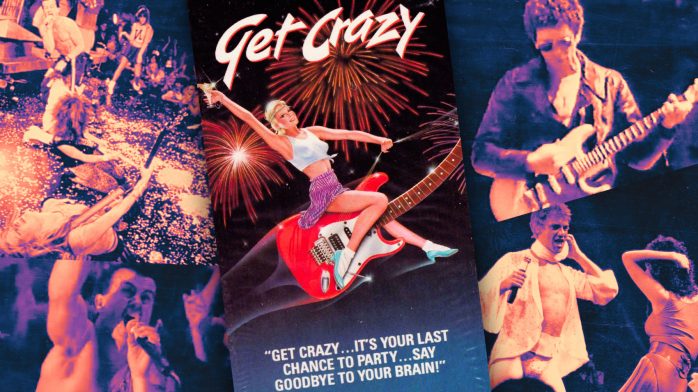 I’m a curmudgeon in a great many ways, but I don’t hate New Year’s Eve. I have been fortunate over the years to have friends throwing cool, crowded parties on the big day; I’ve even gotten to DJ my share of genuinely killer NYE parties over the years. Yeah, people will always get embarrassing in that slow creep to midnight—that old jest about “amateur night” has more than a kernel of truth in it—but it’s all in good fun.

If I’m being honest, though, the idea of attending a sweaty bash this year still sounds fucking nuts to me. There’s a strong likelihood of me staying in as the ball drops. I suspect I’m not the only one. Luckily, as a connoisseur of goofball/trash/punk cinema, I’m not going to be bored as I ring in 2022. That’s because this year, the good folks at Kino Lorber have dropped an early holiday gift: a blu-ray edition of Allan Arkush’s 1983 rock ‘n’ roll screwball comedy classic Get Crazy! If you’re considering being a New Year’s hermit this year, this film comes with my highest recommendation.

Never heard of it? You’re not the only one. Blame the shifty producers, who pulled a real-life The Producers and used the film as a tax shelter, doing everything in their power to keep people from seeing the movie. Instead, they made money by losing money on the film and writing it off as a loss (it’s my understanding that some of these producers later did some time for these kind of practices, but that’s another story).

It’s a dirty shame, because Get Crazy is a blast, and one that deserves to be experienced by more people. Arkush is perhaps most known for making Rock ‘n’ Roll High School, and this is in many ways the logical follow-up to that, though the two films actually sandwich Arkush’s 1981 sci-fi comedy Heartbeeps (a star vehicle misfire for Andy Kaufman). Taking place at a blowout New Year’s Eve rock concert, it’s a live-action rock & roll MAD Magazine, chockablock with slapstick, sight gags, and dopey drug and sex humor. Anyone with a soft spot for Arkush’s more famous earlier film, or other punk/new wave highlights like Urgh! A Music War, will find a ton to love here.

The concert in Get Crazy features some pretty incredible guests, too. Malcolm McDowell turns in a great comedic performance as pompous megastar Reggie Wanker (basically Mick Jagger, with the Doors’ John Densmore as his drummer!); Fear’s Lee Ving is gold as stage-diving animal Piggy (c’mon, you can figure this one out). Some of the funniest scenes in the movie involve Lou Reed as the reclusive “metaphysical folk singer”/Bob Dylan stand-in Auden. Delinquent new wave girl group Nada (a perfect caricature of Blondie, the Go-Go’s, and Toni Basil fronted by Kid Creole & the Coconuts’ Lori Eastside) are perhaps the musical highlight of the film, replicating the rock & roll energy Arkush lent the Ramones for their performance segments in Rock ‘n’ Roll High School.

In fact, and unlike most movies that try to incorporate “live” rock performances (including my beloved, but very flawed, Streets of Fire), the musical segments in Get Crazy are some of its best parts. Arkush has a knack for capturing the rush of live music in a way that’s completely unrealistic on its face, but somehow gets your blood pumping in the same way as the real thing. Before taking up directing, Arkush spent his salad days as an usher at New York City’s legendary rock palace, the Fillmore East, and he worked more than enough concerts in that time to know a thing or two about their energy and mechanics.

There is something of a plot happening in Get Crazy, too, if you’re interested in that kind of thing. In short: it’s New Year’s Eve at the Saturn Theater (a clear stand-in for the Fillmore East), and veteran promoter Max Wolfe (the late, great Allen Garfield, credited here by his given name Allen Goorwitz) is getting ready for a blowout. His stage manager and right hand man Neil Allen (Daniel Stern), Allen’s visiting predecessor/love interest Willy Loman (Gail Edwards), and Wolfe’s sycophantic nephew Sammy Fox (Miles Chapin) are all on hand to assist in and/or sabotage the staging of the event.

Meanwhile, Wolfe is being hounded by his rich, evil competitor Colin Beverly (Ed Begley Jr.) to sell him the Saturn’s lease, and has a near-fatal medical episode in the middle of telling him off. Ever the crafty promoter, Wolfe uses this setback to his advantage, guilting his big-name friends into playing the NYE concert as “a dying wish”. At midnight, despite his poor health, Wolfe plans to cap the night by riding a rocket onstage to the tune of ‘Auld Lang Syne’. Little does he know that a bomb has been planted on the rocket by Beverly’s henchmen, set to go off when the clock strikes midnight!

It’s all just as goofy as it sounds. Arkush’s original plan for Get Crazy was to make a more subtle human comedy about his rock ‘n’ roll usher days (one imagines an early 1980s iteration of Almost Famous, but from the venue angle); instead, the slimy producers coerced him into making something more like Airplane! or Up In Smoke. Arkush was disappointed in the final product for many years, once saying in an interview that Get Crazy was “a movie with three thousand punch lines, but only a thousand jokes”, but he’s also come around more recently as the film’s cult has grown.

I would love to see the film Arkush originally intended, but Get Crazy stands on its own level, and it’s great that it’s finally more widely available. If you’re staying home this New Year’s Eve (or really, any old eve), this nonstop barrage of rock ‘n’ roll silliness should help to ease any FOMO you still have left after the last couple years.