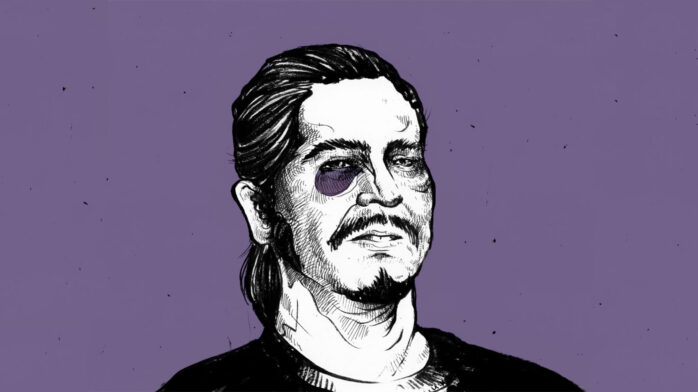 S. Craig Zahler Explains How Neither His Films, Nor Mel Gibson, Are Horror

An accomplished music journalist (he freelanced for the sadly defunct Metal Maniacs), novelist (his latest, Hug Chickenpenny: The Panegyric of an Anomalous Child, was released via Cinestate in January), screenwriter, and filmmaker, Zahler has suffused the gnarliest exploitation fare with unlikely pathos. Take his sophomore effort, last year’s revelatory, Vince Vaughn-starring Brawl in Cell Block 99 — how the fuck do you find yourself crying at the end of a movie where, just minutes earlier, the protagonist stomps an assailant’s face into the floor and drags it until it’s almost devoid of flesh?

Whoops, already breaking my own rule from the first paragraph—the highlight (hell-light?) reel is far from the whole story. The funny thing is, not only does Zahler not see himself as a genre filmmaker, but he takes umbrage with Bone Tomahawk’s classification as horror-western… because there’s not enough horror. The funnier thing: He’s right on both counts.

“This is the thing about genre — pretty much everything is genre,” he observes via telephone from New York during a crippling early March nor’easter. “Now, for many people, there could be a stigma with [the term]—the idea that it’s somehow beneath a movie that I suppose is just a straight drama. But to me, drama is another genre. Like, there isn’t a thing out there that isn’t some type of genre. Most of my work has horror in it, and most of my work has comedy in it. To me, [the aforementioned Bone and Brawl scenes] were just the horrific extremes I wanted those scenes to go to. If Bone Tomahawk were a horror-western—and I thought of it as a hybrid movie—there would’ve been many more horror sequences. Proportionally, you’re not looking at a lot of horror. When it’s there, it’s so extreme that, for a lot of people, it just leaps into that. I don’t know… is Irreversible considered a horror movie? I don’t think so. It certainly deals with extremity. It’s certainly shocking. But I don’t think it’s a horror movie.”

Ironically—or perhaps just aptly—Zahler himself is already, in a way, becoming his own genre. Don Johnson has publicly dubbed himself, Udo Kier, Jennifer Carpenter, and Vaughn “The Zahler Players,” and three of them will appear in the filmmaker’s third movie, the almost predictably awesomely titled Dragged Across Concrete. An action-thriller focused on police brutality, it boasts at least double the budget of Bone and Brawl combined, not to mention a larger theatrical rollout (courtesy of Zahler graduating from RLJE Films to the venerable Lionsgate). But before we pencil Dragged into the Museum of Modern Art’s permanent collection alongside its older brothers (love you, MOMA), Zahler will have to contend with the expectations of bloodthirsty fans curious to see if he can top his Grand Guignol set pieces.

“Those expectations are going to be… not fulfilled as much in the third picture, which is far less gory,” Zahler reveals. “I don’t think either of the first two movies would’ve received an R rating if we’d had to go through the process of getting an MPAA rating. Dragged Across Concrete, as written, was an R. It has less extremity in the violence, much more of a focus on plot. Like Bone Tomahawk, it’s an ensemble cast; you’re getting lots of different points of view, which is kind of what I like to do. I’m not a political person—[I’m] really towards the middle—and to me it’s much more interesting writing people who are all over the spectrum and have all these different viewpoints … not presenting ‘one is right’ or ‘one is wrong,’ but maybe good people who are doing bad things and bad people trying to do okay things to better themselves. It’s just more compelling to me in fiction.

“Lack of pretense couldn’t be more important to me in a picture,” he continues. “I suppose that’s the movie that isn’t the genre movie—something like an Academy Award-winning Moonlight or 12 Years a Slave. I think that both of those are pretty good movies and have some real strong stuff in each of them. But to me, these are dramas, and that’s a genre. In particular, there’s an agenda that’s driving both of them, which in general is not my favorite kind of picture [where] the message is … subtler and mixed in, rather than, ‘Here’s what this movie’s about, and it’s going to let you know, be more tolerant of this and bullying is that and accept this other group.’ I understand that that serves a point for people, and that drives a lot of people to make movies, but it doesn’t drive me to see them, and it isn’t where I come from.”

Which leads to Dragged Across Concrete’s biggest rub: the instantly controversial casting of former Hamlet himself, Mel Gibson. The superstar’s personal issues have been well-documented, from anti-Semitic remarks during a DUI arrest in 2006 to leaked audio tapes of profane, occasionally racially charged arguments with then-girlfriend Oksana Grigorvera in 2010. Zahler is hardly the first director to cast Gibson since—he’s performed in seven films this decade, with at least two in production (including Dragged), and his Best Director Oscar nomination for 2016 war drama Hacksaw Ridge cemented something of a career renaissance. But with #MeToo, #TimesUp, and #BlackLivesMatter still very much at the forefront of the modern cultural discourse, the combination of Gibson’s checkered history, Dragged’s provocative subject matter, and Zahler’s avoidance of “message” storytelling indicates that the filmmaker will surely be in for a challenging promotional cycle.

“The reality is, I chose him because he was fantastic for the part,” Zahler says of Gibson. “If people have decided to condemn him and have that viewpoint, then they can have that viewpoint. If people are open to looking at whatever happened as a mistake in a period of that time and are open to seeing him do work and accept that work at face value, then you can do that. I don’t look forward to being in a position where people are either going to want me to defend him or condemn him. I put him in the movie because he’s fantastic for this role, and people will see that when they see the picture. But discussing the personal lives of actors who I put in my film is not something I’ve done in the past and not something I intend to do in any great detail in the future. Him coming aboard is part of why the movie got made—that’s how something like that got financed—and he was great to work with.

“Back when I wrote in Metal Maniacs, speaking as an atheist, but born into Judaism, I positively reviewed Deströyer 666 and Grand Belial’s Key albums. Actually, I would rank [Deströyer 666’s] Phoenix Rising as one of the 10 best metal albums ever made. I could also not listen to Richard Wagner and not read Charles Dickens, but I do all of those things. My philosophy has always been ‘art over politics.’ If someone’s breaking the law or doing something wrong, that’s kind of the responsibility of the law to take care of.”

The consumption and production of art—specifically outsider art—does indeed seem to be Zahler’s number one priority. He claims to purchase up to 200 metal albums per year (favorite labels: Caligari and Shadow Kingdom), is currently binging on pre-[Comics] Code horror comics, and uses his extra income from optioned/sold screenplays (he estimates the grand total is in the 30s) to afford pulps from the ’20s and ’30s. And lest we forget, his second of two screenwriting credits in 2018 is a parallel universe Puppet Master reboot, Puppet Master: The Littlest Reich (again, what a title!). On top of all that, Zahler is a musician himself, having released three full-lengths with two-man “epic heavy/doom” project Realmbuilder. While Zahler’s filmography has thus far proven inappropriate for a balls-to-the-wall extreme music soundtrack, he has worked with multi-instrumentalist Realmbuilder cohort Jeff Herriott on all three movies. (More dirt on Dragged: Expect “pretty much no score,” but plenty of original music, namely soul and jazz songs. “There are a lot of people in cars, so there’s a lot of spaces to put these tunes in.”)

As far as an improbable—and at this point unnecessary—return to the world of metal journalism is concerned, don’t hold your breath (although Zahler does still post on Metal Archives from time to time). An editorial position at Maniacs was offered to him at one point way back in the day, but Zahler was more interested in reviews than interviews. “It didn’t go over well when I gave Bruce Dickinson a quiz on metal and prog rock and asked which was the best Pink Floyd album. He said Dark Side of the Moon, and I said he was wrong, it’s Animals,” Zahler laughs. “He was not taking it in a humorous spirit at all.”

Ultimately, the full-time journo gig wasn’t Zahler’s thing, and we’re all the better for it—although it’s nice to reaffirm that those who do also write reviews. “I knew working full-time listening to this music wouldn’t be a good way to maintain my interest in this music,” he admits. “I think it’s just gonna fry you. If you need to listen to stuff you don’t like and then interview those people, uh, not so great. If someone is really into metal and starts talking about HammerFall and Fear Factory and Slipknot, I would rather that they weren’t into metal. I would rather someone listen to no metal than Slipknot and Disturbed and Limp Bizkit and all of that shit.”

Considering that this conversation takes place the same day that news breaks of Fred Durst directing John Travolta in a loosely autobiographical stalker-thriller, I can’t help myself:

Besmirching a fellow filmmaker, Fred Durst. How dare you?