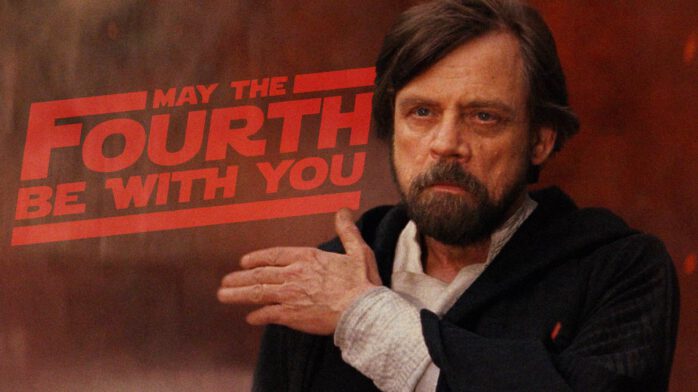 May the Fourth will be bigger than Christmas

Believe me when I tell you, May the Fourth is going to be bigger than Christmas. Well, ok, maybe not bigger than Christmas… but, it’s definitely in the running to be the next Halloween. And if you find it absurdist that an up-and-coming punk-ass holiday known to many as “Star Wars Day” could usurp a festive juggernaut like Halloween, then you might want to hold on to your butts.

I’m no Jedi, so I don’t know for sure what the most popular holidays are in these United States are; but if I had to take a guess, I’d put ol’ Christmas up top, Halloween not too far behind, and Who-Really-Knows? slugging it out for third (Valentines? Thanksgiving? Arbor Day?). Point being, the more successful holidays always seem to be be infused with imagination.

Seriously: Besides begging for chocolate, making believe is all Halloween’s got. Sure, Christmas has that whole religious angle, but most people are basically just superfans for characters like Santa Claus, Rudolph, and maybe Jack Frost. Not to mention that whole gift thing—if you’re thrifty like me, you’re always elfishly making presents come December.

Which brings me to May the Fourth. It has all the costumed potential of a Halloween, plus the fanaticism of a religious holiday. Having been to numerous comic conventions, I feel pretty comfortable with stating that. You see, it’s my opinion that the strength of Star Wars lies in its ability to fire up the imagination, and that all the best parts about its galaxy live inside the creativity of its fans.

At this point you might be thinking, “Yeah, that’s great and all if you wanna dress like Yodar, but I don’t even really like the Star War. I’m more of a Pot Head” (a.k.a. Harry Potter fanatic). Don’t even trip, boo.

I’m not sure if you’re aware, but Star Wars apparently happened a long time ago in some galaxy far, far away. But that galaxy lives snugly in our own universe—the same universe that also has Ghostbusters, Infinity Gauntlets, Mad Maxes, and Captains Kirk. Don’t believe me? Han Solo himself said it was all true (and don’t tell me that the great Doctor Jones isn’t somehow distantly related to Solo, because the similarities between the two are impossible to ignore). And more to the point: who cares?

So, if you plan to crash the bar with a coterie of witch hat-wearing friends, but then suddenly you feel like Amelia Earhart in ruby slippers and a Cubbies hat… that’s alright by me. Because—and this can not be stressed enough—it’s not actually “Star Wars Day!” It’s May the Fourth; the day where you let your fandom freak-flag fly, no matter what that fandom may be. The way I see it, even the most die-hard Star Wars haters will soften as May the Fourth parties begin to multiply (along with chances to hook up with Vader-masked freaks).

The rise of May the Fourth will take some time. I see it coming together by the year 2069 or so; long enough for all of today’s remaining elders to be dead, leaving no one left on Earth to remember life B.S.W. (Before Star Wars). By then, this fringe holiday will have become a hallowed tradition, finding excited revelers loading up on blue moloko plus, busting out the antique Vulcan ears, and taking in some Logans Run. However the day is celebrated, the Force will still be with everybody.

Oh, and in case you were wondering, Revenge of the Fifth—or Sixth, depending on what camp you’re in—is never, ever going to catch on.

geeks may the fourth star wars