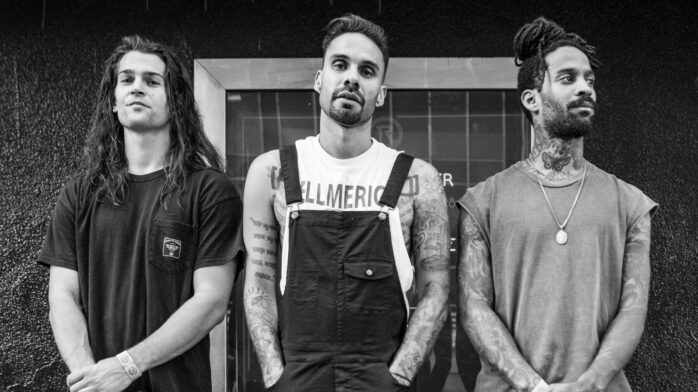 “We’re Going to Make A Point”: The Fever 333 is Taking Action, and You Can Too

The Fever 333’s first-ever show was out of a U-Haul truck in the parking lot of Randy’s Donuts in Inglewood, California on July 4 of last year—a much-hyped gig to introduce a band that has, in short order, become one of the most compelling protest acts to come out as a result of the new administration, drawing comparisons to the rally cries of N.W.A and Rage Against The Machine. See for yourself:

“Everybody wants something different, everyone’s talking; but for me and my friends, we want to make a change and today we’re going to make a point. We’re going to show them that we’re not going to be compliant, we’re not going to be quiet, we will assemble, and we will do what we need to do to make sure that that change will happen,” says frontman Jason Aalon Butler in black-and-white video footage of the event, admonishing the racial and social unrest in his neighboring California hometown.

In the weeks prior to this debut, there’d been much anticipation for the new project from Butler (who had wrapped up his final days with post-hardcore act Letlive a few months prior) and his bandmates, former the Chariot guitarist Stephen Harrison and Night Verses drummer Aric Improta. The trio collaborated closely with Blink-182’s Travis Barker and Goldfinger’s John Feldmann on Made An America—dubbed “album of the year” by Afropunk when it was released last March.

The Fever 333 has since been drawing some of the biggest midday crowds at several festival appearances in the past few months fueled by anthemic tracks like “Walking in My Shoes” combined with provocatively visual and incredibly physical spectacles that embody the spirit of riot and unrest. “The movement is happening. People want this change, and we are here to provide the soundtrack,” says Butler.

He discusses more about the band and the ideology with Riot Fest.

RIOT FEST: You call your concerts “demonstrations.” What’s the idea behind your live show?

JASON AALON BUTLER: We want to provide a safe space for people to interact and have conversations. It’s really about inclusiveness for everyone, anyone that wants to speak their minds and use their voice. I’ve had this sort of vision for a project for a long time, to create an experiential scenario that you can interact with—in this case, we’re trying to talk about the bigger conversations in these demonstrations.

We have to challenge ideas while we are together and really open our minds and eyes to the fact that these are very dire and critical times and there are uncomfortable things happening in this world, and if we can’t discuss them in a safe place then we’re not going to be able to discuss them at all.

The Made An America EP is very overt in its themes of exposing racism and inequity, while encouraging revolution and also empathy. What do you want people to take away from the music?

This whole project lies upon a foundation of what I call the “3 Cs,” the letter C being the third in the alphabet, hence our moniker. Those pillars are community, charity, and change—things I find to be most important to move forward as a society.

I hope by sharing this project we build a community and make people feel they have a place in this and can be a catalyst. Every time we have a demonstration we also pick a local charity to donate to because we believe that movements start locally and can then assimilate outward.

The change is anything people feel they need to change in themselves. That’s the most local you can get. We want to start there and try to move outward.

The material may not sit well with everyone. Have you felt any backlash?

It would be naïve of me to think there wouldn’t be backlash. Everything creative is going to have an oppositional view, which I think is necessary. We’ve had some backlash. At our shows, we have heard people agreeing with some of the things we try to oppose, like racism and homophobia.

I’m not afraid to have those conversations. I welcome them and encourage them because we can’t just keep yelling into an echo chamber and expect change. We can’t expect things to be different if we only speak to people that agree with us. There’s a whole world out there that feels differently and we need to acknowledge them too, that they have a place in all of this.

When the Fever 333 started taking roots, Letlive had just disbanded. Did one have to do with the other?

Letlive had already started discussing our future—or lack thereof—as I wanted more for myself as an artist and wanted things for my art that I didn’t feel would be appropriate or necessary to impose on others that made up the Letlive team and family. If I was to carry on with that project and wasn’t firing on all cylinders, it would have been disingenuous and antithetical to what Letlive was, which was being open and honest and vulnerable.

I think the most vulnerable thing I could have done was admit to myself and others that it was time for Letlive to cease. The Fever 333 started when Travis Barker, John Feldmann, and I got together one night—Super Bowl Sunday last year, actually—and discussed what we wanted to see and hear out of music and culture.

We were listening to Fishbone and discussing punk rock created by people of color. I was in a place where I was really open about my bi-racial background and trying to understand my place not only in music, but the world; and realizing there were many other people that felt the same way I did, whether they were biracial, or trans, or queer or whether they just felt out of place.

This feeling that I dubbed my biracial identity crisis has been the focal point of this project, understanding we all have an issue at some point with where and who we are and how we fit into this bigger picture. It’s been such a privilege to have the support and talents of Travis and John, especially as a kid who used to listen to their music and geek out over everything they did.

You are often compared to N.W.A. and Rage Against the Machine. Were there bands or artists you took cues from in creating this project?

Bob Marley was a big one. The cultural and global shockwaves he was able to make with music were really incredible, and that kind of informs the direction I’d like to take with the Fever 333.

Of course Rage Against the Machine are still one of the most notable names in this type of protest music. N.W.A., to me, is easily one of the most important groups of my notable musical memory. My first loves were hip-hop and R&B before I started gravitating toward punk rock.

One thing I admired and loved was the reflection of their own reality—a really difficult reality, where people were acting as if it wasn’t there. I found it very interesting that their adversity-riddled lifestyle they came from captivated people.

Beyond the charities you partner with, how does the vibe of a Fever 333 show continue after the last song?

I’m starting a foundation called the Walking In My Shoes Foundation, which will present more interactive experiences. At every event, we’ll have people offer their stories of societal issues they have dealt with, and will have a pair of shoes in their size so you can come and literally try them on and, for a moment, try to put yourself in these scenarios.

We put together one to discuss the social and gender wage gaps throughout America, with drinks that had different costs for men and women to show the gap in the workplace. We also had white shirts and black shirts for sale that had a price difference to represent the cultural wage gap.

If you attend these events you can’t avoid the issues, and we donate proceeds as well. Beyond that and spreading the word on social media, I try to also be involved by going to protests, city hall meetings ad really being a part of the people’s movement. The band didn’t start a movement, we’re alongside of—and advocates of—a movement that’s already been happening. It’s outside your front door if you open your eyes and take a look.

Take action, and join the Fever 333 at its next Chicagoland demonstration: Riot Fest 2018, September 14-16 in Douglas Park. Get your tickets now!

Letlive rage against the machine riot fest presents The Fever 333