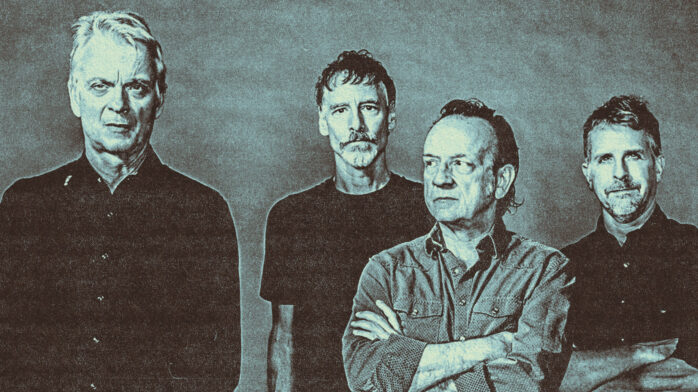 “The f*#kin’ Jesus Lizard, man.” That’s how people talked about them back in the day, a sentence fragment usually uttered in either a whisper or bemused snicker. The Jesus Lizard were too good to be ignored, but they’d never be ready for prime time. They were too weird, too ugly, too real. If they caught their fair share of shit from indie purists when they signed to a major label, it was as much because of befuddlement as corporate skepticism: how the hell was this band gonna go over on “modern rock” radio, sandwiched between Pearl Jam and Better Than Ezra? The answer, of course, was that they weren’t, but still, they were on the edge of mainstream radar: more popular bands than them regularly sang their praises (and of course, David Wm. Sims and David Yow’s prior combo, Scratch Acid, a gnarled combo of punk ferocity and punch drunk, mid-tempo menace, were a cornerstone influence on Seattle grunge). They made national headlines for indecent exposure on Lollapalooza’s main stage in 1995. Hell, even Beavis and Butthead were talking about them.

Shit, in American indie rock, absolutely nobody was cooler than the Jesus Lizard. Why do you think Nirvana recorded In Utero with Steve Albini, and filled that record with those garbled, dissonant guitar leads? Pretenders to the throne, my friends!

In that sense, among others, the Jesus Lizard have a lot in common with their ooze-rock forebears in the Stooges: loved by musicians and miscreants, even as they were dismissed as a gross novelty by polite society. Like the Stooges, the Jesus Lizard have also been increasingly embraced in the years since their original 1999 breakup. Of course, both bands are also similar in that neither David Yow nor Iggy Pop can wear a shirt onstage for more than five minutes, and both have had a historical tendency to let their dongs slip out during a set (will You bless the crowd with a Tight ‘N Shiny  at Riot Fest this year? I guess we’ll see how many cops are around).

The Jesus Lizard’s music was drum-tight, but it’s the tension between that and Yow, a frontman as loose and slippery as a wet kitchen garbage bag full of Budweiser, that really makes the magic. The resulting whirlwind of sweat, blood, and jazz scales roughly evokes Nick Cave’s old band The Birthday Party, had they been raised in the house from Texas Chainsaw Massacre. Plenty of “noise-rock” punters in the ’90s worked this nasty angle with varying degrees of success, but the Jesus Lizard were operating with a more convoluted, precise calculus than almost all of ’em.

Really, the Jesus Lizard would have been perfectly in their right if they had just gotten out when the gettin’ was good and left a bunch of babbling acolytes in their wake. By intermittently coming back, though, they’ve revealed that their grotesque mania was not reliant on being young, dumb, and fulla cum. Duane Denison, David Wm. Sims, and Mac McNeilly play like they practiced every day for the entire time they were broken up. Yow’s probably gotta do a couple extra morning stretches, and drink a couple less drinks, to pull off all that hectoring and stage-diving at the ripe age of 57, but he’s still scary good at what he does. Whether they’re reuniting for fun or for money, they’re sure as hell not phoning it in.

As the 1990s get smaller in the rear view mirror, the icons of the era come into higher contrast, like glowing fast food signs towering at the edge of a passing roadside town. Things that seemed important in popular music back then — the Macarena, Coolio, Geggy Tah (okay, nobody ever thought Geggy Tah was important) — will continue to fade into the distance. The Jesus Lizard, however, aren’t just one of the signs: they’re the electricity powering the town, making the whole damn operation work.

Nah, just kidding: the Jesus Lizard are a gas station fire down the road from the Taco Bell, lighting up the night, scaring the shit out of everyone, and leaving the earth scorched. It’d be pretentious to instill too much meaning into such an event, sure, but if you saw it, you sure as shit wouldn’t forget.

(If you know what’s good for you, you’ll see the Jesus Lizard at Riot Fest in Chicago this September)