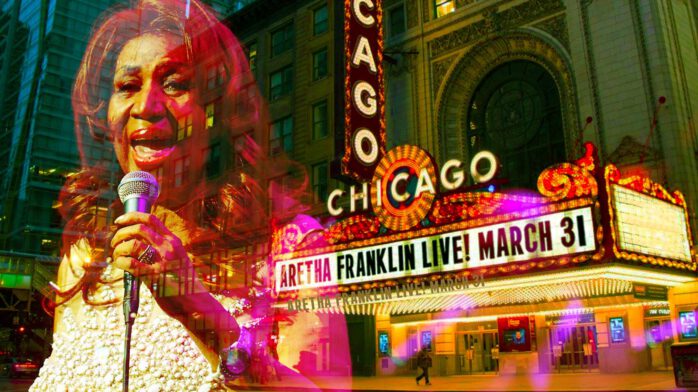 By the time the “Queen of Soul” Aretha Franklin strolled out onto the stage of the Chicago Theatre on the night of March 31, 2017, she’d kept the audience at what would turn out being her final live Chicago performance waiting for some time.

The show, after all, was a rescheduled date after the original gig — initially slated for three and a half months earlier — was canceled due to inclement weather. But after the lights went down and Franklin’s 15-piece orchestra and backup singers took to the stage, any ill will sparked by the postponement had dissipated and the room — myself included — was ready to bear witness to a legend who had just announced her imminent retirement from touring.

And then, in the dark, we waited. The orchestra and singers sat and stared blankly forward in silence for what felt like hours. We in the audience murmured and clapped and my thoughts wandered: ‘Had something happened? Were we at the show where this momentous career came grinding to a stop?’ I couldn’t shake the feeling that something was wrong. Was Aretha, who by now was already the subject of many years of rumors concerning her apparently deteriorating health, OK?

After probably 15 minutes of my escalating dread, there she was. Franklin was radiant, beaming and sparkling in a white gown, as though nothing had happened and launched into a triumphant “I Knew You Were Waiting (For Me),” a hit she recorded with the late George Michael in 1986.

All was forgiven and forgotten as Franklin proceeded to bob and weave through hits and deep cuts, hymns and pop gems over the course of a nearly two-hour set. She danced, joked and sang — beautifully, of course — never giving any real indication that this magic was fleeting, that the then-75-year-old’s time in the spotlight was truly nearing its end.

Throughout the show, Franklin’s genuine adoration for Chicago was front and center. It is here, after all, where she famously earned her “Queen of Soul” moniker from WVON’s Pervis Spann after he watched her sing at the venerable Regal Theater in the 1960s.

Franklin actually got her start on the gospel circuit when she was in her teens performing in shows in Chicago and staying with Mavis Staples’ family on the city’s South Side, her former publicist recently told CBS Chicago. She closed out gospel icon Mahalia Jackson’s funeral with the hymn “Precious Lord, Take My Hand” at McCormick Place in 1972. And, of course, “Blues Brothers” wouldn’t have been the same without her performance of “Think.”

But perhaps no moment felt more Chicago than when she greeted her well-known friend, the Rev. Jesse Jackson, in the front of the house before launching into “Freeway of Love.”

“Hello to the Jacksons!” Franklin said before getting in a crack at his son, who’d been released from prison just two years earlier: “And hi to you too, Jesse Jr., haven’t seen you out for a minute!” The crowd chuckled.

The show came to a close with a joyful encore that veered from the expected — a jovial “Respect” — to a surprise: a stunning, pitch-perfect cover of Lena Horne’s “Believe In Yourself” from the Broadway musical “The Wiz.” Finally, there was Franklin dancing, grinning and laughing along as her band played “There’s No Business Like Show Business” as her outro.

And just like that, it was over. Franklin went on to play one more show in the Chicago area — a Sept. 3, 2017 performance at the Ravinia Festival in Highland Park.

That show would end up being her second-last live performance, followed only by a three-song set at the Elton John AIDS Foundation’s 25th Gala in New York City last November. The Ravinia show, her eighth at the North Shore venue, was described by reviewers as “nothing short of regal” and “in fine form” and one review in particular noted that Franklin had described, during her set, how she told the audience, “See you next time” before disappearing behind the curtain.

Following Franklin’s death Thursday morning in her Detroit home, there won’t be a next time for music fans in the Chicago area or anywhere else.

And that’s a shame. As fellow musician Billy Preston once said of Franklin, regardless of what had become a growing reputation for canceled shows and certain tendencies some might criticize as diva-like, “on any given night, when that lady sits down at the piano and gets her body and soul all over some righteous song, she’ll scare the shit out of you. And you’ll know—you’ll swear—that she’s still the best fuckin’ singer this fucked-up country has ever produced.”

Put another way, in the words Thursday of singer-songwriter Joan Armatrading speaking with BBC Newsnight, “when you hear her [Aretha’s] voice you can actually hear God.”

Aretha Franklin was a hero to me and so many others. I deeply admired not only her singing ability and dedication to both her craft and her activism, but also her resilience, wit and expert-level shade-throwing. Remember that time she sent a fax to the Associated Press in an attempt to settle a five-year-old beef with Dionne Warwick? Or the time she applauded Taylor Swift for her “great gowns, beautiful gowns”? They don’t teach this stuff in school. This is icon level, kids.

Deaths like Franklin’s — and artists like Prince, David Bowie, Merle Haggard and Lemmy Kilmister’s before — remind us just how otherworldly it is to be able to witness that lightning being caught in a bottle and shaken up before our very eyes, and to be able to hold onto that glorious memory in our back pockets for whenever we might need it for years to come.

And these deaths also remind us of the importance of supporting the artists we love while we still can — because the next time the lights go down and the band files on stage, your hero might be missing, too.

So go ahead: Show some respect, buy that ticket and attend that show. You’ll be glad you did.