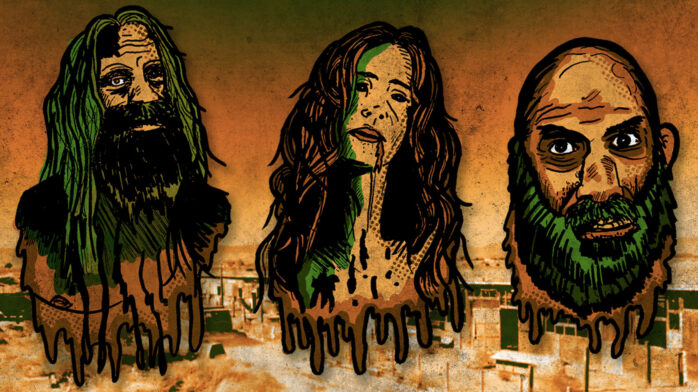 This year brings 3 From Hell to theaters, the third part in Zombie’s trilogy of Mansonoid serial killer movies, along with Quentin Tarantino’s Manson film Once Upon a Time In Hollywood; both explicitly detail aspects of the killings through their directors’ obsessions and fetishes. Zombie and Tarantino have been playing with Manson family imagery and quotes for years now, and both films are perfectly timed to have been written following the real life death of Charles Manson and the release of Leslie Van Houten. Viewed politically, these movies are also timed to be the dial on the pressure cooker of a country that’s gone insane—the constant churn of sexual scandal and political corruption unleashed by Trump’s election makes the Manson trials feel more current. While 3 From Hell looks like a movie about the characters we see in Devil’s Rejects, it’s still a very different beast. Rejects is a western.

“The Western,” by nature as an American-born art form, is forced to deal with the idea of America as a concept. Every attempt at doing something major in the genre requires its author to make a hard decision: whether they want to make a political film or not. The best horror films of the ‘70s swam alongside that; The Wild Bunch and The Last House on the Left are grappling with similar concepts of a country poisoned by its own capacity for violence, and The Devil’s Rejects was created and released in an era surrounded by a lot of lip service of the politics of horror films.

The War on Terror parallels in The Devil’s Rejects are pretty obvious, but also cooked down to the moral universe of a western: conflict and retaliation. Sheriff John Quincy Wydell’s brother is killed, and in his pursuit of the mass murderers who did it, he becomes worse than they ever were. Like Roman Polanski’s Manson-inspired Macbeth, it’s the story of a man falling in the face of a crisis—meeting the challenge, but destroying his soul in the process, and with all the attendant ghosts and curses that entails.

The “torture porn” strain of American horror films was often discussed as the psycho-social aftermath of the War on Terror—a leaking through of our guilt in the tactics used without our consent. Which, of course, is in some ways true; what we enjoy, what’s reflected back at us, has everything to do with certain events in history hitting when they did. But it’s also bullshit. The commercial end of a previous decade of extreme cinema and general boundary pushing is why the Hostel and Saw movies connected. Rejects is the only movie of the era that confronts the political nature of torture, likely because of its conceit as the collision of a modern western and a ‘70s throwback horror film.

As a throwback flick, there’s references to the Texas Chainsaw Massacre films strewn across nearly every Rob Zombie film. But with The Devil’s Reject, the series’ third entry Leatherface comes to mind. Rejects takes specifics—Ken Foree’s last minute savior turn, certain gore shots and lines of dialogue, the Sawyer house burning—and repurposes them into a movie that is closer to the first Chainsaw film. Tobe Hooper’s Texas Chainsaw was horrifying and rich, but it functioned as social criticism through character. The first film dwells on mechanization, gas shortages, unemployment, the way families fill vacuums in gender roles. Rejects feels like Zombie saw the gems in Texas Chainsaw Massacre III and wanting to apply that to a movie that has the spirit of the first.

That spirit shined through in Zombie’s filmmaking, where every decision allowed The Devil’s Rejects to hit harder. Multiple handheld cameras—usually a hindrance on a lot of modern horror’s impact—were used to emphasize the documentary style. Scenes often transition on sound rather than visuals. Low budget, small scale sets and costumes help realize the ‘70s setting and soundtrack, as well as a cast built on veteran character actors, many from the era. Zombie hits a stride that Peckinpah and Eastwood rode in back the ‘70s where his actors look old and exhausted, giving performances with a weight and grace that a younger cast just couldn’t muster.

As a western flick, Rejects is structured like The Wild Bunch, beginning with another film’s climactic shootout, bifurcated narrative, and concluding with a suicide run. The most reprehensible characters take respite in a whorehouse. Slow motion is used to crystallize damage and elongate impact, and conversations play like dogfights unless defused—the phrase “fuck you” is said so much in Rob Zombie’s work that it takes on its own nuance. But The Devil’s Rejects doesn’t share the same moral center. John Carpenter described The Wild Bunch as “morality rising out of killers,” representing the toll of a life of violence met with a self sacrifice at the end—something the killers didn’t know they were capable of. The Devil’s Rejects is the reverse of that story, where the murderers are shown to be as capable of fear as they are violence. Zombie is looking for the limits in his audience, whether it be limits of violence or mercy.

The first half of the film follows the Firefly family on a Mansonoid rampage across the desert, centered around a nightmarish hostage situation in a hotel room; the second half is Sheriff Wydell’s revenge movie. While most evocations of Manson in movies have been about the dangers of youth culture or groupthink, Zombie leaves the ideology to hang, keeping the fascinating parts of that mindset. People can be manipulated through intimidation, and when that stops being fun, you can do whatever you want to them. The claustrophobia in a room, one where every exchange is met with raised guns and locked stares, is a thousand times more interesting than flower power hippies turning violent.

In his final scenes, Sheriff Wydell takes on all the malicious, sneering rage of the Firefly Family. Like Wes Craven, Zombie knows that true horror isn’t being mutilated or tortured; it’s the killer mocking your pain like a schoolyard bully. The traditional revenge narratives in film over the past few decades tell of the redemptive power of violence, but this isn’t that. In Rejects, violence destroys confused civilians’ lives, but poisons the just. The difference between Wydell and the Rejects is ideology: they believe in nothing, and justify nothing. Wydell mentions God in his first line: “It’s time to execute what the good Lord would refer to as a cleansing of the wicked. And what my brother George, God rest his soul, would call a 100% Alabama ass kicking.” His belief becomes more and more a justification every time.

The most defining scene is Otis’ murder of two civilians. Otis’s “I want you to pray to your God” speech is a naked confrontation to the world that has, so far, shown no recourse for any action he’s taken. A simple reading would be for Wydell to be the holy retribution, but that would miss the self-destruction: Otis’ windblown hair, Geoffrey Lewis terrified eyes, Lew Temple’s blood-choked screaming. Lewis, one of the killers from Clint Eastwood’s High Plains Drifter (another western that Rejects interlocks with on a pretty complex level), is met with the same violence he doled out in that film—the scene framed exactly the same, only now he’s the victim. And unlike that scene, we can’t see his eyes. Rejects gives us a world where all actions lead to torture, dehumanization, and cruelty—even when the good set out to do what is right. Everything it touches is built to forward suffering. This is hell.

Sean Witzke is a writer, critic and editor whose work can be found at sean-witzke.com.