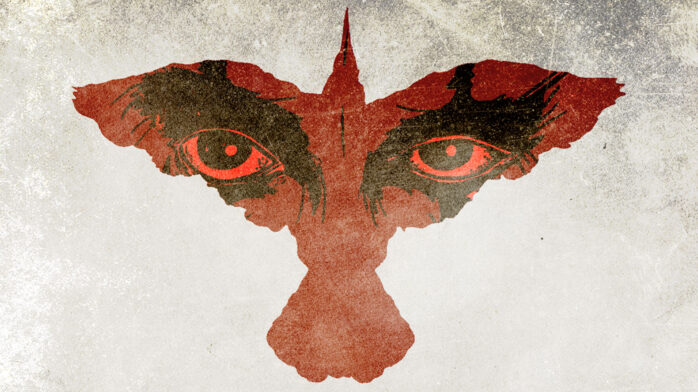 Unlike the precisely stylized logo its protagonist renders for himself within a contour of fire, The Crow is something of a Rorschach test. Maybe it conjures memories of Brandon Lee, a charismatic rising star who shockingly died mid-production, a haunting precursor to Heath Ledger in The Dark Knight with little of the posthumous accolades. Maybe you ponder the fortunes of coulda-been-visionary Aussie director Alex Proyas, whose cult classic made bank, yet did not generate an audience for his outlandishly inventive follow-up, Dark City, Roger Ebert’s favorite film of 1998. Maybe you long for the days when Hollywood took Mike Trout-caliber cuts on obscure, hard-R, proto-superhero IP, years before Marvel’s homogenized dominance. Maybe you’re already Pavlov-thrashing to the incredible soundtrack (today celebrating its 25th anniversary), the best-curated and most thematically appropriate hard rock OST in a decade rich with challengers.

Or maybe you think of fucking mall goths.

Everyone has a different perspective on the origin of this delightful subculture; reason being that someone like Chuck Klosterman inexplicably has yet to write a definitive 50,000-word history. Accordingly, a Google search of “’80s mall goth” is inconclusive; there’s a couple grainy snapshots of guys and gals peacocked like Siouxsie or Flock of Seagulls, but those could be stills from season three of Stranger Things for all you know. Hot Topic opened its first store in 1989, and Gadzooks was only Texas-regional in 1992; before then, if you wanted to dress like a clown prior to mowing down a corn dog, you had to go to Spencer’s Gifts. So, we’re obviously not saying that The Crow invented mall goth in 1994, but it definitely took that shit mainstream.

Before we proceed, it should be noted that I am the wrong person to goof on anyone’s sartorial decisions now and especially then; a five-foot-seven, 120-pound 17-year-old should perhaps not have been toddling around high school in XL bootleg In Utero shirts and burgundy cords. That said, Brandon Lee’s instantly iconic look—black leather pants, black lycra long sleeve, full-length black leather trench coat—was tailor-made for wack copycatting, even without the optional demented clownface. Sure, industrial was a thing in 1994, but a niche thing; Ministry and Nine Inch Nails had made inroads thanks to Lollapalooza and MTV, but The Crow opened on 3,000-plus screens. Slightly bigger reach, no? Marilyn Manson, The Matrix, and (sigh…) the Trenchcoat Mafia were not things. As far as bands like Bauhaus, Joy Division, Killing Joke, the Birthday Party, and Love & Rockets were concerned, well, those were for real goths, not posers. Not kids who loitered in Denny’s wearing crushed velvet, fishnet sleeves, and bondage pants.

Granted, the lines have been blurred enough that it’s hard to determine whether even South Park’s arguably best minor characters are real goths or mall goths. One would think the former, because a) they don’t wear branded My Chemical Romance or Slipknot gear a la Stuart’s sweet Winger tee in Beavis & Butt-Head, and b) they literally set a Hot Topic on fire. And yet, they revel in a variety of other mall goth cliches (extreme loitering, expressive dancing, liberally throwing around terms like “poser” and “conformist”), ironically or not. When it comes to Lee’s Eric Draven, he has the look for sure, but only kind of the attitude.

Unlike the average mall goth, he is a doer. With the help of a magical crow that makes him invincible as long as said crow is not injured (just go with it), he exists only to hunt down and slaughter the men who raped and murdered his fiancée. That is his sole raison d’être; the bad guys killed him, too, and he will die again, permanently, once he completes his task. One could debate whether he’s having fun completing his task (fun is neither real goth nor mall goth), or if he simply indulges in the sporadic taunt when the mood strikes. He winkingly references The Raven and tells a crucifixion joke before disposing of assorted henchmen, and gives Ernie Hudson’s poor befuddled beat cop all sorts of shit for just doing his job. But Draven is also a serious doomed romantic, which sometimes results in the kind of well-meaning bromides (“Little things used to mean so much to Shelly—I used to think they were kind of trivial. Believe me, nothing is trivial”; “It can’t rain all the time”) that are (moldy) bread and (rotten) butter to mall goths.

And let’s not front—the music had as much influence as the character. This was not a case of an Armani-clad sentient soul patch choosing which Papa Roach b-side best matched Vin Diesel. This soundtrack oozed style, and “Music Inspired by the Motion Picture” is generally not a disclaimer to be trusted. If you’re lucky, one of the participating artists gets access to the script and has the time to crank out new material that’s at least tangentially relevant to the subject matter. (If you’re unlucky, that artist is Prince and you get the Batman soundtrack!)

In the case of The Crow, there are two exceptional examples of the former. Opening track “Burn” may well be the Cure’s last moment in the sun (figuratively, duh). It’s certainly not their last great song, but arriving shortly after 1992’s multi-platinum Wish, it was a roiling, funereal thundercloud that portended their (to date) final four critically and commercially disappointing albums. They even go the extra mile and sample crows cawing—Robert Smith has a flair for the theatrical, you might have heard. Not to mention the man looks, well, not like the lithe, acrobatic Lee, but close enough to the Eric Draven of O’Barr’s graphic novel, a story deeply affected by the Cure and Joy Division.

The other killer “inspired by” jam is bookend “It Can’t Rain All the Time,” a delicate Jane Siberry ballad that makes Draven’s verbatim observation, well, even cheesier. But if you’re in the right mood, it also happens to be gorgeous, melancholy sentiment that is evocative of the title character’s painful journey. As for nearly everything else between “Burn” and “It Can’t Rain,” watch out! Three hellacious covers from Rollins Band, Nine Inch Nails, and Pantera (“what makes a person wanna be a cop,” indeed!); Stone Temple Pilots nailing the epic bittersweet vibe with “Big Empty”; Helmet and Rage Against the Machine administering downtuned elbow drops that, well, have shit-all to do with the Crow, but rip anyway!

We know what you’re thinking: A selection this diverse, challenging, and (occasionally) adult does not exactly scream “mall goth.” Well, take it from someone who spent ample time in the food court staring at them: They were listening. And in the darkest recesses of their bedroom, dancing, expressively. Eventually, they left the mall, drove home, peeled off the vinyl, washed off the eyeliner, graduated high school, and—like all of us—grew up. And as former real goth/Breakfast Clubber Allison Reynolds famously observed before her own lame normie makeover: “When you grow up, your heart dies.”

If it’s already black as hell, though, maybe not. Maybe it swells. Maybe when the mall goths of yore stroll past Zumiez with their kids, it pumps that toxic blood that much harder. And when a notification pops up in their news feed about that long-gestating, maybe-dead, maybe-not Crow reboot, you better believe that thing’s on the verge of explosion.