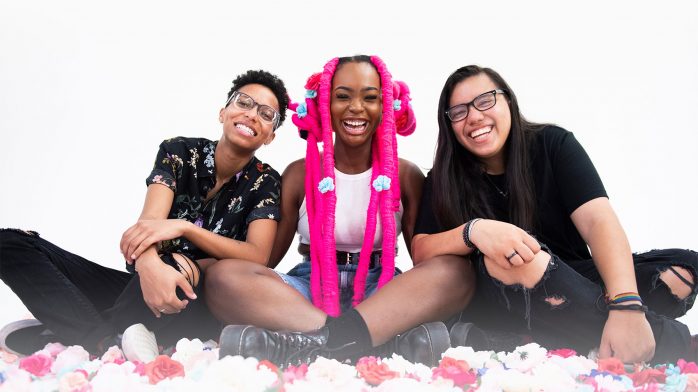 An interview regarding The Sims, denim shorts, and the band’s rise to fame during quarantine
By Sydney Johnson / May 3, 2021 / Features, Interviews

For Gen Z pop punk trio Meet Me @ The Altar, 2021 has already been an eventful year so far—with the release of their most recent girl-power pop punk anthem, Hit Like a Girl, cyber-acknowledgements from beloved bands like All Time Low, and a feature in Rolling Stone. Their upbeat and somewhat nostalgic brand of pop punk even earned them a spot on the Fueled By Ramen roster in 2020.

In true Gen Z fashion, Riot Fest spoke to the members of [email protected] via Zoom, where we discussed how they discovered All Time Low through playing The Sims 4, the band’s virtual formation via Youtube, and how “Tumblr pop punk” is still alive and thriving.

RIOT FEST: Word on the street is that you guys met online. Can you give me the Meet Me @ The Altar origin story?

TÉA CAMPBELL (GUITAR/BASS): That was such a fun summer for me [in 2015]. I was staying at my grandma’s house in Virginia. It was the summer that Hot Topic was poppin’—I was there like, every other day trying to find an emo girlfriend. I was bored and  looking up some drum covers on YouTube, and I found Ada’s drum cover and thought, “Woah, this is super good… and this is a super sick girl who’s around my age and killin’ it.” I commented on her video asking to collab, and she gave me her KIK… that’s a sign of the times.

ADA JUAREZ (DRUMS): I remember you sending me a picture of your computer screen where you were recording guitars for something, and being like, wow she has equipment, knows how to play….why would I not want to do something with her?  And Edith, literally found us from the algorithm on Youtube.

EDITH JOHNSON (VOCALS): I saw Ada’s video “I’m In A Band And We Need A Singer” on Youtube and I already mentally decided I was in the band. I hadn’t tried out yet, but I’m in the band. Once I tried out, they didn’t choose me, but I was like… I’m still in the band. In the beginning, I was so determined that I wouldn’t stop until I was in.

CAMPBELL: She messaged me for two years like, “Have you guys added a singer yet?” We decided to try it out and do a cover of Neck Deep’s “In Bloom,” and once we came together, we knew this was it.

It’s so funny to hear  how persistent you were.

JOHNSON: It’s a weird quality of mine.

It’s a great quality to have. So since you guys came together on Youtube, this is the perfect opportunity to ask—what does your Youtube Homepage look like? What kinds of stuff do you watch?

JOHNSON: I watch a lot of Cody Ko and Noel Miller. And Kurtis Conner.

Of course. We love that.

JUAREZ: A lot of Sims 4 stuff…

Hell yeah! Would y’all want to record a song in Simlish?

CAMPBELL: Being on the Sims soundtrack… that’s a goal. The Sims is literally how I discovered All Time Low! I was listening to the [in-game] radio, and there was a Simlish version of “Time Bomb” and I was like…What song is this? It sounds so good!

CAMPBELL: Oh! And I also watch lots of weird meme stuff like Vines, and stufflike “short videos saved on my phone without context.”

Like that video of the woman screaming “No pomegranates?”

Aside from Riot Fest, of course, do you guys have a dream venue or festival you’d love to play?

JOHNSON: I’d love to play Coachella. And the Tabernacle in Atlanta. Really, any ridiculously huge arena.

CAMPBELL: I really want to play Chain Reaction in California, it’s like, a right of passage.

JUAREZ: Starland Ballroom. Just because, I used to go there all the time. It’s like, my childhood venue.

CAMPBELL: My dream lineup is Paramore, All Time Low, and The Story So Far.

Edith, you obviously have a great singing voice. But you decided to be in a pop punk band… where you don’t need to be good at singing at all. You clearly have a unique advantage there.

CAMPBELL: Well, When Edith joined, we had to have that conversation because it was hard making our songs “mesh” together with how good her vocals were, and the pop punk. You just kinda scream over the music, instead of singing.We eventually found a good balance.

I have to talk about the video for “Garden,” where you’re wearing these iconic denim dad-shorts. I applaud that choice. What’s your go-to article of clothing? Do you have a tried and true pair of combat boots or some trusty sneakers that have stuck with you through every show, every tour destination?

JOHNSON:  I am the definition of small shirt, big pants. I love mom shorts, dad shorts… all the jorts. I’m not sure where the choice came from, but I know there’s a lot of Avril Lavigne influence in it. It’s just like, what was poppin’… I love jorts. And vans and converse. I don’t really wear colors. And I’m just emo, so…

Speaking of emo, what’s the cringiest “recently played artist” on your Spotify?

I can respect that.

JUAREZ: One Direction. I grew up a Directioner.

This is so juicy!  I can’t shame you for enjoying it.

CAMPBELL: When I enjoy music, I can’t ever un-love it, ya know?

Can you tell me the story behind the album artwork for Changing States?

CAMPBELL: I did not expect to hear about Changing States. It was literally Ada, in her mom’s car.

JUAREZ: I had my friend take the picture. I remember seeing a super artsy photo on Tumblr with the same framing of this person with tattoos and they were driving down a road in a nice older car. I thought, wouldn’t that be a nice idea for an album cover? And we were like, yeah! It worked out.

JOHNSON: [Cringing] The songs aren’t bad, it’s just that the production is what makes me want to jump off a bridge.

JOHNSON: I really wanna record those songs again, eventually. That would be cool.

Has COVID-19 affected your lifestyles as musicians? Do you see it having any lasting impact on touring and live music in general?

CAMPBELL: We are very optimistic about the return of live music. Yeah, it sucks right now. But we know that when we go back, it will be worth the wait. Before COVID-19, we were playing for 20-30 people, but we have grown SO many times over… we have no idea what the size of our crowds are gonna be. It’s kinda fun not knowing.

JOHNSON: This time has actually been very helpful for us, since we’ve grown so much, and learned so much. And I know that when we  do our first show back, it’s going to be such an emotional day. We’ve grown so much, and we have no idea what it’s going to be like. We haven’t played a show in so long.It’s so crazy. Pop punk kinda needed this, the music industry needed this. Like, a wake up call to how beautiful live music is.

You were described as a “poster child for a new era of Pop Punk” in your most recent interview… is that a lot of pressure? Being that you’re a band comprised of all women of color, do you think people focus too much on your appearances rather than the music?

JOHNSON: I think it’s important that people know that we are women of color because it helps the ignorant people know that people of color come in all shapes, sizes, and… anything. I think eventually, yeah, we will get a little annoyed once it overshadows the fact that we are musicians first and foremost. But, it’s really important to have those things noticed since there’s no representation.

CAMPBELL: I don’t think it’s going to be that way for long because people don’t know us yet! So, that’s the first thing that comes to mind. We’re comfortable being in this role. We didn’t have ourselves to look up to growing up, so it feels good to be that for other people. When we’re a more well-known band, the music will just speak for itself. It’ll be an afterthought.

Lucky for you, Meet Me @ The Altar will perform a non-digital performance this year at Riot Fest 2021, September 17–19. Tickets are on sale now.