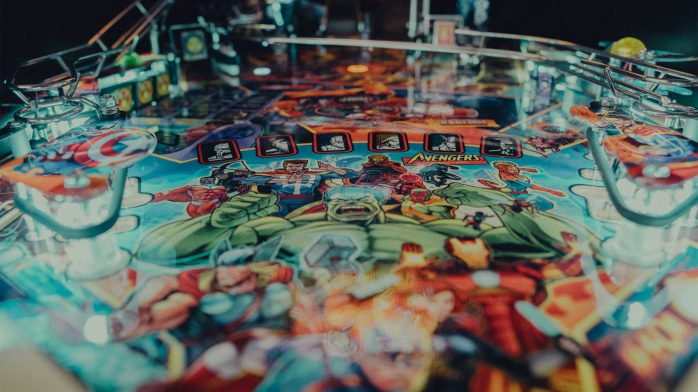 So That’s How a Pinball Machine is Made

I have no shame in admitting that I really only go to a bar if there’s live music, some goofy theme, or pinball. You’ll find tons of thriving barcades packed with the latter throughout Chicago, where multi-location establishments like Emporium and Replay frequently draw huge weekend crowds. The first bar I ever went to in the city was a barcade with dazzling selection of pinball machines, including my two personal favorites, Medieval Madness and Lord of the Rings, side-by-side. So it’s only fitting to learn that both of these games—and likely most pinball machines you’ve played—were designed and manufactured right here in Chicago, the pinball manufacturing capital of the world.

The largest pinball factory today is Stern Pinball, located just a few minutes west of O’Hare International. Stern’s designers are industry veterans: they’ve have built and shipped almost every big pinball release of the past twenty-ish years. Most of their design teams used to work at Williams Electronics, an iconic pinball manufacturer who designed hundreds of releases starting in the mid 1970s—including the best-selling pinball game ever, The Addams Family, as well as the aforementioned Medieval Madness, a game often ranked as the greatest pinball machine of all time. (I haven’t played nearly enough pinball to say the same, but it is pretty stellar.)

Williams’ pinball division shut down in 1999 to focus on the more profitable business of making slot machines, as the pinball genre faced a seemingly fatal decline. Once Sega sold their pinball division the same year to Gary Stern (whose father, Sam Stern, was the president of Williams), Stern Pinball became the sole manufacturer of new pinball machines for the next 13 years. Thanks to Stern’s efforts to revitalize pinball over the past two decades—alongside a flourishing collector’s market and a developing competitive scene—pinball is well and thriving in 2021.

Earlier this year, I got the chance to tour the Stern factory with my coworker Mo, who took the photos below for our first-ever Photo Journal. Aside from feeling like we got to peek inside Santa’s workshop, I walked away with a much greater appreciation for pinball machines, the work fueling their modern-day success, and the many talented people making them piece-by-piece. 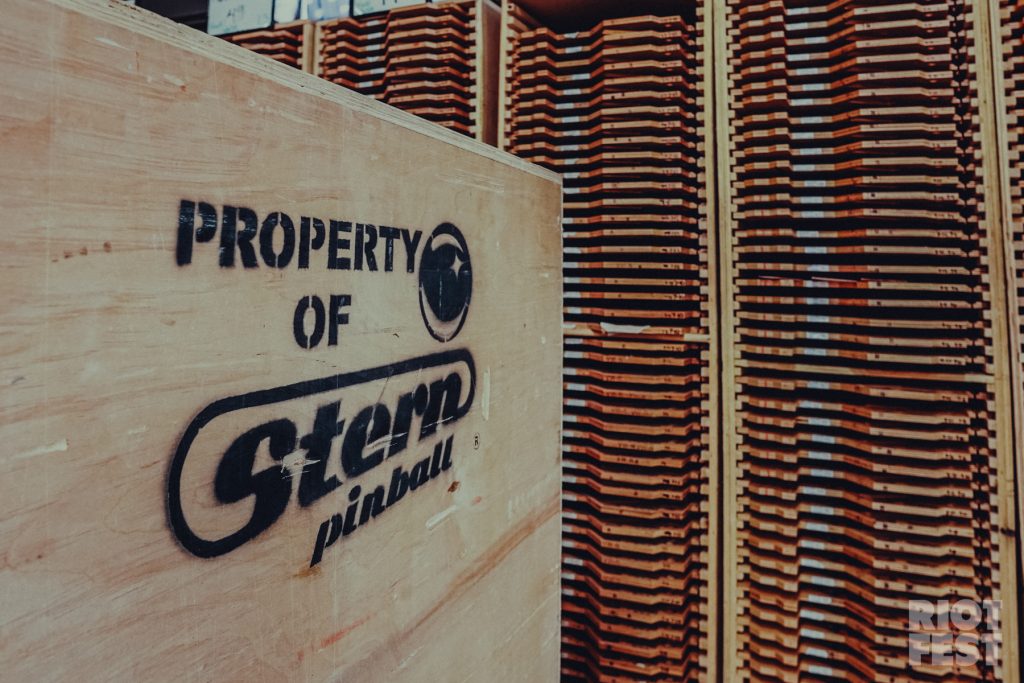 The first view of Stern’s massive factory, upon walking in, is a sight to behold. Their current space opened five years ago at about one million square feet of floor space. The ceiling is decorated with banners showcasing the many collaborations they’ve done across the years: AC/DC, Star Wars, Jurassic Park, The Munsters, plenty of superheroes, even a new Elvira machine. Our tour guide was Roper Fuentes, the Director of Location Entertainment (who was rocking a very punk Kirk Van Houten hoodie.) Fuentes worked for 7 years at Emporium Arcade Bar before joining the Stern crew; he credits barcades with saving the pinball industry, as well as Stern Pinball from bankruptcy. “Pinball took a steep decline at the dawn of console gaming,” Roper says, noting that the coin-free, play-all-you-want approach to pinball found at many barcades (not to mention the alcohol) has been huge towards the revived interest in pinball. 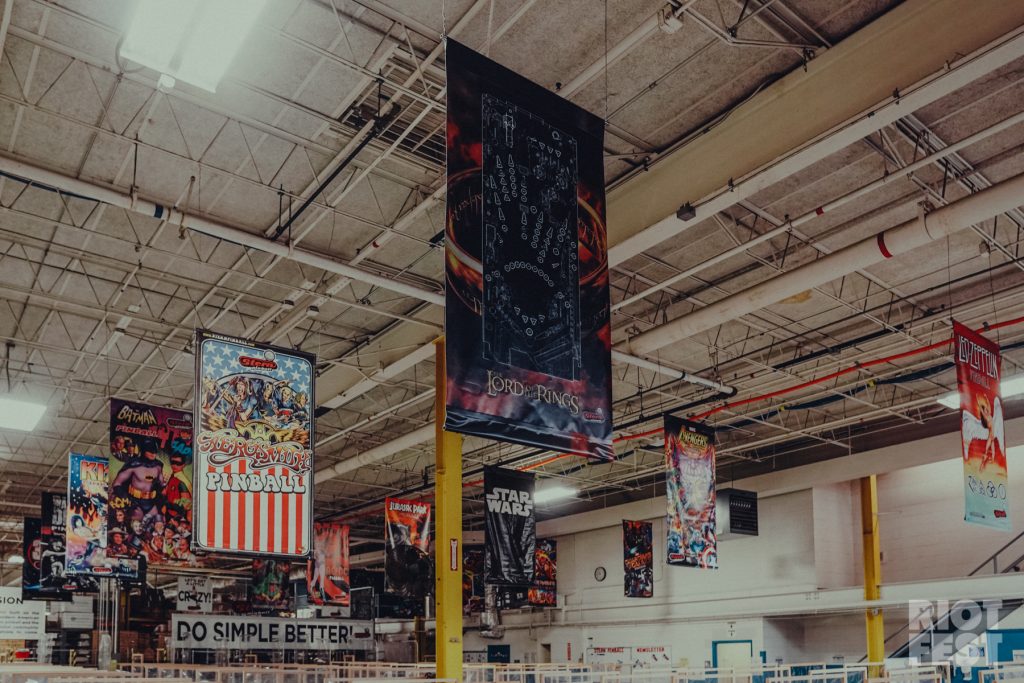 What caught my immediate attention, however, was the lack of machine-automated assembly lines. To my complete surprise, we learned very quickly that almost everything here is done by hand. Inserts are hand-assembled. Lights are manually screwed in. Even the flippers are made in house. There’s usually around 3000 parts in a pinball machine, and they’re mostly installed one board at a time. The meticulous quality control on display is especially impressive considering Stern keeps anywhere between 12 to 15 different machines in production at once. Boards in active production are hung on a tall metal grid, like a large gallery wall; older marquees decorate different parts of the facilities. 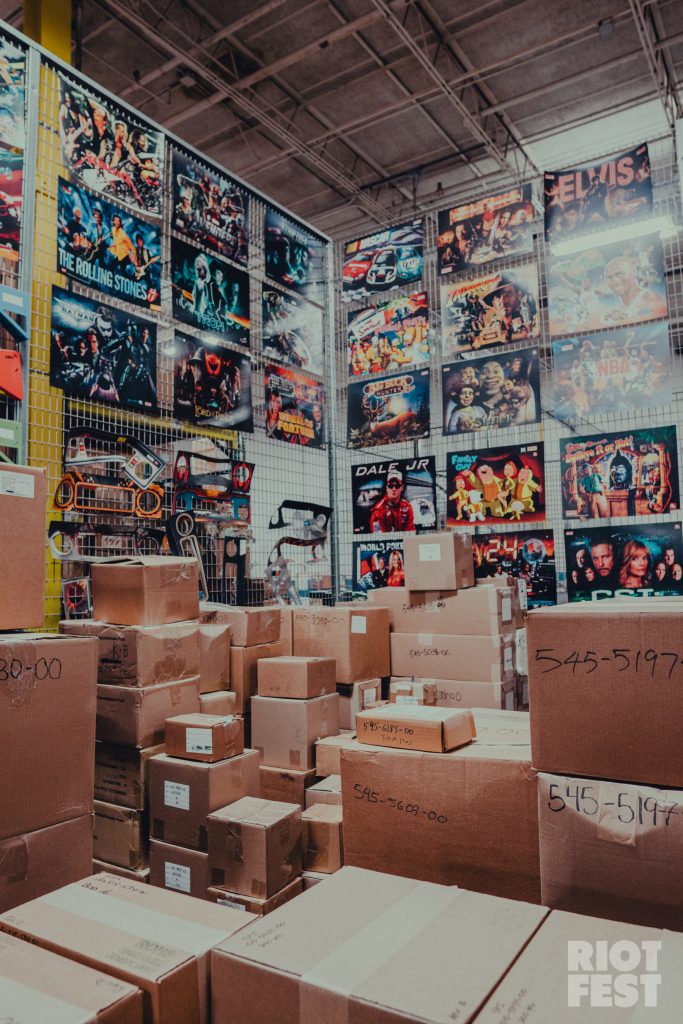 Each day, the Stern factory focuses production solely on one of their in-rotation units. Fuentes informed us that today’s assembly was for the Pro version of Led Zeppelin, their latest music collaboration. Stern’s artist-themed machines, according to Fuentes, are easily their best-selling units—classic bands who went decades without a proper pinball machine, like AC/DC, are big hits for an older market of collectors.

“Getting to make a Led Zeppelin game was a huge deal for us, a dream come true,” Fuentes says, referring to the Zeppelin estate’s traditionally tight grip on licensing the band’s image. Stern went all-out for the occasion and put legendary pinball designer Steve Ritchie on design duties, whose resumé includes iconic cabinets like 1979’s Flash, 1993’s Star Trek: The Next Generation, and newer Stern games like 2012’s AC/DC. The three separate editions of Led Zeppelin feature artwork centered around a different era of the band; the Pro edition being assembled in front of our eyes is plastered with the collaged images from the Led Zeppelin III cover. 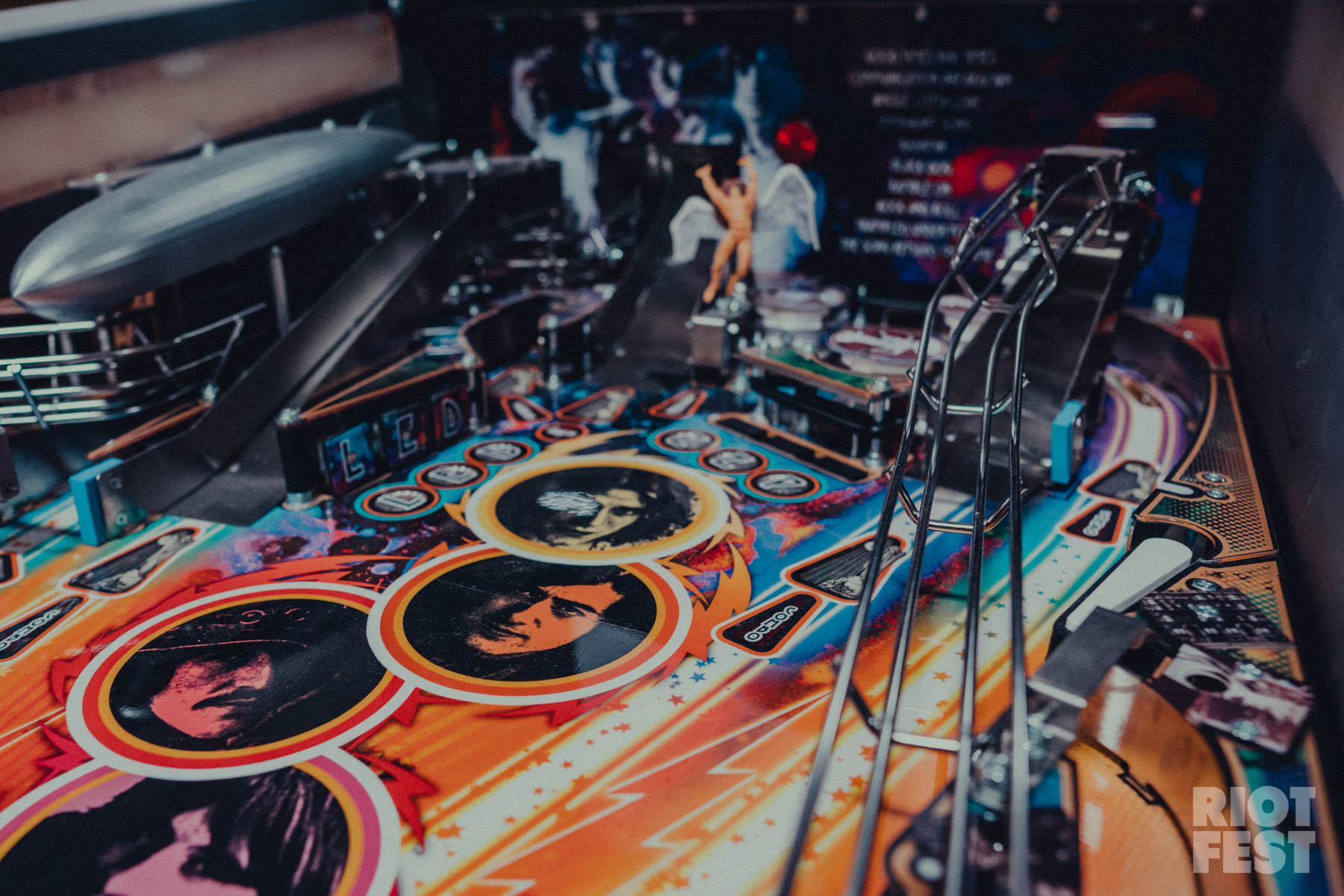 We watch a playfield board get pulled out from a rack, finished from the printing and laminating phase. The board itself is mesmerizing up close, bare without any bumpers or obstacles. Two men position it on a workbench near an unmissable piece of machinery on the factory floor, one that looks more like a tank engine than a piece of pinball equipment. It’s called a Hannifin four post press, as Fuentes describes, and it’s one of only two in the world. Originally purchased by Gottlieb in 1957 (another major pinball maker around that time), it’s been used on every Data East, Sega, and Stern playfield since 1986 to help mount hardware, ramps and posts by pressing holes on the underside of the playfield. 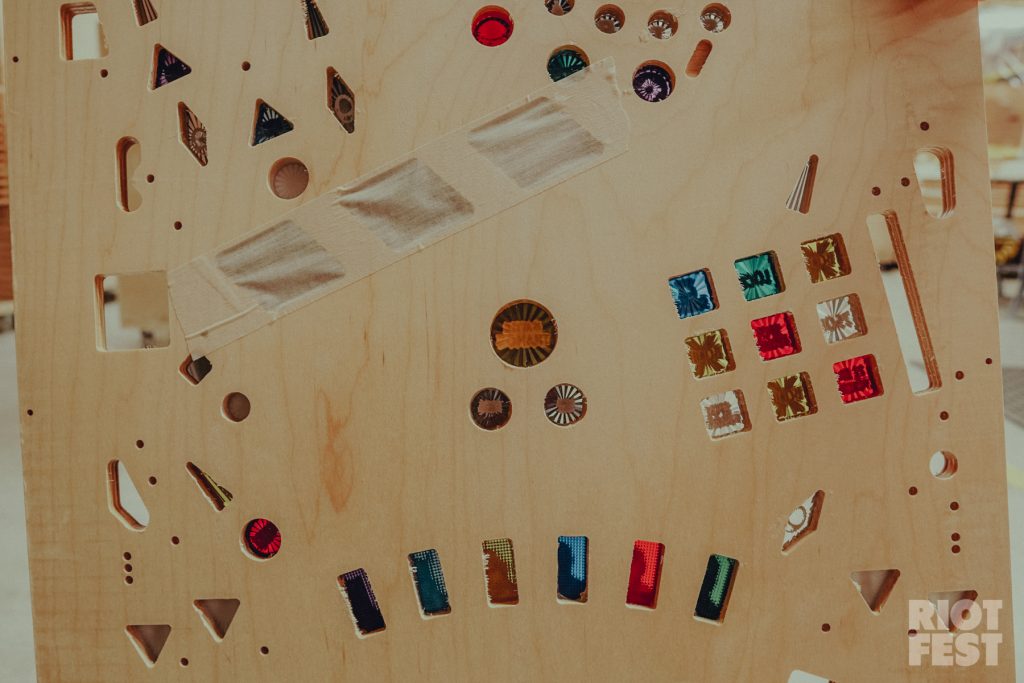 Practices like this haven’t changed throughout pinball’s history—but plenty else has. As we walk through the electronics section of the factory next, Fuentes points out a Star Trek board propped up with its innards—a giant web of carefully-organized wires—on full display. “This has nearly double the wiring of our newer machines,” he notes. “We’ve cut that amount down by almost half since it came out.” Watching the assembly of lights, wires and soundboards whiz by feels like seeing a marble statue get chiseled out in record time. Pinball manufacturing isn’t some dusty, old-fashioned process anymore, evidently. 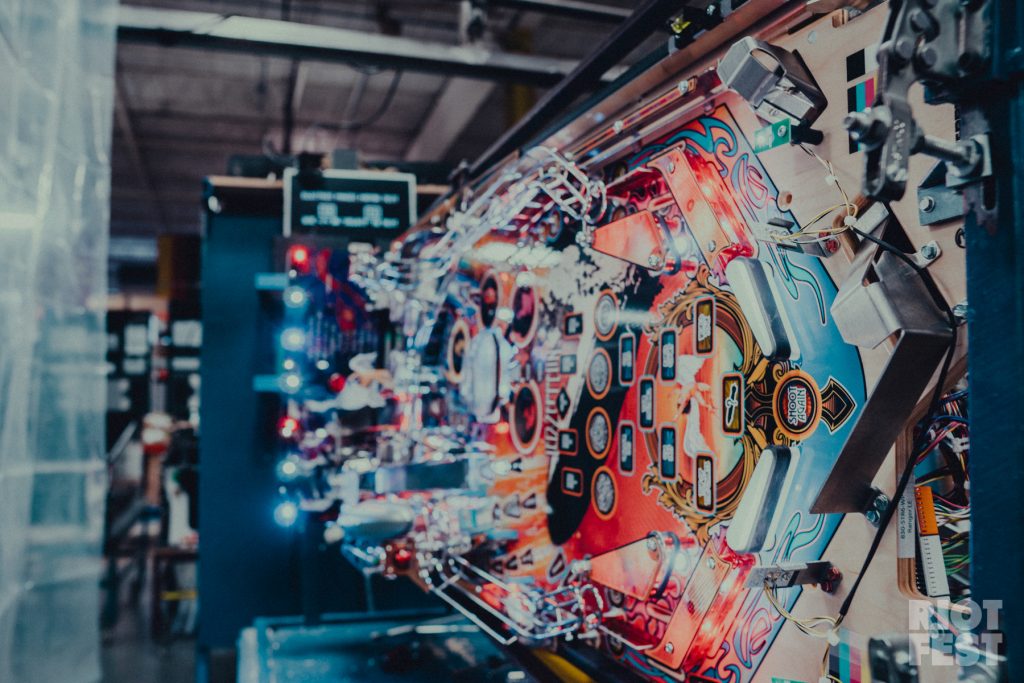 On top of that, Stern’s work is constantly improving to meet modern demands. Newer machines boast deluxe sound quality, scenes from licensed movies, and even concert footage. As we walk through a line of finished Zeppelin machines, Fuentes highlights one present-day problem: Twitch streamers playing pinball machines. Copyrighted music can’t be turned off on machines like AC/DC and Led Zeppelin, setting up a roadblock for Twitch streamers trying to show off a game. A younger, internet-savvy generation of pinball wizards is a huge win for Stern, and it’s a demographic they’ve worked long and hard to secure. But it’s a victory that comes with even more work ahead.

We reach Stern’s packaging and shipping center at the back of the building, where flags from various countries decorate support beams. Stern exports all over the world, straight from the same facility they conceive each and every release —some big buyers include Australia, Germany, and France. As we look across an army of Zeppelin cabinets, one gets lifted and folded very, very carefully into a tall box. It’s a sight to behold in itself. Fuentes asks us if we have any more questions while we watch, which I do. 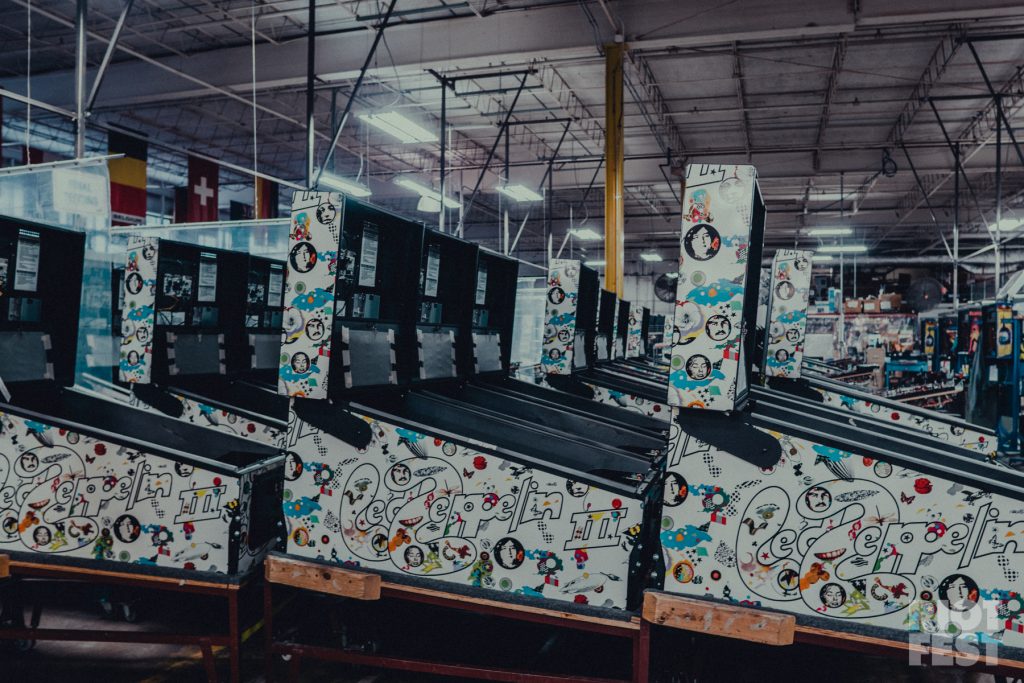 “What’s the most common requests you get for new pinball machines?” I ask. His answers, which I’m told are classified (since, hey, who knows!), are polar opposites.

But their most-requested games indicate pinball’s massive current-day appeal to both younger and older players. Sure, classic rock bands are bound to sell—but it’s the streamers, competitive pinballers, and Gen Z gamers that will rope in new customers in the future. And as Stern continues to expand, so will pop culture. Stern made a pinball machine for Stranger Things, a Netflix show, just a few years ago, something that wouldn’t have ever happened ten years ago. Now it feels like a perfect fit—and hopefully means other genres of music and media and will start to make their way onto Stern playfields. 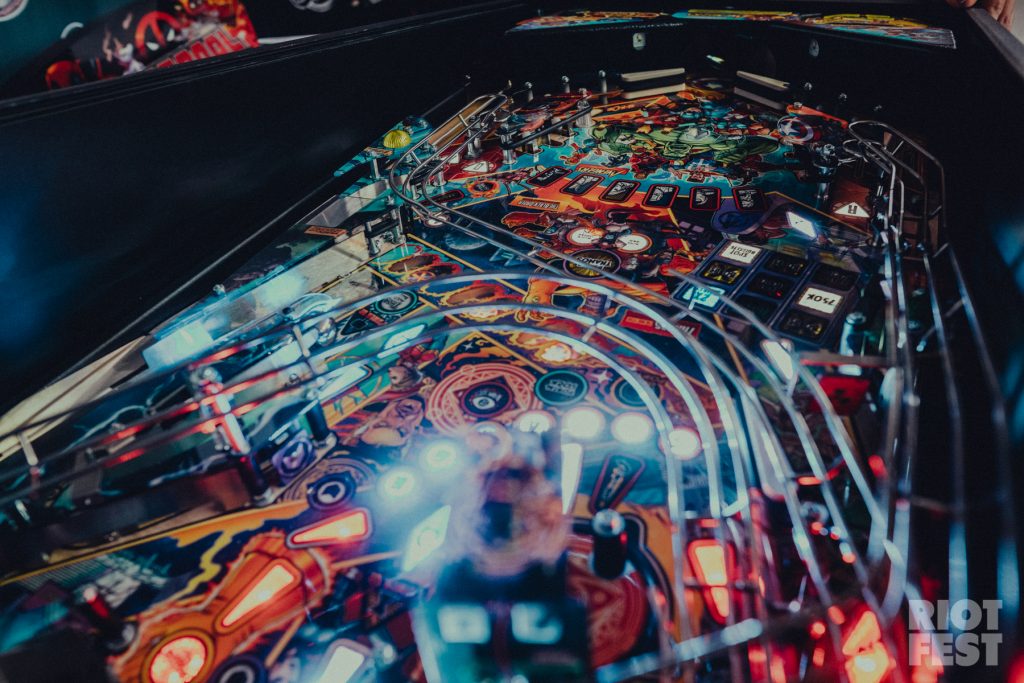