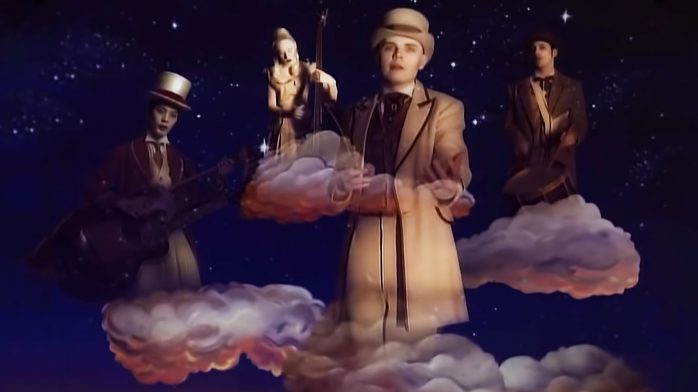 The Smashing Pumpkins came of age during the golden age of music videos, and like most of their alt-rock peers they represented a rebellion against the perceived vapidity of MTV-centric pop culture while also revolutionizing its aesthetics enough to keep it alive into the new millennium. In other words, they made a lot of extremely cool music videos.

As one of rock’s most cinematic bands, the Pumpkins wove influences and references from the entire history of movie-making into their videos. Film critic Laura Wynne picks breaks down 10 of them that defined their story.

The Smashing Pumpkins’ debut Gish’s production was extremely influential on grunge, but the Pumpkins were never grunge or even particularly indie.This was a band of Chicago kids that dressed like they wanted to be signed to Creation Records but couldn’t quite figure it out. This is a band of faces—both “Siva” and “Rhinoerous” lean heavily on tight closeups. They had taken acid (and named songs after it), they had put solos on everything. They probably watched the New Orleans graveyard scene from Easy Rider a million times to prepare. There was no going back.

“Today” is the first iconic Pumpkins video (directed by Stephane Sednaoui, most famous at this point for his work with the Red Hot Chilli Peppers), capturing the high-gloss aesthetic that set them apart from their alt-rock peers. James Iha pops up in a baby doll dress as an agent of chaotic androgynous freedom, with the rest of the video kind of a tribute to the orgy scene in Zabriskie Point. Basically all that happens is they paint a van and leave Billy stranded in the desert of the horned. For someone who was famously depressed, Billy Corgan smiled a lot in music videos, in live shows, in interviews, and when hanging out with clowns.

Mellon Collie and the Infinite Sadness was a concept record about ennui—coming to terms with how nothing feels right if you feel anything at all, aside from the most extreme of emotions. This is a fairy tale concept album, a special boy narrative rife with archaic imagery and choices, that’s also about present day relationships and feelings. (This is exactly what My Chemical Romance would take from them; their expressionist Black Parade videos were directed by Samuel Bayer, who helmed “Bullet.”) The shoegazers have turned into goth glam vampires, and they’re pissed. Again the band looks cool as fuck, wearing silver lamé pants in a mud pit, Corgan on a throne as boy king of Gen X, sticking his tongue out at the fact he’s getting away with any of this. This is what they saw themselves as (maybe ironically, maybe literally): a shiny bauble in an endless sea of dirty dudes.

“Zero” was directed by Corgan’s then-girlfriend, the photographer Yelena Yemchuck, and finds the band performing in a Victorian living room as a Renaissance depiction of a bacchanal. They make way too tight eye contact with the camera, wearing all black. Oh and Billy is shaved bald now, and will forever be different shades of Nosferatu as a personal style. The starkness is starting to creep in, as well as the obsession with antiquity mashed onto present day phrasing This is the headlong thrust into depression you sometimes have just let take you. To chase your worst impulses, and say “fuck it.”

Mellon Collie is in some ways a Lewis Carroll version of The Odyssey, but also it’s songs where Billy Corgan howls nursery rhymes like bomb threats. “Tonight Tonight” is the most beautiful and hopeful moment on the record. The video, where Jonathan Dayton and Valerie Faris take the Victorian imagery of the record and stage it as a Melies/Edison silent film tableaux, creating an iconic presentation of the band and their highly orchestrated chamber pop masterpiece as the music of an earlier version of art. Pretentious but not in the way the word usually used, but having an understanding of great art and placing themselves there, without asking permission. The optimism in the thought that the rules don’t apply to you because you’re in love? So romantic, dressed up like it’s 1902 and playing with a hundred violins beneath them.

Another creative polestar for The Smashing Pumpkins has always been Joy Division/New Order, the band covered Joy Division multiple times, after the band broke up Corgan toured as the guitar player for New Order’s excellent reunion record Get Ready. “1979” is a New Order-ish electronic guitar lovesong meant for full arenas to sing along to. The video is kids dicking around the suburbs, Corgan singing the backseat, the rest of the band popping up in bad wigs and mustaches  The post-Linklater/Araki presentation of boredom and antics, a song about hating how you’re stuck in your hometown.

“Ava Adore” is one of the Pumpkins’ most iconic videos, art-directed by John Beard, production designer for the film Brazil. Corgan wanted the band to be performing in a version of the most psychedelic and queer Fellini film, Satyricon, but that idea was shot down by the directors Dom+Nic in favor of the band speed ramping their way through multiple locations and groups of people. For the video, Corgan has gone full Count Orlock, slowly rising taller and taller in the frame as he peers out from behind red eyeshadow, lurching over a throbbing industrial dirge. He’s very sexy but he’s leaned into the image of a monster.

The first single from Machina is a guttural kiss off, Billy in 6-inch fetish boots and a vinyl tunic singing “You know I’m not dead” as the band shreds. D’Arcy is replaced by former Hole bassist Melissa Auf Der Maur, who looks the part. Here the Pumpkins looked like the coolest band of 2000. (The 00’s garage revival was nowhere near as stylish) The riff is indomitable. James Iha is throwing his guitar into the ceiling in a white leisure suit is a great summation for how everyone seems to be feeling.

Released in front of The Dark Knight in 2008, the teaser trailer for Zack Snyder’s adaptation of Watchmen featured an alternate mix of their theme song “The Beginning is the End is the Beginning,” a moody dirge for the apocalypse. The song sat idling for a decade on a single, the movie sat waiting to be seen as a weird, minor-key attempt at art cinema (long before the HBO show). Like many great trailers, it’s better than the movie, completely gorgeous images free of context. When the trailer dropped Corgan asked his label if it was possible to release the trailer to music video networks.

“Silvery Sometimes (Ghosts)” is the last visual statement of the band to date. The best Pumpkins single since “Untitled,” an equally back-to-basics alt-pop song that focuses on a noodly, lush guitar sound. The video is perplexing, with Sugar Ray frontman and Entertainment Tonight host Mark McGrath playing a scripted character. Inexplicably it finds the band in a “stay overnight in a haunted house” challenge, making them a kind of midpoint between Bob Hope and the Scooby gang. They are comfortable with their role as elder statesmen and okay with being in on the joke, with Corgan (who directed the video!) in a huckster role.

The Smashing Pumpkins have existed for 32 years. The quixotic nature of the band is now its biggest virtue—who else is still trying to slay that dragon? They have made their creative pursuit their whole lives. The most dramatic, complicated story they could tell ended up being their own.