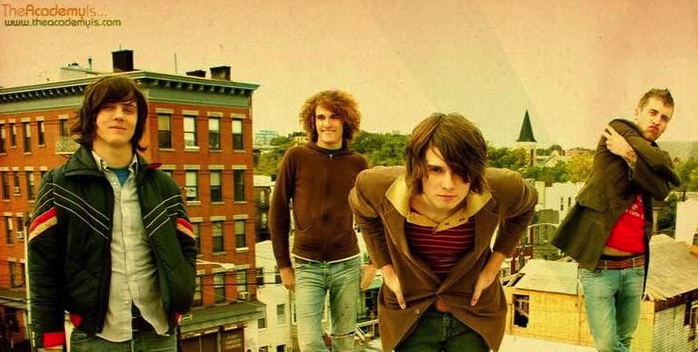 Attention, Attention, The Academy Is… to Reunite at Chicago Riot Fest

“You’ve won the role, you’ve played your part, you’ve been cordially invited.” You’ll be impressed. And you’ll definitely be excited.

On Saturday, September 12th, 2015, frontman, William Beckett, who Alex Davies of BBC accurately called “Part Adam Lazarra, part Prince”, will join his bandmates in The Academy Is… for a one-off Riot Fest performance in the band’s hometown of Chicago.

Anyone who has ever rocked a studded belt, had a livejournal account, or indulged in the “so called music scene”, will likely remember The Academy Is…’ 2005 debut release, Almost Here. William Beckett’s alluring lyrics, savvy delivery, and instrumental hooks set this album apart from other pop punk albums that marked the early 2000s. The entirety of Almost Here feels like it was sung in one thirty-three-minute-long breath, each song dissolving into the next with more flavor and fusion than an Asian bistro.

In honor of the record’s 10th anniversary, The Academy Is… will perform Almost Here from start to finish at this year’s Riot Fest & Carnival.

As day turns to night and The Academy Is… takes the stage, we will hear classics like “Classifieds”, a song whose chorus “Back down, cash out, that’s the city for you” has been stuck in my head since my senior prom. The song advertises William Beckett to his fans, the way a local paper might advertise an eligible suitor to all of the single ladies in the tri-state area. “He writes good storylines, he’s got those honest eyes. So take him home for just $9.95. He’ll sing the songs you like, he’ll keep you warm at night”. This song is self aware and silly, and compliments tracks like “Slow Down” and “Black Mamba”, which delve into deeper topics about Beckett’s opinions on the music industry at large.

According to a May 27th update on The Academy Is… Facebook page, this performance will serve as both a reunion and (potential) farewell show for the newly reformed band:

We are pleased to announce that we will be reuniting the band for a our first show in many years. In September, we will come together for Chicago’s RIOT FEST in Douglas Park to perform our beloved debut album “Almost Here” in its entirety. This is a 10 Year Anniversary Show! This is a Reunion Show! This is a Farewell Show! We are extremely excited to take a trip down memory lane – in the city that we call home.

Xo. The Academy Is…”

*Since posting this message, The Academy Is… has added a second date on September 10th at the Double Door in Chicago’s famous Wicker Park.

In addition to Almost Here, The Academy Is… will likely perform tracks off of their subsequent LPs, Santi (2007) and Fast Times at Barrington High (2008), both of which reached the Top 10 on Billboard’s Rock Album chart. The current Academy Is… line up consists of lead vocalist, William Beckett, bassist Adam Siska, guitarist Mike Carden, and drummer Andy “The Butcher” Mrotek.

3 Fun Facts You Might Not Know About The Academy Is…

1. In the mid-2000s, Pete Wentz of Fall Out Boy used his celebrity status to help bands like Panic! at the Disco, Gym Class Heroes, and The Academy Is… gain popularity. To return the favor, William Beckett has regularly appeared in in Fall Out Boy’s music videos, often dressed as a vampire.

2. The Academy Is… song “Black Mamba” was featured on The Snakes on a Plane soundtrack. If you forgot how amazing this soundtrack is, then let me remind you.

3. The Academy Is… had a video podcast called TAITV that aired for three seasons and gave viewers an inside look into the band’s life, or you know —someone’s version of it. Since it’s too weird to really talk about, you can watch it for yourself here.

What to Expect at the Show: A mesmerizing William Beckett, singing over bouncy guitar riffs and the squeals of adoring fans.

What We Wish Would Happen at the Show: A full-on fashion competition between William Beckett and Gwen Stefani.

For Fans Of: Panic! At the Disco, Fall Out Boy, deep dish pizza, and love at first sight.