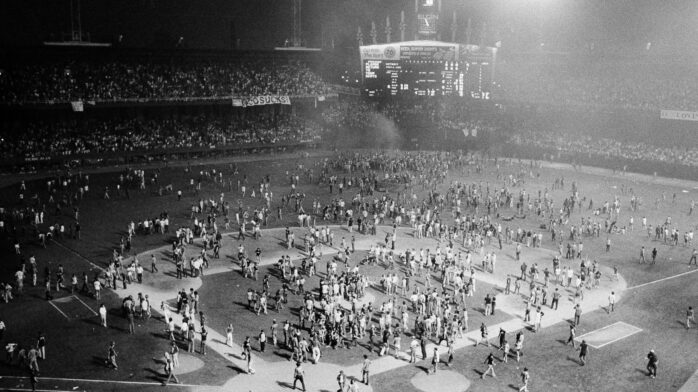 Disco Demolition: The Death of Disco

At the end of the 1970s, disco was seeing a formidable backlash and disdain from hard rock fans across the nation. Therefore, in an attempt to capitalize on this increasing resentment—and to fill seats during a disappointing Chicago White Sox season—Mike Veeck, White Sox Promotions Director and local Chicago DJ, Steve Dahl, proposed an anti-disco promotion.

What initially seemed like a harmless ploy to tap into some South Side fieriness—and sell a few extra tickets—became baseball and music lore.  It was on this day—July 12, 1979—that many credit as the day disco died. And it all happened at Chicago’s Comiskey Park during a doubleheader between the Chicago white Sox and Detroit Tigers.

The premise was simple: fans would pay 98-cents for a ticket and bring their hated disco albums for Steve Dahl to blow up on the field.

Although organizers were expecting attendance to hit around 20,000, over 50,000 packed the stadium.  Even as officials closed off the main gates, disco-hating Chicagoans still managed to jump fences, slip through security and find their way inside Comiskey.

It all lead up to 8:40 p.m. That’s when army fatigue-wearing Steve Dahl took his outfield position to blow up a giant box of crappy disco records. As bottles, records, lighters and more rained down from the crowd, the disco record explosion ripped sizeable hole in grass as thousands of fans stormed the field, lit a bonfire, stole the bases, destroyed the batting cage, and probably picked a few great places to smoke some weed.

In the end, the field was destroyed, 39 people were arrested, and the second game of the doubleheader was forfeited.