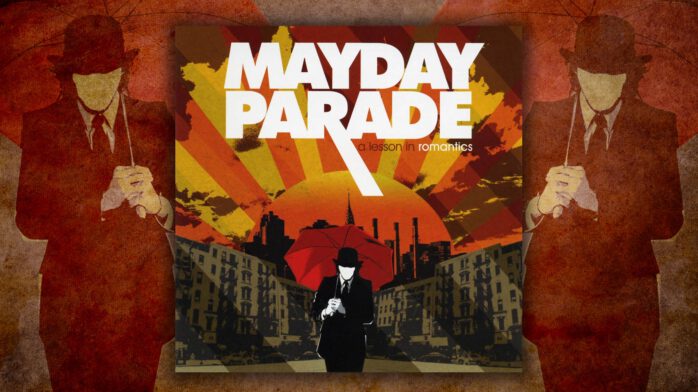 For Mayday Parade guitarist Alex Garcia, his band’s 2007 debut full-length album A Lesson In Romantics is essentially a time capsule. “I was definitely younger when we wrote [the record], so there are some things I would shy away from,” he says. “Some of my parts are a bit immature to me now. I don’t mind that though, because that’s where I was. That’s where we all were when we wrote the record.”

When the five-piece band from Tallahassee, FL wrote and recorded A Lesson In Romantics, they were technically still a six-piece. Former vocalist and guitarist Jason Lancaster’s untimely departure from Mayday Parade right before the record’s release has been well documented, but his sonic fingerprint is an undeniable aspect of it’s success (Lancaster and lead singer Derek Sanders virtually split vocal duty 50/50 on the album).

“We would hash the songs out together in a room, all six of us because Jason was in the band at that point,” Garcia says. “We would throw out suggestions and ideas. Everyday at band practice we would work together through ideas.” That collaboration was essential in creating a record that proved to be a cornerstone for emo pop-rock and the Warped Tour-centric community in the late 2000s.

Where most bands would have folded from such a substantial loss, Mayday quickly got to work learning how to play the songs live without Lancaster. “There’s a lot to be said about that,” Garcia says. “We performed maybe five songs from A Lesson In Romantics live while Jason was in the band. When he left the band, we were on tour so we had to learn his parts. We’ve played pretty much every song off the album since Jason left.” Even in the music videos for singles such as “Jamie All Over” and “Miserable At Best,” bassist Jeremy Lenzo and drummer Jake Bundrick are seen taking over Lancaster’s vocal parts, mostly due to the fact that they had begun to sing those parts live.

Looking back, Garcia does not deny the context in which their seminal album was created. However, that period of readjustment is truthfully a distant memory at this point. “Re-learning the songs, that history is hard to ignore and forget,” he says. “It’s an aspect of the band. At this point, he’s been gone for so long that it’s nothing difficult for us to overcome.”

There is something to be said about hitting a homerun on your first trip to the plate. Most bands have very limited money and studio time to track their debut LP, and the case was no different for Mayday Parade. “People always love the first album from a band,” Garcia says. “The story is so old. It’s the album that they had the least amount of money and time to record. But there is the argument that they had a lot of time to write it.”

A Lesson In Romantics was released on July 10, 2007 via Fearless Records. It is still the band’s most commercially successful release to date with over 200,000 copies sold. Although Garcia still cringes at some of the more “immature” qualities on the record, he definitely does not shy away from his love of the songs.

“It’s probably my third favorite record,” he laughs. “I love the record, obviously. I think it’s held up and going back through all the songs, I think they’re all great. It’s hard to disassociate the experience of recording an album from your feelings about it. I think about specific things when I hear that record. I think about the making of it, and what went into that. I associate specific feelings with the record. It’s hard to step away from that. When I try to step back objectively, I think it’s a great album.”

Embracing the past but growing from it and expanding on it is something Mayday Parade has truly taken to heart. In the past year, they’ve released new music videos for “The Problem With The Big Picture Is That It’s Hard To See” and “Black Cat,” the latter appearing on A Lesson In Romantics. Couple that with the “Anniversary Edition” re-release of the album and worldwide touring in support of its 10-year anniversary—not to mention an album play at Riot Fest this year—and you can see that the band clearly does not shy away from its most beloved record.

The question still remains: Why is embracing the past important for Mayday Parade? Garcia expounds, “I think it’s important because it was our biggest album,” says Garcia. “It has a revitalization affect. It helped revitalize the image of the band.”

Instead of running from the looming shadow that A Lesson In Romantics casts, Mayday Parade is inviting fans both young and old to come dance in the refuge of commonality and nostalgia. It’s both a celebration of the past and strong step forward for the new generation of Mayday fans. “There are certainly more fans now than when it came out,” says Garcia. “Seeing new, young fans who love and embrace the record is something we’ve talked about amongst ourselves. It’s exciting to see fans discover the album for the first time.”

Mayday Parade is performing A Lesson In Romantics in its entirety on the Radicals Stage at Riot Fest on Friday, September 15th from 7:00-8:00pm.