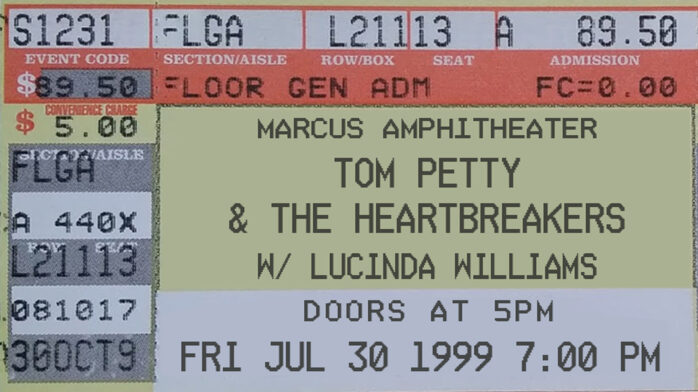 I Got Lucky, Babe, When Tom Petty Found Me

We are all too shocked and saddened at the sudden passing of our musical hero to write about it, so we’ve asked Archie Powell—frontman for Chicago rock band Archie Powell & The Exports and one of the biggest Petty fans out there—to eulogize Tom Petty for us.

My uncle Gordy took me to see Tom Petty for the first time when I was twelve years old at the Marcus Amphitheater in Milwaukee. If ever it were possible to triangulate a single date that set a course for what kind of person I would become, then Friday, July 30th, 1999 would be my closest guess. I turned a corner, I was given the tools, I learned a lot.

Here’s Tom: a shock of straw hair, teeth like a horse, a voice no one asked for and, just for good measure, he’s wearing a fucking top hat like it’s the most normal thing in the world. He’s got these five guys who are not at all embarrassed to be seen with him, and they’re providing a musical platform for every word he has to say. The kicker? Everyone around me, be it the ten year old to my left or Great Aunt Marge behind me, seems to know every single one of these words for two and a half hours. He’s a goon. They love him for it. I was not aware that this was an option, and took it as a prompt to quit the basketball team later that week. Be strange, form a band, make noise. That fit a lot better. I left that concert feeling like my heart pumped helium and supposed that this was why old people enjoyed going to church.

Here’s why the Tom Petty Experiment has such wide appeal; it’s available to whatever depth of involvement you’re willing to commit. Want a delicious melody on in the background? Turn your brain off, Tom won’t spread you thin. Want to look the cruel void square in the eye and plumb the depths of our human psyche? Tom’s a treasure chest of musings, tales and profound observation of the lives we all lead and the shit we all have to shovel. He’s Mark Twain, he’s Tennessee Williams, he’s Sylvia fucking Plath. Put him on in the dentist’s waiting room or write your dissertation on him, whatever feels good. Tom’s up for what you’re into.

Approaching the catalogue from a cerebral vantage point yields endless delights. The content is bold, darkly romantic and downright sassy with universal application. “Good love is hard to find / you got lucky, babe, when I found you” is an epithet I’ve invoked during a wedding speech as well as a traumatic breakup, and somehow it sticks to both. How a mere mortal can achieve this with such economy of language remains baffling to me, and I’ll likely be trying to imitate it for the rest of my life.

Conversely, there’s the visceral appeal—these songs are inextricably linked to sense and memory for so many of us. “King’s Highway” comes on, I’m a child in Florida trying to catch lizards on the rocks outside a motel. “I Need to Know,” I’m in Missouri at a bar with a quarter beer special trying to get served as a minor. “Time to Move On,” I’m throttled by the moment I get the news that this beautiful individual has shuffled off our mortal coil. And every time I smell pot smoke? Shit, man. That’s Petty.

I’ve lost count of how many times I’ve had the privilege of attending the Church of Tom. Ever since that first show, I’ve rarely missed a tour. Ever since, I brace myself not to cry on the downbeat of the first song (it never works). And ever since, if I’m feeling beat up by this horror show we’re meant to endure on the daily, I know that I can play “Even the Losers” at jet engine volume and feel emotionally invincible for three minutes and 59 seconds. I spend an incredible amount of time and energy trying to write my own songs in the hopes that maybe they’ll be good enough to make someone feel half as amazing as Tom’s have made me feel for the last 18 years.

My final experience seeing him perform was a fitting bookend—Thursday, July 6th, 2017, at the same exact venue in the exact same seats as my first. This, the band’s 40th(!) anniversary tour, felt triumphant and surreal. Tom, a beacon of grace and gratitude, a man who always had a knack for melting away any cynicism or ire that I snuck in through security. The band were incendiary. The setlist was at once surprising and familiar, which is probably also the single greatest strength of Tom’s writing. We left with full hearts, grateful that we’d caught this show, lightly joking that you never know how long folks like this can keep up the act. I’m sad to learn how true that was.

On the phone with Uncle Gordy yesterday, I thanked him for taking me to that first concert and for the lifetime of memories it unfurled for me. Had he not let me take that ticket, I could very well have not been compelled to embrace the quirks about myself that, while they may get you hit with flying rubber bands in middle school, will ultimately be what is loved and celebrated about you. I could have never dug into songwriting or performance. I could have taken a job at the bank, man. Not that there’s anything wrong with that, but I don’t think Tom ever had a desk job and he’s the one who programmed my brain.

In my more morbid moments I’ve wondered how I’d handle this, what a friend of mine described as “our first day on Earth without Tom Petty.” I figured I would pull a Howard Hughes and lock my door, pull the blinds, piss in a jar. It’s not happening like that. The grief is substantial, but mostly I feel fortunate that these tunes exist. They’re extremely powerful weapons against the darkness. Given the way our world seems to be disintegrating into a carnival of death more and more each day, I think the music will prove more useful than ever.

Goodbye, Tom. I owe you all of it.

Check out Archie Powell & The Exports’ cover of Tom Petty & The Heartbreakers’ burner “I Need To Know,” originally found the 1978 album You’re Gonna Get It!: