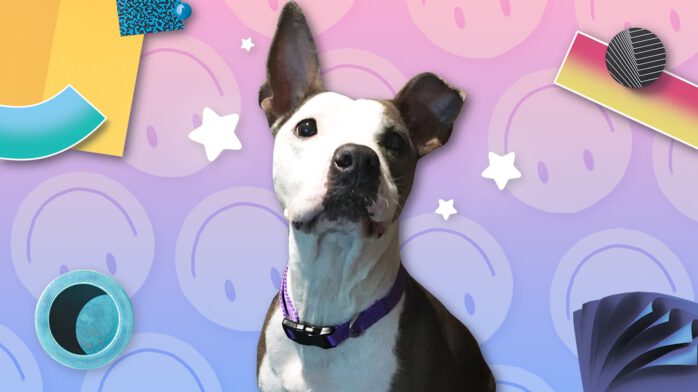 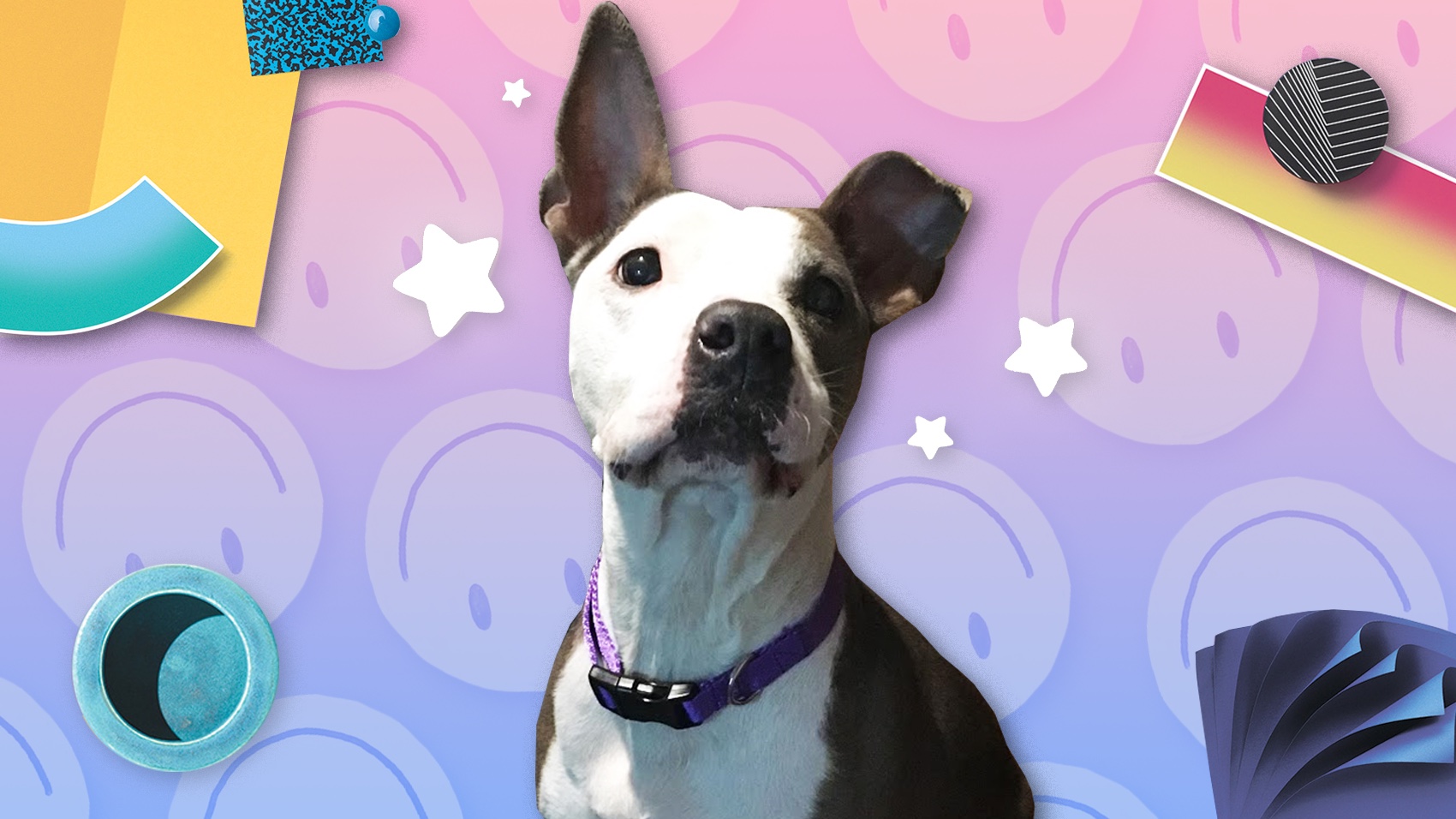 All We Know is that during Riot Fest week last September, we really put Pressure on Hayley Williams, human singer of rock band Paramore, to help us help the Friends of Chicago Animal Care and Control (or FCACC) bring a Brighter life to Hayley Williams, a cute and cuddly canine, via a foster or forever home. “Here We Go Again,” our readers quipped. “Riot Fest and these adorable puppies, they’ll just ‘Never Let This Go,’ will they?” Whoa, dude, not cool! What, is this some sort of Conspiracy against us? Quite Franklin, My Heart breaks for those who don’t sympathize with the plight of the rescue dog, but I digress…

At first, we didn’t think Hayley Williams: The Dog would get much attention from potential foster parents. However, For a Pessimist, I’m Pretty Optimistic, and have discovered that the more positive you are, things just go better for everybody. That’s What You Get with the power of positive thinking, I always say (sometimes). So I put on the song “Hallelujah” (Jeff Buckley’s version), followed by Soul Asylum’s “Misery,” Business was put on the back burner (which only usually happens When It Rains), and I was like “Let the Flames Begin!”

My colleagues didn’t understand why I was talking about flames when trying to save a dog, but when you’re dealing with a Miracle, no explanation is really needed, nor possible, really. “We have to save this dog,” I thought to myself. Not only had I developed a CrushCrushCrush on her (which is three times bigger than your standard crush), but I thought to myself “If we, as a society, don’t save this dog, We Are Broken.” We’d need to mend all sorts of Fences, I wasn’t quite Born For This, or so I thought.

Careful what you wish for. If you carry Ignorance with you, and start Playing God, you’ll eventually find the to rebuild your life and relationships Brick by Boring Brick. Seriously… it’s very boring, and it’s really hard to Turn It Off. The Only Exception is if you’re Feeling Sorry for a dog that’s Looking Up at you with those eyes (Unlike my eyes, the sides of which is Where the Lines Overlap, while Misguided Ghosts dance through my head.) All I Wanted was to help this adorable dog named Hayley Williams.

So I drove Fast In My Car to the office, and was like “I need to save this dog… Now! If I don’t, will I ever Grow Up? If I’m only thinking that I will, I’m just Daydreaming.” Anyway, Moving On… the playlist had moved on to the Dead Boys at this point, and to the faint strains of “Ain’t It Fun,” I arrived at work.

It truly seemed like we were this poor little dog’s last hope. I needed to go visit her at CACC to let her know, “I’m Still Into You.” I then zipped over to the shelter, dodging all the little Anklebiters on the way in (seriously, I almost tripped over like three Chihuahuas), stared into poor Hayley’s eyes, and left to go back to the office with purpose. I blasted Weezer’s debut album into my car’s 6-disc changer on the way back, and truly felt like I was on my way to save the world… or at least Hayley Williams: The Dog.

It took a while to get back to work, and the Blue Album was already at “Holiday” by the time I pulled up to the office. I tweeted about Hayley Williams: The Dog with the intention of getting Hayley Williams: The Human’s attention. Why? Because if you don’t ask, the answer’s always “no,” and if you don’t try, you’ll never ever know. Guess what? It worked! Want Proof? Here:

for the love of dog someone adopt me https://t.co/yBalOqANZw

I’d told Hayley Williams: The Dog before leaving her, “I would really Hate To See Your Heart Break like One Of Those Crazy Girls. I’m Not Angry Anymore and I Don’t Want You To Be Alone in the Future. I know you’ve had some Hard Times, but your glasses should be Rose-Colored.”

Boy, did I have the last laugh. Since Hayley Williams: The Human tweeted about Hayley Williams: The Dog, she was been welcomed into a foster home. While I wanted to rub it into my naysaying coworkers with a hearty “I Told You So,” I felt it more mature and proper to just show them love and Forgiveness. That way, I needn’t be Fake Happy like some 26 year old millennial who hasn’t learned about self-respect yet.

So, this story indeed has a happy ending. While Hayley Williams: The Dog was secretly hoping to go to a foster home with an in-ground Pool, she’s OK with the hand she was dealt, and is not holding any Grudges. That’s a good thing, too, because I’d probably be Caught In The Middle of a situation like that, and when it comes to matchmaking results, I’d rather stay Idle.

“Worship me, for I am your god,” Hayley Williams: The Dog seemed to say with her eyes after landing at her new foster home. “NO… Friend,” was his new masters’ response, as they introduced the confused beast to her new canine sibling.

hey @yelyahwilliams, remember hayley williams the doggo that @RiotFest introduced the world to? well, she’s got a sweet foster home (soon to be adoptive!) with us now and she’s no longer having hard times 😏💓 pic.twitter.com/evOOnlzdJT

If you can tell a story more heartwarming than this one, please… Tell Me How.

Every week, Riot Fest helps share Chicago’s dogs in need with the world.

Hayley Williams: The Stray Dog arrived at an overpopulated Chicago Animal Care and Control the week before Riot Fest 2017. She was then named by a volunteer and retweeted by Hayley Williams: The Human the day before the festival started, which helped lead our pooped protagonist to the foster (and maybe forever) home of Molly Kuzel, a kind and selfless Riot Fest regular. This saved Hayley Williams: The Foster Dog from euthanasia.

Our city’s dog shelter is always packed with critters in need, and more foster/adoptive homes are always welcome. Please email Chicago Animal Care and Control at [email protected] to you want to learn more about fostering and/or adopting a rescue dog.

The Friends of Chicago Animal Care and Control can be found at http://www.fcacc.org.