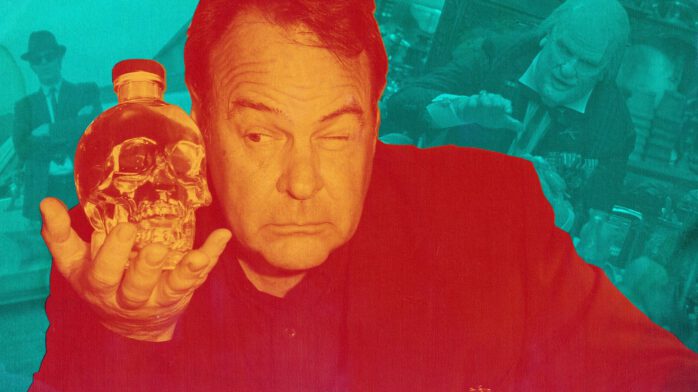 A look at the weirder side of Dan Aykroyd

I love Bill Murray as much as anyone—I’m a snob, yes, but I’m not a monster—but I think it’s time we as a culture give the mass adulation a rest for awhile. A couple other people from the original Saturday Night Live orbit were pretty great, too, and I don’t see any Etsy t-shirt shops and half-assed memes dedicated to them.

To wit: where’s the cult-like worship for Dan Aykroyd? Yeah, he doesn’t have those sad, soulful eyes that Murray exploits so well in his dramatic roles, but y’know, he was a Blues Brother, and he did kind of invent Ghostbusters. Is that not worth anything to you people?

Then again, maybe Aykroyd hasn’t yielded a cult because so many of his roles have been weird as hell. Both Aykroyd and Murray have made plenty of questionable career choices, of course, but there’s one big difference: where Murray always seems to go into his lesser roles with a knowing wink, a non-committal grace, Aykroyd goes all in whether the material deserves it or not. To these eyes and ears, this makes even the least of the Aykroyd canon compulsively watchable.

Doctor Detroit, which is being issued on Blu-ray this month, is a prime example of subprime, but fascinating Aykroyd: a bawdy comedy about a straightlaced junior professor who somehow gets convinced to pose as a pimp—which inexplicably involves him dressing like a supervillain/mad scientist, complete with metal hand… wait, what?—and go up against a Chicago crime boss called Mom, all to help out some friendly prostitutes (including The Nanny herself, Fran Drescher!) he just met the week before.

Though it was released at the height of Aykroydmania, right between Blues Brothers and Ghostbusters, and featured dual theme songs from both Devo and James Brown, this wasn’t enough to prevent it from being a bomb, even if the latter fact has helped build the film’s cult following over time.

Doctor Detroitis far from a great movie, but it is weird, and in that regard it’s far from alone in the Dan Aykroyd oeuvre. Below are some examples not necessarily of our man at his best, but at his strangest; I can’t promise you’ll laugh at all these clips, but I promise you’ll wrinkle up your nose and say “what the hell?!”.

Nobody loves a song and dance number more than Dan Aykroyd. Besides the obvious example of Blues Brothers and the Doctor Detroit scene above, there’s this scene from Nothing But Trouble, a grotesque Tim Burton-esque caper that also happens to be Aykroyd’s sole credit as a feature film director (of course).

Most of the movie involves Chevy Chase and Demi Moore as yuppies trying to escape a cartoonish haunted courthouse/funhouse, where they’re being kept by desiccated small-town judge Alvin Valkenheiser (Aykroyd himself, covered in makeup and a prosthetic nose that looks suspiciously like a wienes) for running a stop sign and trying to evade the cops.

Somewhere in the film’s feverish, bizarre storyline, though, hip-hop legends Digital Underground show up and have to convince Valkenheiser that they’re actually a band in order to get out of a traffic violation of their own (of course), which yields this performance of the lesser-known hit, “Same Song.”

If that setup sounds inscrutable, well, check out the payoff. This scene is also notable for being the film debut of the late (or is he?) Tupac Shakur.

Mike O’Donoghue, perhaps the most twisted and caustic writer attached to National Lampoon and the original SNL, put together this feature-length parody of 60s shockumentary Mondo Cane, and while it’s definitely a relic of its era, it’s also a pretty incredible collage film: funny, tasteless, and punk as fuck (Sid Vicious is even in it; he’s supposed to be singing “My Way,” but Paul Anka wouldn’t let it air, so they just took out the sound and had Sid shooting into the audience in complete silence).

Aykroyd appears in two pieces here, as a preacher for the Church of Jack Lord, and playing himself in the above bit.

Hot off the first season on Saturday Night Live, Lorne Michaels served as executive producer on this TV movie about the Beach Boys’ return to the stage with Brian Wilson. Since Michaels was involved, it was only natural that a couple of the Not Ready for Prime Time Players would show up for a comedy sketch or two.

It was already known that despite Brian Wilson’s propensity for writing songs about surfing, he didn’t actually surf himself. Between that and the heavily medicated semi-hermitage state Wilson was in at the time of filming, this scene would be almost cruel… were it not done with such good-natured reverence for its iconic subject.

It’s not particularly strange for a celebrity to get involved in the high-end liquor game (just ask Sammy Hagar). Since we’re talking about Dan Aykroyd, our fine vodka comes with a side of some off-the-wall shit about paranormal activity. This whole extended commercial almost seems like a put-on, especially when he turns his spiel over to a rep from the Newfoundland Liquor Corporation to explain their… um, unique filtration process, but if it is, Aykroyd is keeping an even straighter face than usual.