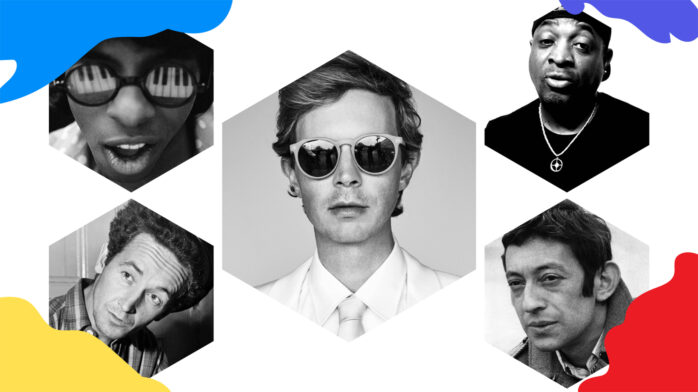 Crank this playlist, and read on. You just may learn something.

In the beginning, people struggled to even describe what Beck’s music sounded like. Reading through early reviews of “Loser”—his 1994 breakthrough single and trademark anthem—it almost seems as though critics were taking a musical Rorschach test. Some heard the funky drum loop from Johnny Jenkins’ cover of Dr. John’s “I Walk on Gilded Splinters” under Beck’s stream-of-consciousness verses, and heard slacker rap. Others honed in on the Delta blues guitar lick juxtaposed against the lyrics’ feverish imagery, and called it the new Dylan (Beck said he was aiming more for Chuck D). More than a few simply threw up their hands and called it anti-folk, a contrived catchall term for pretty much any musician working with an acoustic guitar and ironic thrift store t-shirt during the early-to-mid ‘90s.

One thing the critics seemed to agree on was that “Loser” was an interesting fluke, a novelty song whose lyrics encapsulated Generation X’s existential angst, and whose ramshackle production may have said something about postmodernism’s encroachment on pop music… but was ultimately slated for one hit wonder status. Then Beck did something interesting: he didn’t go away. He kept making records that defied any attempts to slot them into any particular genre. Critics and fans pretty quickly made the smart decision to stop trying, and let Beck records be Beck records.

If you knew absolutely nothing about the evolution of Western pop music since the Sixties, you could get a pretty decent education just by listening through the music Beck has sampled over the years. There’s obviously a lot of funk in there: not just Johnny Jenkins, but Herbie Hancock, Sly and the Family Stone, and the Ohio Players. And he helped revive interest early hip-hop aesthetics by sampling Mantronix and DJ Grand Wizard Theodore and the Fantastic Five—on top of adopting a distinctly old-school rap style that can be heard on cuts like “Where It’s At.”

Beck’s influence, however, is all over the place. He’s sampled fellow eccentric musical visionaries such as Serge Gainsbourg and Nick Drake. He’s bitten avant-indie rockers like the Melvins and the Frogs. Conversely, he’d dip into the Jurrasic period—when dinosaurs like the Rolling Stones and Grand Funk Railroad ruled the earth—at a time when his fellow soldiers in the alternative rock revolution were supposed to be revolting against it. He’s made entire album-length tributes to old-timey folk, California synth funk, and Brazilian tropicalia.

In 2018, switching up genres like that isn’t much of a big deal. One of the biggest rappers in the world just released an album that jumps from Chicano soul to Kenyan psychedelia to icy techno, and all anyone can talk about is its references to MAGA hats. In a Spotify-connected world where anyone can listen to anything at any time, sticking to one particular sound seems like a fossil of an idea.

So it’s easy to forget how big of a deal it was for Beck to be doing that back in the ‘90s, when cultural gatekeepers like music critics and record store clerks maintained a strict taxonomy of musical styles, and artists and listeners were expected to pretty much choose a lane and stick to it, or risk being labeled  as posers. The idea that a musician might be influenced equally by Dust Bowl-era folk music and Public Enemy was unorthodox; the idea that they might want to make music that reflected those influences in equal measure was basically unheard of.

Beck’s albums helped clear a path for a generation of artists who probably couldn’t stick to one genre if they tried, preparing listeners for a world where pop stars rap, rappers make rock records, rock musicians write songs for pop stars, and dogs and cats live together.

They also predicted the way listeners’ tastes would be shaped by streaming platforms. His knack for stylistic collage—combined with internet forums that broke down his samples and lyrical references—made his songs function sort of like little recommendation algorithms. If you liked the throwback block party vibe of “Where It’s At,” you very well might also dig the booming pre-digital hip-hop sound of Mantronix’s “Needle to the Groove”… and maybe Lee Dorsey’s smoothly funky “Get Out of My Life, Woman” too. Beck turned alternative rock fans into crate diggers the same way sample masters like DJ Premier did with hip-hop heads: by creating the same kind of rabbit-hole listening that makes Spotify playlists so addictive.

Beck’s influence isn’t just limited to people who are already music-obsessed enough to hang out on sites like WhoSampled.com. His 1998 album Mutations introduced American listeners to the sound of vintage Brazilian tropicalia (which was itself a pastiche of psych rock, jazz, and traditional Brazilian styles), creating a booming interest in the style that not only revived the careers of ‘60s groups like Os Mutantes, but also influenced a wave of musicians who set out to create their own tributes to the sound. The sexy dance party known as Midnite Vultures did something similar with electro-funk the following year, while 2002’s Sea Change basically did more to get people listening to Nick Drake than Nick Drake and his team ever did.

Twenty-five years later, after building a catalog that’s as diverse as it is influential, it’s still impossible to slot Beck into one particular genre. Luckily for Beck–and for the rest of us–the whole idea of genre boxes has become outdated. What some critics mistook for a flash in the pan turned out to be music’s future.

01. “I Walk on Gilded Splinters”
by Johnny Jenkins

02. “Needle to the Groove”
by Mantronix