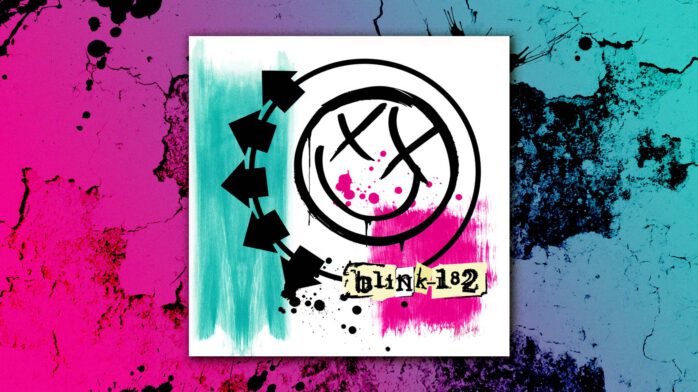 There’s never been a clear name for Blink-182’s fifth album, and that’s strangely fitting. To the band and their fans, it’s untitled. To the rest of the world, that pop art inspired smiley face on the cover framed by the band’s name made the album self-titled. Released on November 18, 2003, the record marked a departure from Blink’s core values; rather than a darker, heavier affair like 2001’s Take Off Your Pants and Jacket, what was found instead was a collection of songs that owed more to new wave and goth—specifically, the Cure.

While it’s easy to see the Cure’s influence (hell, Robert Smith contributed vocals to “All Of This”), untitled wasn’t just Cure cosplay. Blink had long studied pop music; A cursory listen to Enema of the State shows that the record’s biggest hits, “What’s My Age Again?” and “All The Small Things,” skirted a line around punk, showing the kind of pure effervescence that landed them in constant rotation on MTV’s Total Request Live and in the CD players of adolescents across the globe.

Untitled traced a similar course to Enema up top. While the flanged drums in “Feeling This” would all but define Travis Barker’s playing for the next decade, the song was a more ambitious version of the band’s biggest hits. “Feeling This” showed Barker as the player he was: A human that was endlessly malleable. No longer relegated to lightning fast fills and uptempo blasts, he injected hip-hop-flecked grooves into “Feeling This” that remain a hallmark of his drumming to this day. When the guitars kick in equally as effects-laden as Barker’s drums, the song avoids the direct didacticism of the band’s other album openers, expressing the pastel hues of untitled’s cover in the music itself.

Even at their most direct moments on untitled, Blink rarely opted for the straightforward. “Obvious” pulled back in its chorus, positioning DeLonge’s voice as a layer of texture instead of the vehicle for a sing-along hook. “Violence” had a go-for-broke, stadium ready chorus, but it was built on Blink’s version of a chopped-and-screwed bridge. “Down,” for all it’s plaintive, post-hardcore movements, featured as forlorn of a hook as the band ever crafted. Even “Stockholm Syndrome,” “Go,” and “Easy Target” had twists and turns that broke from any expected formula. Shocking as these moments were, they paled in comparison to the likes of “I Miss You,” “Always,” and “I’m Lost Without You,” songs that each could claim a place on Disintegration or Wish without anyone being the wiser.

Even as the band ebbed toward the mawkish, they succeeded because of their commitment. When Hoppus feebly stated “I Miss You,” his voice longing a little more with each passing syllable, it was completely believable. Songs like “Violence” or “Down” showed that Hoppus no longer sounded like an ebullient kid, instead injecting a kind of joyless misery that could pass for Ian Curtis at his most disaffected. And while Blink tended to have songs that were more discernibly Hoppus or DeLonge, untitled showed the two trading off verses and choruses freely, often singing over one another and lending more robust backing vocals than ever before.

While departures such as this are often a recipe for backlash, untitled was one of the band’s most critically-lauded, a commercial force that went double platinum in the United States, Canada, and Australia. While that’s all plenty impressive, the record’s impact could be measured just as easily by looking at how pop-punk was forever changed after the album’s release. Jerry Finn had been an in-demand producer since he mixed Green Day’s Dookie in 1994, but it was his work with Blink that would cement his status as a pop punk hitmaker. And in the wake of untitled, plenty of others would look to this record as a way of expanding their own tonal palette.

Within a few years, Finn would helm Alkaline Trio’s Crimson, a record that saw the band take their own stab at such a sound. Though it had more goth overtones, the influence of untitled felt most pronounced here. The same could be said for New Found Glory, who cleaned themselves up and dipped into classic new wave on 2006’s Coming Home. Fall Out Boy’s Infinity On High and Folie à Deux took Blink’s lead and showed that pop-punk bands no longer needed to be shy about that whole “pop” thing, making the kind of genuine emo pop that would inspire countless others.

Amidst the breakups, reunions and lineup changes, Blink-182’s untitled remains a singular piece in their discography that served as the launching point for an entire wave of bands that would dominate the landscape in the mid-to-late 2000s.There aren’t many records that people can point to as changing the landscape of an already established genre, but untitled is one of them, if only because it showed everyone that pop punk is only as limiting as you make it.