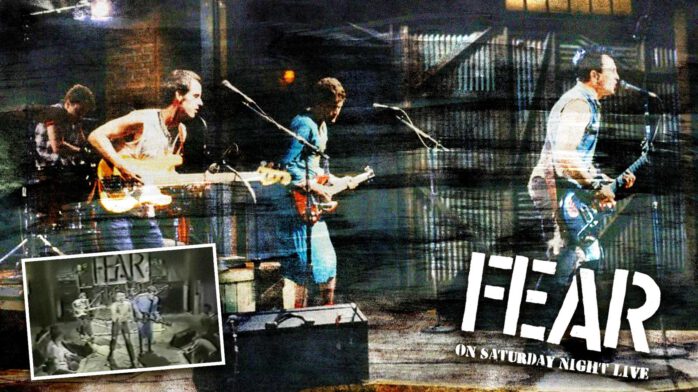 Remember That One Time FEAR Caused Chaos on ‘SNL’ and Got Banned For Life?

It can be hard to imagine now, with lifetimes of video only a couple clicks away, just how revelatory watching something like a live punk rock performance could be during television’s salad days. So it should come as no surprise that in the early-‘80s, when punk rockers first managed to barnstorm mainstream TV, it was alien, kind of scary, and guaranteed to cause a hoopla.

There are several great examples of this, many of them now readily available on YouTube (will modern wonders never cease?), but few offer the satisfying kicks of Fear’s notorious appearance Saturday Night Live on Halloween, 1981. These five scant minutes of hardcore burlesque—combined with some ill-timed profanities from the peanut gallery—got Lee Ving’s band of goofball provocateurs permanently banned from the show, but not before doing the holy work of giving millions of people their first taste of hardcore music. Surprisingly, the segment still manages to come off almost like a legit punk gig, albeit probably the only one to ever take place at 30 Rock.

The story goes roughly like this, although portions of it go into tall tale territory: Fear fan John Belushi greased the wheels to get the band on Saturday Night Live (he was hoping to make up for wasting Mr. Ving and company’s valuable time on a song they’d recorded together for the film Neighbors, which had been rejected by the producers). In the interest of making their national television debut convincingly punk, Belushi arranged for a handful of hardcore kids to come up from DC for the show and slam dance in front of the stage. He was expecting maybe 15 people to arrive in total, but the caravan made several stops along the way, ultimately bringing closer to four dozen rabble-rousers (including Ian MacKaye from Minor Threat, the Meatmen’s Tesco Vee, John Brannon of Negative Approach, and Harley Flanagan and John Joseph, who’d later go on to form The Cro-Mags). These punks proceeded to cause a ruckus on the SNL set throughout the night, and selflessly formed a raging pit during Fear’s camera time for the benefit of the home viewing audience.

These days, the friendly, frenetic pseudo-violence of a mosh pit is something most people understand, even if it takes a slightly more rarefied spirit to see the appeal of being in one. Back in 1981, though, the whole scene looked like actual chaos to most people, not least of all the SNL staff. One technician at the time was reported as saying: “This was a life-threatening situation. They went crazy. It’s amazing no one got killed.” This is undoubtedly more than a little alarmist (though some reports suggest there was some actual tension, and even violence, between the DC and NYC punks, and Ving claims that stage manager Dick Ebersol got hit in the chest with a jack-o-lantern), but compared to a typical SNL performance by the likes of Boz Scaggs or Linda Ronstadt, Fear’s appearance was indeed a pretty fucking wild, unpredictable thing to put on national television.

Funny, though: it wasn’t even one of Fear’s members that took the step over the line which got them kicked off the show. Not that the band didn’t do their best to provoke: Ving spent a good portion of their segment baiting the locals, talking about how good it was to be in New Jersey before launching into the band’s anti-NYC anthem “New York’s Alright if You Like Saxophones.” This riled the punks up so good that it moved MacKaye to grab the mic and scream “New York sucks!”

It was Brannon, though, who took the mic next and really got the job done, hollering “Negative Approach is gonna fuck you up!” live on network TV. According to most reports, this was the last straw, causing NBC’s then-president Brandon Tartikoff to get on the phone from the comfort of his bed and demand that the show fade to stock footage immediately.

The punks were reportedly locked in a room for two hours to prevent them from screwing up the rest of the show, and Fear were immediately banned from the show for life and told that their performance would never be rebroadcast (SNL relented years later, though the footage was edited in reruns). Reports of studio damages varied wildly: when a reporter suggested to Ving that figures being thrown around were in the neighborhood of $200,000, the singer balked, claiming that the damages were at least twice that (when in fact, the band actually only had to pay around $40 in labor penalties). It all only served to make Fear more notorious.

Some performers who’ve been banned from SNL are eventually invited back, and even become part of the show’s lore (just ask Elvis Costello, or the Replacements, who were invited back to 30 Rock to perform “Alex Chilton” on Lorne Michaels-produced The Tonight Show Starring Jimmy Fallon, just over 10,000 days after the showrunner banned them for life after similar SNL shenanigans), but Fear have yet to be offered that olive branch. That’s okay, though: when talking about the incident in recent years, Ving still acknowledges his lifelong SNL ban with perverse punk pride, and it’s not hard to see why. After all, what’s more punk than having the “Not Ready For Prime Time Players” not be ready for you?