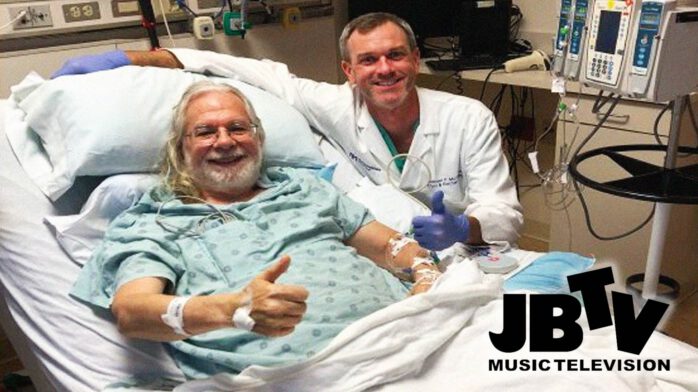 Over the past 35 years, Jerry Bryant has defied all kinds of odds to turn his televised music showcase JBTV from a DIY passion project into the longest running rock ‘n’ roll TV show in history, and a Chicago musical institution. Now Bryant is facing a hell of a new challenge: stage 4 colon cancer.

Yesterday, the official JBTV Twitter account announced that the show’s founder and host was diagnosed with stage 4 colorectal cancer, and that following two surgeries to remove tumors from his colon and lungs, he’s now beginning chemotherapy. “Jerry’s doctors are very optimistic that they have removed all of the cancer,” according to a press release sent to Riot Fest by JBTV producers, “and he will now begin a six-month chemotherapy treatment to make sure that he is clean.”

JBTV‘s Jerry Bryant has been diagnosed with Stage 4 Colorectal Cancer. This is a life changing moment for Jerry and JBTV is dedicating new programs including its yearly TV marathon to promote “Health and Cancer Awareness.” Read more: https://t.co/XWXVpNmgGq pic.twitter.com/whRpBFc0Pp

Bryant is one of Chicago’s most passionate music fans, combining a keen eye for talent with a freewheeling disregard for genre. Over the years, his show’s given ground-floor breaks to future legends like the Smashing Pumpkins—JBTV was the band’s first television appearance—and covered nearly every style of music that’s popped up that under the umbrella term “alternative music” over the past three and a half decades. Bryant’s a tireless supporter of local music as well, a regular presence at gigs around town who always made room on his stage for homegrown acts.

Of course “local music legend” isn’t the kind of job that typically comes with health insurance. There are several events being planned to help cover some of Bryant’s medical expenses, and donations are being accepting here.

In the meantime, Bryant’s planning on continuing to keep JBTV going. According to the press release, “Jerry wants everyone to know that although these obstacles are difficult and there’s a lot of trials to come,” and Bryant is “committed more than ever to helping artists and exposing new music.” Moving forward, the JBTV platform will also be utilized as a vehicle for promoting cancer awareness and screening in an effort to help save lives.

That, and starring in Riot Fest teaser videos, of course…

To that end, fuck cancer. Also, Riot Fest wishes its friend Jerry a speedy and smiley recovery. We’ll see you in September, ya old lug!