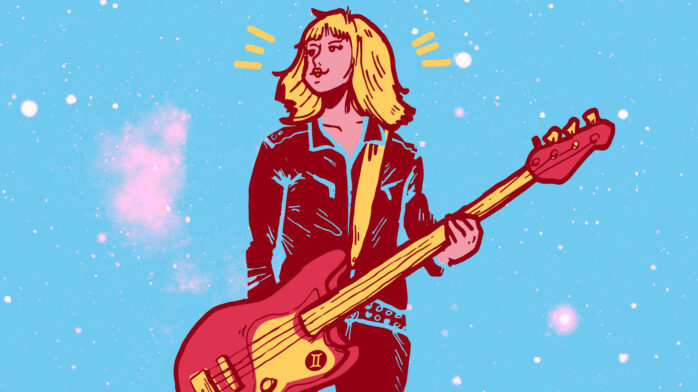 Suzi Quatro on Leather Jumpsuits, Gender, and Being a Gemini

Geminis have something of a bad reputation: haters say we’re impulsive, two-faced attention whores, and it doesn’t help our case that famous Geminis include the likes of Donald Trump and Jeffrey Dahmer. Still, I choose to believe the narrative that Geminis, above all, are charming and quick-witted, and the most gifted multitaskers in the zodiac. Few are better suited to disprove the astrological slander than self-professed “typical Gemini” Suzi Quatro.

Aside from being an outspoken Gemini twin, Suzi is a certifiable rock ‘n’ roll legend. Arguably the first woman to be a major rock star, she got her start in 1964 playing bass alongside her sisters in the Pleasure Seekers, eventually leaving her native Detroit in 1971 for a solo career in England. With a now iconic all-black-leather uniform, she released hits like “Can The Can,” “The Wild One,” and “Stumblin’ In.” Ever the multitasker, she also played the iconic role of Leather Tuscadero on Happy Days, wrote a memoir—Unzipped—and is currently the subject of Suzi Q, a documentary by Liam Firmager about her life and legacy.

Last month, she released her latest album No Control, much of which she co-wrote with her son Richard Tuckey. We sat down with Suzi to talk about the new album, that iconic leather jumpsuit, and how being a Gemini helped her become the rock ‘n’ roll legend that she is.

RIOT FEST: You wrote a lot of this album with your son. Did his presence on it change the way you looked at writing the album, even when you were working on it solo?

SUZI QUATRO: Yes, it did. In fact, I have to give him credit for what he did do—I think he had a vision in his mind of the album. He’s always said to me, “You need to make this kind of album!” He never explained it, he just used to say “I know what to do.” So we started to write together, and he kind of pushed my—for want of a better phrase—my Suzi Quatro buttons. I found myself responding and reacting to whatever he was pushing.

He’s a real riff guy; I wouldn’t have written that riff on “No Soul/No Control.” That’s his riff. I just went, “Oh, that’s interesting. Let me just take that in the other room.” [We] put that down riff and in 20 minutes, the song was there. So he pushed me in different directions, because obviously he’s got his own way of playing it, his own ideas, and we just married them perfectly. What a wonderful experience!

Was it strange for you to see the vision of you as a rock star through the lens of your son?

Yes, that’s exactly what happened. I saw myself through his eyes. It was surreal, in a way. I mean, this is a kid who’s grown up watching his mom on stage do what she does. And he was passionate—he stuck to his beliefs all the way through. We had a few altercations, like you’re gonna do when you’re making an album, but he was passionate about what he wanted out of this. He didn’t sway for an instant. I don’t know where he gets the balls from. [laughs]

A lot of your early lyrics—though generally about the same kind of independence and empowerment celebrated by men in rock—seem expressly political coming from a young woman, especially at that time. You explore the same themes in your new music; does it still feel political to you?

I’m not political, but when I am, it’s big on personal freedom. I think that’s my mantra: like the song [“No Soul/No Control”] says, “I gotta hold on to me.” Isn’t that the lesson for everybody? Hold on to you, whatever that is. It doesn’t matter if you’re a fucking housewife.

I became an honorary Doctor of Music at Cambridge in 2016, and I gave a speech at the end— and that’s when I started to cry, because I was looking out at all these academics thinking, here I am in a cap and a gown and I didn’t even finish high school—and I said to them, “There’s a little light in you. Whatever it is, find it, switch it on, and let nobody switch it off.” That’s how I feel about life, and that’s what this album is all about. It’s called No Control—do not tell me how to think, how to feel, what to do, what to say. This is me.

Can you tell me a bit about how the iconic all-black-leather look came to be?

It started way back in ‘56. I was watching [Elvis on] The Ed Sullivan Show and my elder sister screamed—because she was the right age to be screaming. I didn’t know why she was screaming, so I turned and looked at the TV and I got drawn in like a magnet. I had the epiphany, at that age, that one day I was gonna do that. It didn’t even occur to me for an instant that he was a guy and I was a girl; I guess I just don’t really do gender.

It kept with me my whole life, and then I was in a band [the Pleasure Seekers], and then I saw [Elvis] at his comeback special and he had the leather on. I then had another epiphany that I was going to wear leather. So after coming to England and getting my English band together, and making my first record that was about to come out, the image discussion happened with my record company boss; he said, “What would you like to wear?” And I said, “Leather.” He said, “No, it’s old fashioned,” but I insisted. Then he finally said, “OK, you can wear leather—what about a jumpsuit?” And I thought, what a sensible idea! Because I jump around a lot, and everything stays in place.

It wasn’t until I did the photo session and I got the pictures back that it was sexy—I had no idea. I was that stupid! I just thought it was a good idea. A lucky accident! And it suited me, so much so that at 68, I can still wear it now.

You mentioned that you don’t really do gender—you’re obviously already massively successful, but, with gender ambiguity being much more widely accepted now, do you think your career would have been any different had you started today?

Well, it’s all hindsight—because I can’t pretend that I set out to do this, this, and this—I was just being me. But looking back on it, I think that it had to happen as it happened. It couldn’t have happened any other way. It had to be someone like me who doesn’t do gender. A little bit androgynous, not out there with the attitude, “Hey, I’m a girl, look what I can do!” That was never my vibe. It was sexy without trying to be sexy. I think I always have and always will be just a one-off.

It seemed like in the 70s, rock stars (even the men) were treated as pin-ups. What was it like to be on the receiving end of that attention?

[Laughs] It makes me laugh, because, you know, you never see yourself that way. But I’ll get nonstop guys coming up saying, “Hey, I had you on my wall.” And then they want to share the rest of the story with me, and I say, “Thank you, I get the picture.” [laughs] It’s a compliment that you’re a pin-up.

One of the funniest ones I’ve ever had was when I was with my good friend Andy Scott [of Sweet] at a show together. We were at the after-hours party, and one of the main actors of the show was talking to Andy, telling him how wonderful Sweet was, and that he was a big fan, blah blah blah. And I said, “Hey! What about me?” And he said, “You helped me through puberty.” [laughs] It wasn’t exactly what I wanted to hear, but it was kinda cute.

Can you tell me a bit about the documentary you’re making with Liam Firmager?

Yes, I think it’s coming out in September. It’s four years in the making. He contacted me, and I liked his vibe. He seemed like he really wanted to do a real documentary. I did say to him, I only had one criteria: I don’t wanna whitewash. I don’t need a bunch of talking heads telling everyone how wonderful I am. That’s not what a documentary should be; it should be the story. I said, “As long as what is in there is true, even if it might be embarrassing for me. If it’s true, it’s in; if it’s bullshit, it’s out.” I’m a big stickler on truth.

Is the documentary also following you now?

Oh, yeah. He just finished filming some gigs in Australia. We did a little catch-up, talking about this album. I think they’re finally now in the editing stages and then I get to approve the final cut.

What is it like to be the subject of a documentary when most of your experience in front of the camera has been acting and performing on stage? Were there any obstacles in flipping that switch and being totally candid?

Liam has said to me that he’s never, ever talked to anybody who opens up like I do. I am a really open person. If I cry, I cry. I don’t give a shit. I feel what I feel, I think what I think. I don’t hide it. I’m a real walk-through-the-fire kind of girl. If there’s something painful in front of me, I won’t go around it; I’ll go directly into it. I’ll burn, I’ll cry, I’ll hurt, and then I’ll think about it, learn what I have to learn, and I’ll walk out the other side.

Regarding your acting career, I wanted to touch briefly on your role as Leather Tuscadero. What was it like to split your time between the rock business when it was at its most decadent and being on a family friendly sitcom?

It’s just two different hats. I’m a typical Gemini—I can wear eight million hats at one time and still have time to change. It was just an acting role, and I treated it as such. It was a wonderful show and I’m thrilled to have been a part of that iconic show. I was acting a role and I was thoroughly enjoying myself. In fact, I was going from the set of Happy Days to the studio at night to record If You Knew Suzi…

It’s funny you mention you’re a Gemini, because I was just about to bring that up. I’m a Gemini too—

I knew you were!

I nearly just said it to you a couple of seconds ago. I heard you connecting when I said I could wear a million hats. So now we talk the same language.

[Laughs] Well, I was wondering how you think being a Gemini has contributed your career?

I think it’s been very valuable in being able to roll with the punches, and being focused. Geminis, when we want something, we go for it. If we’re going from A to B, then nobody better get in our way because that’s where we’re going. And it’s nice to be able to wear different hats, try on different suits, you know? We’re like onions: there’s so many layers to peel back. You’re never bored with a Gemini. Maybe infuriated, but never bored. [laughs]

It’d be worse to be bored, I think.

I think so! If anyone called me boring, I’d go out and kill myself.