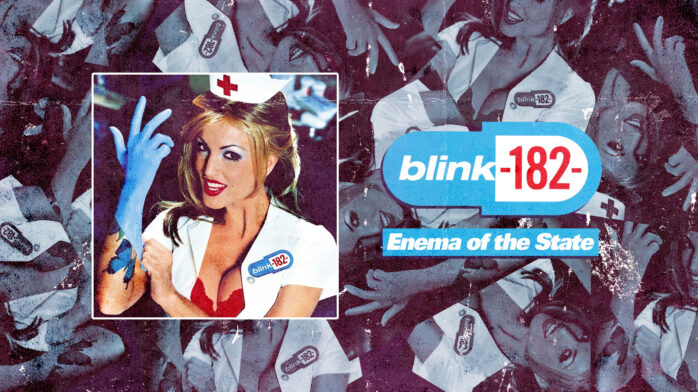 21 Years Later, ‘Enema of the State’ Stands the Test of Time

I specifically remember the evening of June 1, 1999. It was a Tuesday, mere days before the very end of my middle school career, and after getting picked up from Lundahl Junior High in Crystal Lake, Illinois by my mom, she drove me to Best Buy to purchase the brand new Blink-182 CD: Enema of the State.

It stands so clearly in my head for so many reasons: it was the sound of one of my favorite scrappy pop-punk bands “growing up” right as I was about to enter the summer before high school; the songs felt massive and almost cinematic, perfectly soundtracking a new era of hormones and uncontrollable emotions and changes; but mostly, it was that Enema of the State, from front to back, fucking rips.

I had a full-on crisis at the beginning of this month when I realized that Enema of the State turns 21 this year. It came out a full-on lifetime ago, in a time when CDs came out on Tuesdays and when Best Buy carried CDs—a time when MTV not only played music videos, but a time when punk and nu-metal acts were sandwiched between boy bands on-air. Enema came from a purely different time in American history, but as I discovered when I dipped my toes back in for a two-decade anniversary revisit listen, it still manages to still sound fresh, timely, and alive.

But for as much as the record changed my life (and of so many peers of mine), the people it affected the absolute most were the members of Blink-182 themselves. Three trashy skater kids from Southern California—who had spent a few years on Warped Tour playing sloppy, remedial pop-punk that sounded like a cross between NOFX and Screeching Weasel—suddenly were thrust into actual pop-stardom at a level that rock bands have rarely seen before or since. They became complete heartthrobs, appearing on magazine covers, late-night TV shows, and plastered on the inside of an untold magnitude of high-school lockers. And somehow, they avoided being branded complete and utter sell-outs by the punk community.

On Enema of the State, the band teamed up with Jerry Finn for the first time, a producer perhaps best known for working with Green Day on their breakthrough release Dookie five years before. The band approached the session with their typical three-chord, hyper-melodic, breakneck skate punk, and the production value was able to walk a nearly-impossible to find line that appealed to literally everyone: the performances were real and spirited, the recordings bright and slick—but loud and proud like an actual band, the songs were economical and no-nonsense, and the hooks were massive and undeniable. It appealed to everyone.

The breakout star of Enema of the State was the then-new, then-unknown drummer Travis Barker. Blink-182’s original drummer Scott Raynor was a more-than-serviceable punk rock anchor, but the fresh addition of Barker—with his beyond cool demeanor and bodysuit of Descendents and Dag Nasty tattoos—was a prodigy, infusing the simple punk tracks with astonishing fills, lightning-quick hardcore beats, and an unexpected hip-hop flare. To this day, he’s the most recognizable member of the band.

Brian Eno once famously quipped while discussing the fact that the Velvet Underground only sold 30,000 records while they were operating that “everyone who bought one of those 30,000 copies started a band.” Enema of the State has sold over five million copies, and for better or worse, the same could probably be said for all of those people. For as great as Enema is, however, it can be blamed for some seriously sad trends in the punk rock zeitgeist. If it weren’t for Enema, we probably would have never seen the success of several unfortunate “mall punk” acts without Enema; Nor would you have to cringe at high school photos of yourself in shin-length Dickies shorts and youth small t-shirts. You also probably wouldn’t have spent all your teenage allowance on single-knob guitars and eyesore drum sets with royal blue hardware.

This is Riot Fest, after all—a place where the joys of nostalgia are encouraged to run more freely than anywhere else. But the question still stands: how does Enema of the State hold up, 21 years later? I’m happy to report that—for the most part—it holds up brilliantly.

Opening up with “Dumpweed,” sung by since-departed guitarist Tom DeLonge, is the quintessential pop-punk opener—and everything explodes onto the scene, every strength showcased: Delonge’s loopy guitar leads are anchored by Barker’s dizzying drumming and Mark Hoppus’s rich bass chords. If DeLonge is the heart and soul of Blink-182, the second track on the album, “Don’t Leave Me,” helps cement the idea that Hoppus is the brains, showing that three simple chords and a pushy rhythm can be more effective than any complicated lead or solo. The record never lets up over its 12 tracks and 35 minutes, with songs about never ending summers of fun (“The Party Song,” “Anthem”), youthful bewilderment at the universe around you (“Aliens Exist,” “Going Away to College”), and crushing emotional blur of the adolescent experience (“Adam’s Song,” “Dysentary Gary”). Enema of the State is so expertly executed that, at times, it feels like it was engineered in a lab—like it was scientifically predicted that I would be the sonic compliment to so many life-changing summers the world over.

When stacked up to some other mainstream-leaning, genre-defining albums like the aforementioned Dookie or Rancid’s And Out Come the Wolves—even The Offspring’s Smash—Enema of the State’s occasional goofiness and Blink-182’s cute image both feel softer in comparison. But I encourage any skeptics to take a listen and see for yourself: 21 years later, Enema is the genuine article and a stone-cold classic. It’s a record that is, without question, the most important pop punk album of this generation.