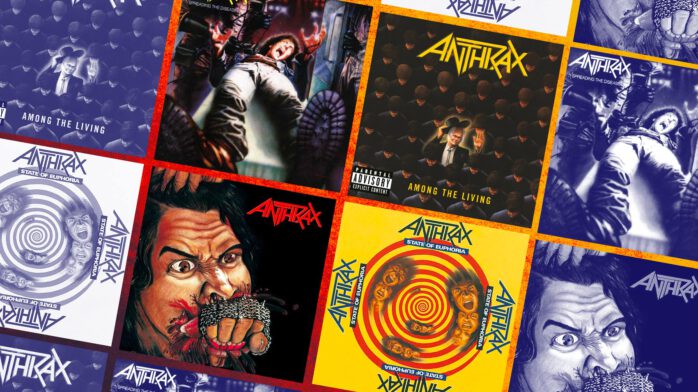 When Anthrax Ruled the 80s

As one of the Big Four, the East Coast thrashers engineered a way of metal that remains rightfully worshipped today
By Kevin Warwick / August 12, 2019 / Editorial

It’s a lot to live up to, being one of the Big Four. When compared alongside monoliths like Metallica, Megadeth, and Slayer, Anthrax has always seemed the scrappiest of the posse—often happy to rep blends of punk-influenced crossover thrash over straight-up, devil-horn-ready metal. The band’s East Coast fuck-you snarl pairs with its blown-out, treble-forward records like a fine Budweiser in a can, and when grouped together, the albums resemble their own canonical Big Four.

For sure, the collective of Fistful of Metal, Spreading the Disease, Among the Living, and State of Euphoria are at one turn devastating torpedoes of blast-beats and hyper guitar chugging and at another tongue-in-cheek maniacal diatribes. And though each was forged within the same fertile era of rag-tag metal, each also has enough of its own personality to rival the panache of Scott Ian’s present-day chin beard.

So let’s take a short stroll through Anthrax’s 1980s discography to not only better understand exactly the innovations that the band helped to spearhead, but also the metal tropes that they—just like the other three of four—held so dear.

OK, let’s not get into Neil Turbin’s peacocking Dickinson-style vocals—or Anthrax’s spectacularly unnecessary cover of Alice Cooper’s “I’m Eighteen.” No, let’s pay homage to the album cover. It’s incredible and deserves the recognition; both for the unnecessary gore and brutality that’s depicted when a fist wrapped in spiked chain mail graphically bursts through the jowls and mouth of some poor bastard, and also for the impossible action itself.

First, as Ian acknowledges in a recent feature in Metal Hammer, there are two left hands depicted—one punching face and one clutching hair. Seems impossible, doesn’t it? Second, the way in which the sucker’s tongue just kind of flaps to the side as the rest of the face is pummeled . . . it’s too hilarious not to lock your eyes on.

Today, Ian might think the cover is ridiculous, but what the artist did—aside from also create the iconic Anthrax logo—was give the community a primo, hand-drawn metal cover that’s held up because of its absurd brutality. It’s easy to imagine a scruffy teenager, Fistful of Metal LP under arm, charging into his suburban home, flipping off his dad lounging in a worn La-Z-Boy, and heading to his bombed-out bedroom to drop the needle and headbang as loud as his mom allows.

Enter Joey Belladonna, the Anthrax frontman we all have come to know and love. Unlike Turbin, who was kindly asked to leave the band following Fistful, Belladonna lays down vocal flourishes that feature high notes without overwrought flair. And it’s on Spreading the Disease where Anthrax really settles into the trope of insanity being an inevitability of being metal. “Madhouse” is, of course, the album’s preeminent example. Not a straight-up barnburner, the track instead relies on its forceful rhythm and grooving dual-guitar riffage to get its point across alongside truly introspective and thoughtful lyrics like, “Four walls surround me / An empty gaze / I can’t find my way / Out of this maze!”

It’s really when Anthrax turns up the voltage and the guitars start to pinball off the drums in perfect step that a record like Spreading the Disease hums. For example, “Aftershock,” with it’s rapid-fire double-kick rolls and damn-near triumphant chorus, is an Anthrax track that, while it doesn’t stand out as one of their instant classics, shoves the record forward and moves the needle.

Ultimately, Spreading the Disease is the beginning of Anthrax’s most dominant era, during which Belladonna—the band’s current leader—takes the reins and leads guitarists Ian and Dan Spitz, (very underrated) bassist Frank Bello, and drummer Charlie Benante to the promised land of metal superiority.

Case in point. Anthrax’s greatest (and fiercest) album is also the one in which the very 80s production best suits the band’s bent. Belladonna’s vocals are settled into a mix that ramps up the rumble of the bass and drums, while the din of the guitars leads the ruckus rather than slices right through it like a white-hot knife. The whole of Among the Living has so much skate-video swagger that it’s easy to imagine the series of kickflips and nose grinds it inspired in every flipped-bill-wearing kid with a board and a death wish.

Also, let’s give a proper tip of the hat to Benante. Anthrax’s longest tenured member outside of Ian, Benante gets the recognition he deserves on Among the Living. The sound of the kick drum often resembles the rhythmic pounding of a speed bag by a boxer in a run-down empty gym. The way in which he sprints in step with Ian and Spitz is damn near poetic on tracks like “Caught in a Mosh” and “A Skeleton in the Closet.”

Ultimately, Among the Living is not to be fucked with—it’s reigned for 30-plus years as Anthrax’s masterpiece.

More polished and dramatic than its predecessor, State of Euphoria is downright melodic on its opener “Be All, End All,” using the range of Belladonna in a way that doesn’t feel canned but dynamic in a different way. Spitz’s flaming solos are much tighter and squeal-heavy on State while verses of chunky chords occasionally venture into what a lethal hard-rock band wishes it could accomplish during its best bar gig. None of that is to say that the record is less metal than its 80s brethren—it’s just less raw and, really, less punk as a result.

State of Euphoria sprawls and experiments with a by-then established Anthrax sound, in part because the band has the ability and skill to do what they want. It’s a perfectly appropriate ending to what was a fertile decade for the bangers, and though it’s a slight step back ferocity-wise from both Among the Living and Spreading the Disease it makes up for it in metal hooks and anthemic choruses, both of which are filtered through their most excellent cover version of Trust’s “Antisocial.”

So, what’s really be said from here?