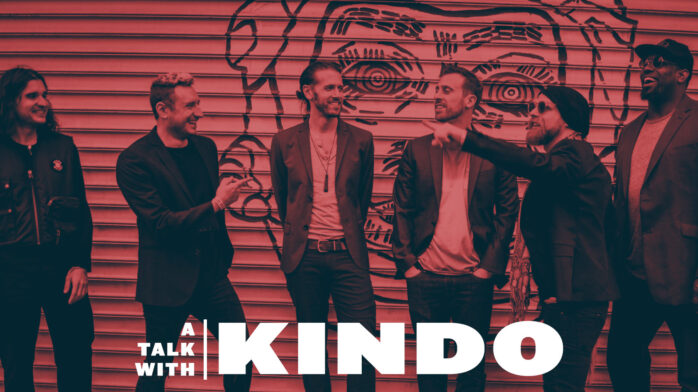 A Talk with Kindo on Patreon, Video Games, and 8-Bit Music

The age of streaming and social media has formed a bit of an odd landscape for artists—it’s often difficult to connect with fans in a meaningful way through the internet, especially when it comes to finding folks that are willing to pay for digital music.

The genre-bending Kindo, however, has carved its own path with a fan-funded Patreon, giving fans get a chance to hear monthly demos, 8-bit renditions, and other material. It’s a neat approach that many bands have found great success with, Kindo included—the band offers anything from cooking recipes, 1-on-1 instrument lessons, karaoke versions of songs, and a ton more.

Riot Fest got two members of Kindo on the line ahead of their show at Cobra Lounge this Thursday (August 8) to talk about crowdfunding, video games, and their steady catalog of 8-bit music.

RIOT FEST: First thing’s first—Kindo is playing Cobra Lounge on Thursday, August 8. How would you describe your sound to someone who’s thinking of going?

JOEY SECCHIAROLI (vocals/guitar): How I describe our sound depends heavily on my current mood. Right now we sound like a progressive-jazz-alt-rock-fusion band. Lots of genre-bending with a strong rhythmic pocket, and pop-colored vocals.

Among that genre-bending, you guys put out a lot of 8-bit songs. How did the chiptune craze set in for you?

JS: Most of the band was raised on a steady diet of Nintendo. It’s influenced our music tastes with [Nintendo’s] brilliant 8-bit compositions. Paying homage felt right.

ROCCO DELLANEVE (keys/vocals): I’ve done a lot of toy work that involves getting voices and music to sound good at 12kHz with a 29mm speaker thrown into some plastic. I mess with my friends who don’t hang out anymore because they have children by giving them a toy with my voice singing about numbers or ABCs—that way, I force myself into their lives. [Laughs]

Q: The whole chiptune side of Kindo feels like just one piece of a greater love for video games. What are some games that inspire your writing? What are you playing on the road?

JS: The Legend of Zelda: Ocarina Of Time. Mega Man. Every Final Fantasy ever made. Secret Of Mana…

JS: We mostly stick to Mario Kart with dump trucks of trash talking. I try to laugh at my failures when Karting.

Got a favorite of the Zelda games?

RD: Breath of the Wild, for me and most. Link To The Past get an honorable mention.

Do you find that your fans enjoy both the chiptune stuff and the album versions, or are there slightly different crowds for both?

JS: The chiptune audience is definitely a niche one. I imagine most of our fans don’t spin the chiptune tracks as much as our original arrangements.

Q: Talk to me about your Patreon. It looks pretty successful. Where did the idea come from?

JS: My buddy Louis Abramson from the band Jolly told me about it. He said we needed to do it and I believed him. I’m glad we did it, because I don’t know if we could carry on much further without the help. It’s an amazing blessing.

Q: What’s the most popular option/tier your fans go for? What’s your favorite thing you offer?

JS: Most fans go for the bottom three tiers. I think the 8-bit remixes and audio commentaries are the coolest. We ramble on about anything and everything.

Q: How has the Patreon changed the way you work as a band?

Q: The Patreon also gives fans the chance to hear songs early—subscribers got to hear most (if not all) of 2018’s Happy However After before it came out. Is it weird having your fans hear all your demos before the final product? Does it change the relationship with your supporters for the better?

JS: As a musician in the streaming era, having anyone who’s willing to actually pay for your recordings is a high privilege. It outweighs the weirdness of being raised in a era with a much thicker curtain between artist and fan.

Q: It seems to be somewhat tied into your whole DIY ethic: all the records are done in-house, and you guys aren’t on a major label.

JS: While there is a charm to the DIY path we’ve taken, it also has a low ceiling.  We’re are at a point now where we need to hire a team, or work with a label that can help us with the endless administration work that has to happen everyday.

Q: Anything you want to tease for the future? What’s next for Kindo?

JS: We have 18 new tracks and counting that we’ve written and begun producing since Happy However After dropped last year. We’ve got a good taste for live performance and the road now.  I think the band is really cooking right now.  There is blood in the water and we’re ready.

Kindo plays at Cobra Lounge on Thursday, August 8, with support from Sirintip, Adrian Bellue, and Rocco of the Snow (Dellaneve’s solo project). Tickets are still available, so grab ’em now and get your fill of progressive-jazz-alt-rock-fusion this Thursday.