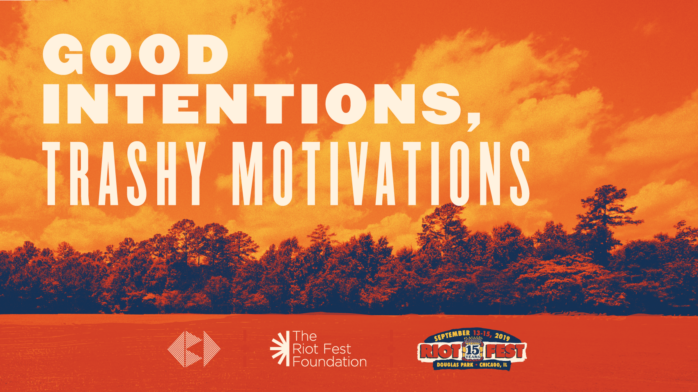 In a continued effort to help clean up trash around Riot Fest, we are hosting a slightly different way to take out the trash at this year’s festival: a live collage made entirely of trash picked up at Riot Fest.

The project is the brainchild of trashterpiece creator Jennifer Bachelder. She hatched the idea to come to Riot Fest while making a collage for a calendar: “When issuing a call for help collecting event wristbands for a calendar cover, it struck me that maybe Riot Fest could be a platform for doing something bigger.” Bachelder has been been making garbage landscapes and the likes for nearly 10 years. This year, she will create a collage of Riot Fest, at Riot Fest, using nothing but trash from Riot Fest.

Want to help out? We need your trash! Bachelder will have a booth at this year’s festival where you can donate your weird trash and enter to win the finished collage. All proceeds will go to The Riot Fest Foundation, and therefore, right back into the Douglas Park/North Lawndale community.

You can read more about the project via Bachelder’s website. Stop by the booth and help make some cool art, which you can watch develop live through each day of the fest—and if you’re too lazy to find the booth or have some other excuse, just do us a favor and pick up your trash.