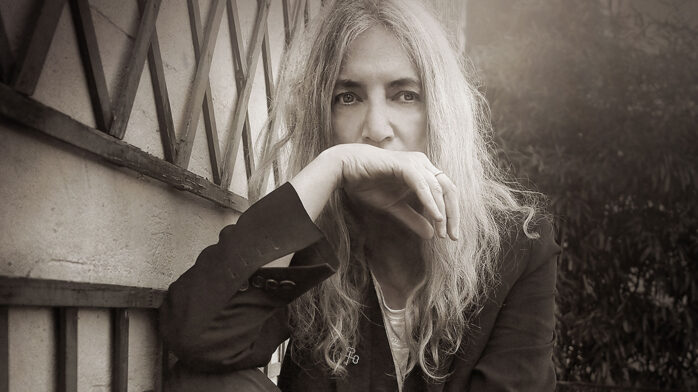 Patti Smith and the Merits of Self Preservation

Patti Smith takes responsibility for her own actions, if we can assume anything from her opening line to us: “Jesus died for somebody’s sins, but not mine.”

Over gentle, rhythmic piano, she introduced the first track off her first record, Horses—a cover of the Van Morrison-penned Them song “Gloria”—with the growled proclamation that her sins, her own, they belonged to her. In retrospect, it feels as though Smith is claiming unabashed ownership of her bohemian lifestyle as much as it is a thesis statement for what’s become her trademark: self-reflective spirituality.

Despite Smith’s razor-ragged hair and weapons-grade stage presence, a typical punk brat she was certainly not. Raised as a Jehovah’s Witness, Smith shirked organized religion as a teenager and put her faith in her own form of spirituality that was heavily influenced by Tibetan Buddhism and her dogmatic devotion to the poetry of Arthur Rimbaud. She arrived in New York in the late 1960s, bumming around only in the sense that she was literally homeless for a bit. She kept a regular job at Scribner’s Bookstore—where she met Robert Mapplethorpe—and painted and wrote furtively in her off-hours. Compared to the vast majority of her peers, Smith’s lifestyle was monastic, devoted wholly to her own creation.

By the time she released Horses in ‘75, she had already established herself within the New York art world as a painter, poet, and performance artist. Smith was the white sheep of CBGBs. Her drug use was minimal—offstage, at least, she was shy. She took her work, her art, and her life deeply seriously. While her work understood and acknowledged the inherent darkness of life, it didn’t dwell in it; instead, she looked toward the light.

Forgive the contradiction, but So much of punk’s traditional aesthetics are rooted in self-destruction. The please-kill-me of it all encompassed both ironic pleas for death and a lifestyle that may as well have been a literal one. Homelessness, rampant drug addiction, the eventual onset of the AIDS crisis—so few made it out alive, let alone free of personal injury, that it’s barely hyperbolic to call Smith a survivor. Ultimately, Smith’s refusal to succumb to that darkness was probably the punkest thing about her.

Unlike the majority of her anarchic peers on the Bowery, she seemingly used her music and art as tools of self-preservation, a source of emotional and mental nourishment when physical food was lacking. Thematically, the content of Horses was typically punk—Smith sang of sex and death and capitalism—but she was singular in her seemingly total lack of cynicism. Even in the album’s darkest moments, there seemed to always be a reason to keep going; to get up and take off your leather jacket and resist surrender.

As her career progressed, she’s only pushed deeper into that light. Her hits like “Because the Night” and “Dancing Barefoot” reveled in the intensity of life, the fullness one could still manage to feel in the face of seemingly total abjection. Her music is religious—not necessarily in any way that’s particularly traditionally faithful, but in the sense that she’s always questioning the universe, hoping and praying for answers yet still basking in the search for them.

And Smith still ploughs onward. It was only within the past decade that she released her instant-classic memoir Just Kids, and its follow up, 2017’s M Train, which brought her prolific catalogue of music and poetry to the ears and eyes and hearts of a new generation. On her 2012 album Banga, she wrote songs about contemporary tragedies like the 2011 Tōhoku earthquake and the death of Amy Winehouse; this year, her collaboration with the Sidewalk Collective, The Peyote Dance, saw her continuing her exploration of mystical interiority through her interpretation of the writing of French poet Antonin Artaud.

Of her few peers left standing, it’s hard to imagine anyone else reinvigorating their career in a way that’s anywhere near as successful and, more importantly, evolved as Smith’s. When the inherent darkness and despair of life asks for nothing but surrender, she’s never failed to get up and take off her jacket and defend herself—what could possibly be more punk?