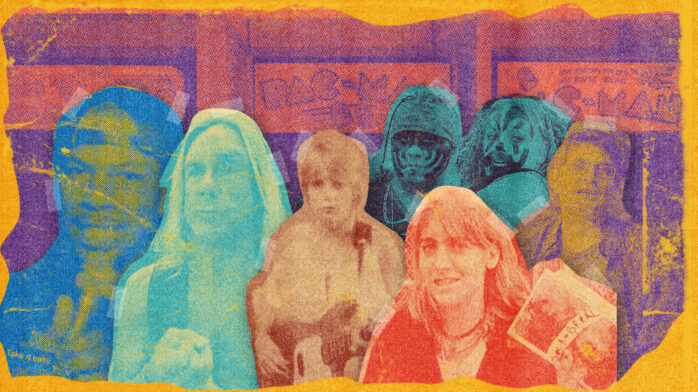 By now everyone’s pretty much run out of things to stream from the big platforms that are actually good. If you’re a fan of music docs, that means you’ve probably burned through the classics like Look Back In Anger and Searching For Sugarman and ended up scraping the bottom of the barrel, where it’s all no-budget fan-made artist portraits that were clearly edited on a 15-year-old copy of iMovie.

The good news is that there’s plenty of good music docs to stream that aren’t on the big platforms, from the wildly obscure to modern classics. And none of them cost anything to watch.

“That’s the girl who didn’t take a shower since Kurt Cobain died.” What was simply some guy filming his classmates turned out to be an unintentionally iconic snapshot of a grunge-soaked Generation X. Shot in 1996, Dirty Girls follows riot grrrl siblings Amber and Harper, social outcasts among their 8th grade classmates, as they stand against the status quo and pass out their zine across campus. It’s an in-your-face trip back in time—and Liz Phair’s “Batmobile” makes for the perfect one-song soundtrack.

If you’ve never seen You Weren’t There, stop what you’re doing and watch it right now. Joe Losurdo’s 2007 feature is the definitive documentary on Chicago punk, with a treasure trove of footage spanning its freaky, artsy early days through the emergence of the lean, no-frills hardcore that would come to set the tone for punk across the Midwest. Essential.

KRAUTROCK: THE REBIRTH OF GERMANY (2009)

From the rubble of the world’s most devastating wars, Krautrock rose as one of the defining art forms from Germany’s youth who sought to rid themselves of the dwelling guilt of their country post-WWII. Krautrock: The Rebirth of Germany documents the growth of Krautrock as a British-nicknamed genre from its roots in the 1968 German student movement into the influential bands that came out of it, like Can, Neu! and Kraftwerk.

Pitchfork’s Yearbook is a series of short snapshots from five key years in Chicago music history, from the psychedelic soul revolution of 1966 to a genre-defining string of indie rock classics in 1998.

It’s 1979, and Talking Heads are in the middle of working on Fear of Music, the second entry of a critically acclaimed trilogy of Brian Eno produced bangers. But even after the success of 1978’s More Songs About Buildings and Food, David Byrne and his bandmates are focused on living life as normal as possible. The South Bank Show’s television documentary on the band cuts between—almost humorously—lively concert footage and mellow interviews with the members about day-to-day life, like Byrne’s attempts to dress like “Mr. Average” (before realizing the upkeep it requires to be “normal”).

In the 80s and 90s, video game music was created using sonically limited technology and with the purpose of playing second fiddle to the game itself. But despite these disadvantages, it’s gone on to influence a huge number of musicians, producers, and DJs. This six-part series produced by Red Bull Music Academy goes deep into that history.

Steve Albini’s a true renaissance man: aggro musician, analog recording guru, surprisingly professional-level cook, and part time professional poker player. This 12-minute episode of PokerGO’s Stories from the Felt gets the story of his card-playing obsession straight from the man himself.

Merge Records: 25 Years in 24 Minutes gives you just what the title says: the history of one of the world’s longest running, most well respected, and most successful independent rock labels, with plenty of commentary from founders Mac McCaughan and Laura Ballance of Superchunk, plus covers of Merge classics by Superchunk, the Mountain Goats, and more.

The Note is Red Bull Music Academy’s series dedicated to lesser-known stories that shaped the evolution of global pop music, from the guy who designed the speakers that powered the disco revolution to the church pianist who defined the sound of trap music.

There is only one live concert P.A. setup in rock history that people know by name, and that’s the Grateful Dead’s legendary Wall of Sound. This short video breaks down the massive fortification of speakers and how its effects on the concert experience reverberate today.