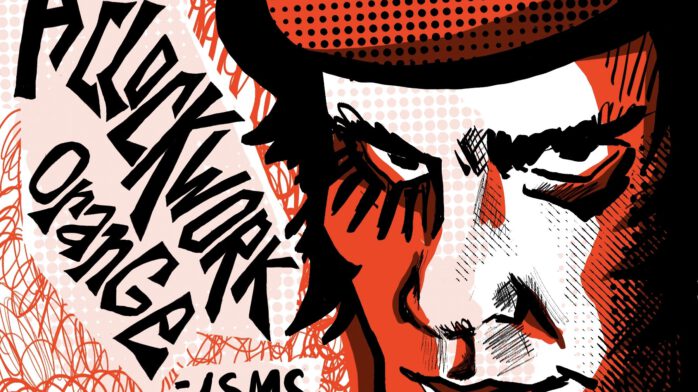 An Illustrated Guide to A Clockwork Orange’s Nadsat Slang

Warbles, yarbles, eggy weggies, and soomkas. Are you confused? That’s okay. The dystopian retrofuturist world of Anthony Burgess’ A Clockwork Orange is designed to be unsettling and strange, and the “Nadsat” lingo spoken by the story’s delinquent protagonists–influenced by the Russian language and the psychedelic prose of James Joyce’s Ulysses–is one part of its weird psychic landscape. Before our screening of Stanley Kubrick’s adaptation, brush up on your Nadsat with this illustrated guide. 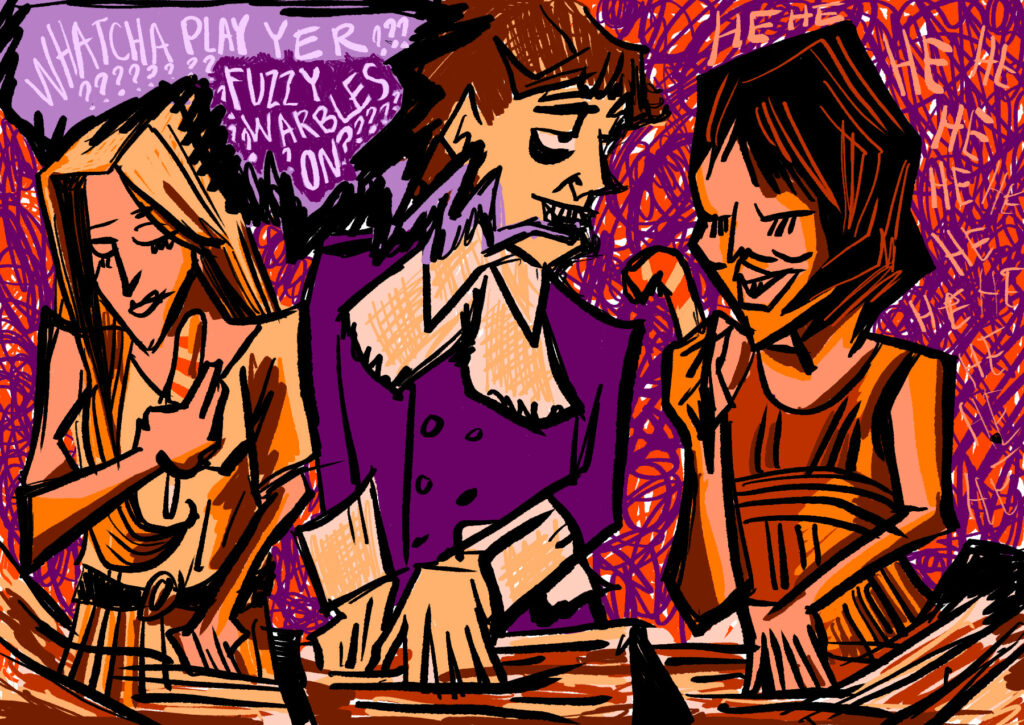 Calling all pretentious vinyl-obsessed demons: If you are a true record-loving connoisseur, then you MUST know about the fuzzy warbles, eh? The uncultured heathens around you will be extremely impressed with your flavorful way of speaking about records. Try using this term the next time you’re aggressively trying to flex your collection of Miles Davis 45s. “Oh those over there? Just my carefully curated repertoire of fuzzy warbles. Would you fancy a listen?” 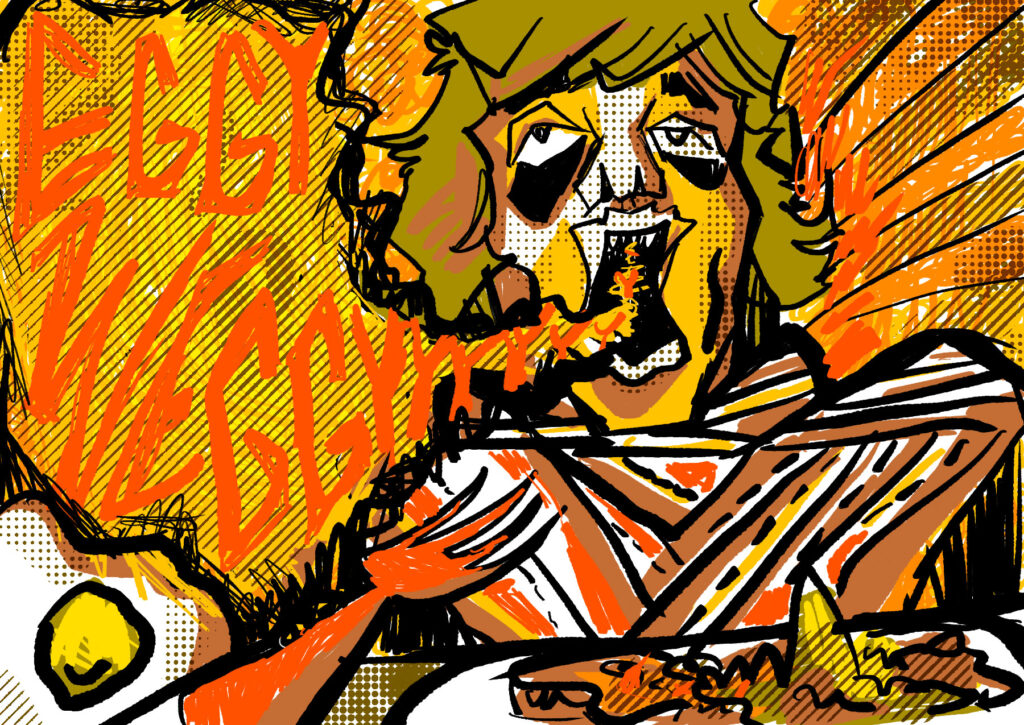 Who knew Anthony Burgess was a fan of UwU-speak? He was SO ahead of his time by incorporating juvenile versions of normal words: appy-polly-loggy[apology], gutti-wutts[guts]…you get the idea. It’s basically the Nadsat equivalent of saying, Cwunch Wap Supweme, or froot gummies.( Anthony Burgess is indeed for the kids.) Next time you go to a sticky-ass Dennys, make sure to ask your server for some scrambled eggy-weggys with your Grand Slam brekkie. 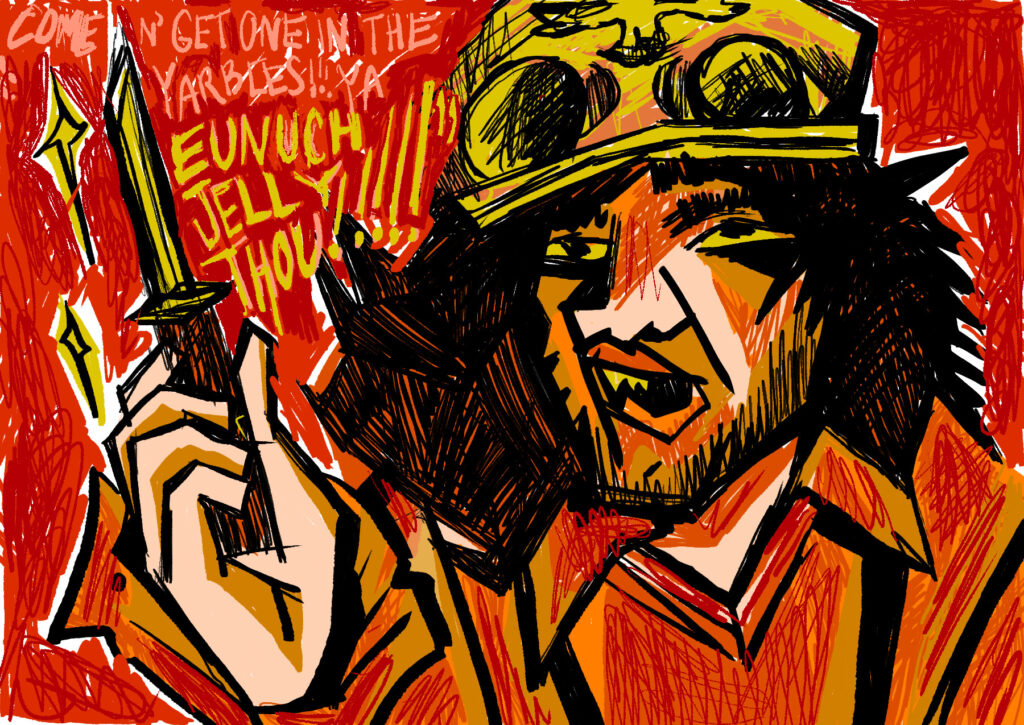 “Come and get one in the yarbles! If you have any yarbles, you eunuch jelly thou.”

The best burns are ones that make zero sense. Confuse a foe by spitting this insult at them; they will have no idea how to counter your goofy ass. The “jelly”component of this phrase is what makes it sound so absurd. The “gelatinous” element is a sure-fire way to spark immediate insecurity in your enemy. Jelly? Those are FIGHTING words. 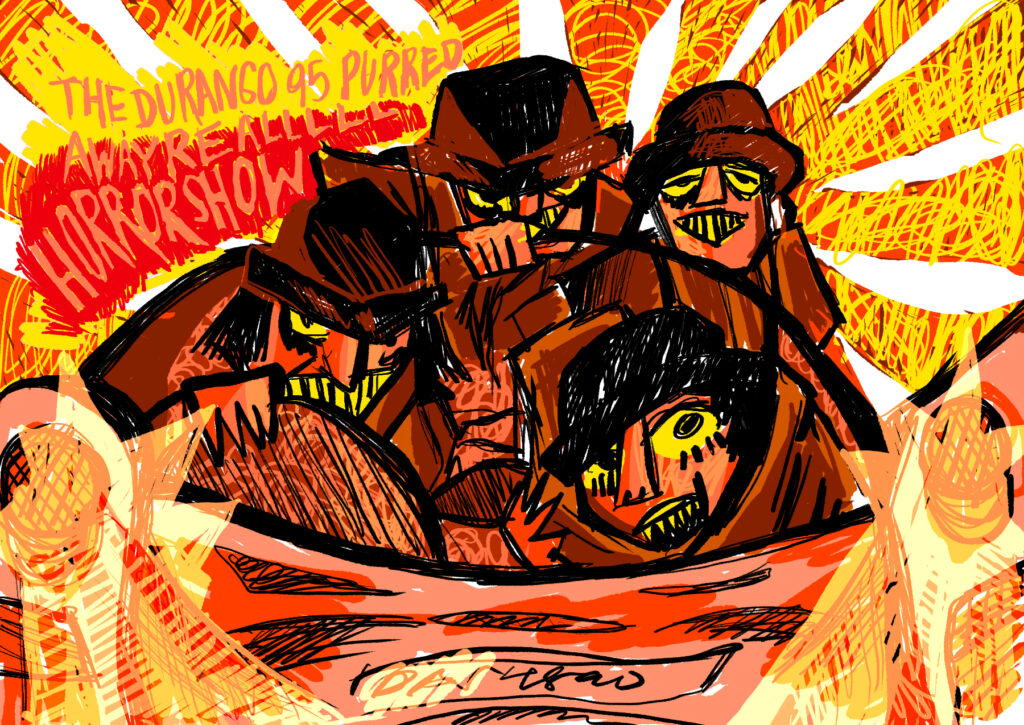 “The Durango 95 purred away real horrorshow.”

The way in which we express coolness is always evolving. There’s already a ton of ways to say it: rad, very, awesome, lit (I just gagged typing that.), tubular, hot…. But here’s a HOT new suggestion: Horrorshow. The term is actually an english spelling of the Russian word xorošo, of the same definition. The term has a teenage valley girl -ring to it, which makes it very easy to sneak into your daily conversation, if you’re under the age of 25. “Gee,That virtual Run the Jewels Tiny Desk concert was real horrorshow. Did you see when they made the background look like they were actually there? SO believable!” 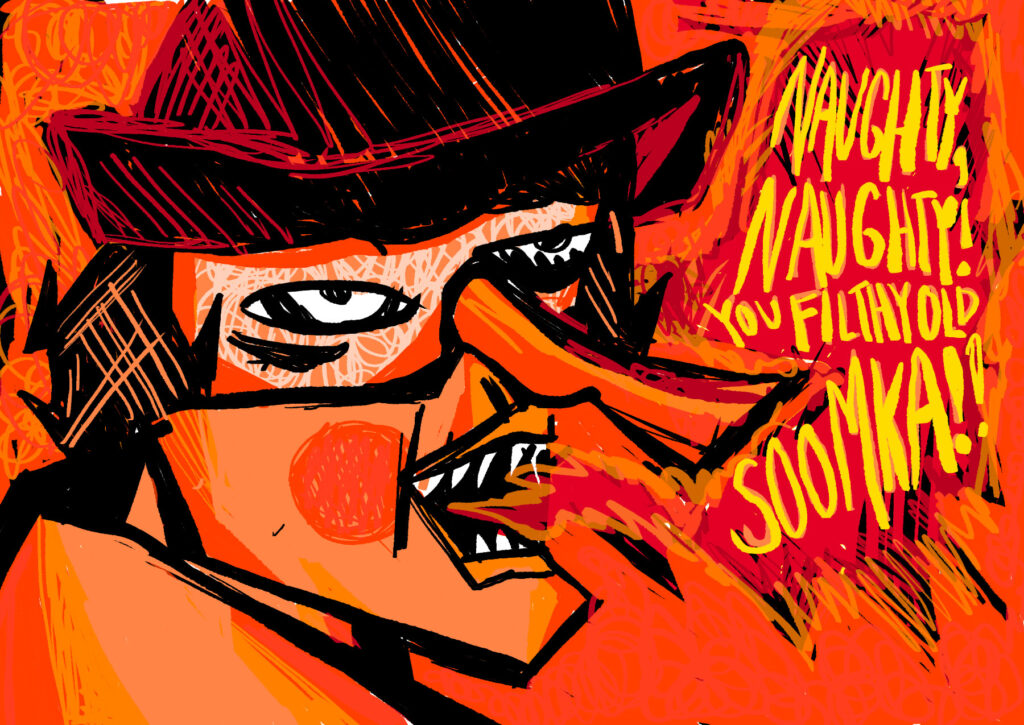 “Old hag” is OUT. “Old soomka” is IN. The word soomka is another Russian re-spelling. Soomka comes from the word сумка, meaning bag. Get it? HAG is out, BAG is in. You heard it here first, kids. In keeping with the trend of teen-slang, here’s another one to piss off the boomers. Oh, there’s a Karen trying to yell at you about the welcome mat outside your door that reads, Hail Satan? Because It scares her KIDS? Well, just call her an ol’ soomka, and pray she doesn’t call the homeowners association.

Now that you’ve refreshed your Nadsat, head over to Riot Fest At The Movies tonight at 10:00 p.m. tonight to catch A Clockwork Orange. (We recommend showing up for the 7:30 p.m. screening of The Lost Boys, too—that movie kicks ass.) Tickets are still on sale!

A Clockwork Orange Nadsat Riot Fest At The Movies Slang