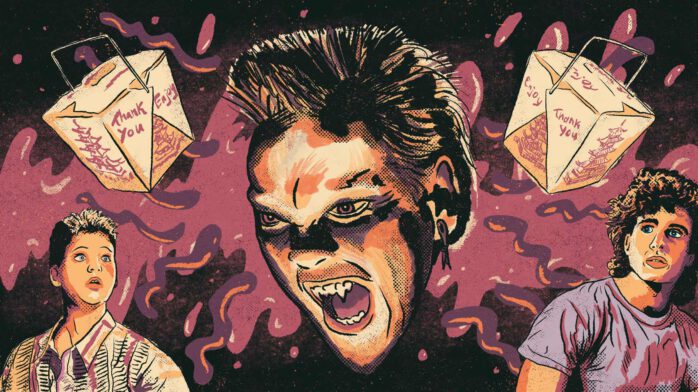 ‘The Lost Boys’ and the Definition of a Cool Vampire

Vampires represent sex and death, and since pretty much the entire concept of cool is built on sex and death, that also makes vampires the coolest. No one (okay, not many people) dreams of becoming a flesh-eating zombie or mutant hill person, but it’s a standard feature of vampire stories that the “bad guys” are so incredibly smooth and seductive that characters basically have to stop other characters from throwing themselves into their arms and embrace certain death just for a chance to look that good in leather pants.

“Vampires are too cool” is, of course, the main theme of The Lost Boys. In fact, the movie doesn’t make any real distinction between “cool” and “vampire” at all—both are one and the same. In the fictional beachside town of Santa Carla, the only signs of big-city style and swagger among the old people and hokey boardwalk attractions are murderous living dead ghouls. And if you want to hang with them, you have to become one too.

There’s also no apparent difference made between “cool” and “evil.” Keifer Sutherland and his gang are unrepentant vampires. They don’t struggle with any guilt over having to murder people for their own survival. They think it’s fun.

The movie’s whole narrative is driven by the “will he or won’t he” tension of Jason Patric and Corey Haim navigating the social terrain of their new hometown and all its temptations. Choosing between the safe way and the fun way is a story as old as time, and has been a Hollywood staple since at least as far back as Reefer Madness, but the “cool = vampire” equation cranks the moral risks to a screaming volume. Will the boys opt for a safely square life of family and small-town existence? Or will they give in to the temptations “being cool” and wind up as actual soulless bloodsucking monsters?

The Lost Boys is a movie that’s completely obsessed with cool, while also being deeply suspicious of the very concept. Corey Haim spends the whole film watching Jason Patric sullenly make one bad decision after another. Patric’s Michael, the film’s supposed lead, is kind of a chump—weak-willed and easily susceptible to peer pressure, obsessed with the approval of people who clearly don’t care about him. Meanwhile the dorky little brother, Haim, saves the day by being a dorky little goody-two-shoes who can’t stop poking his nose into other people’s business.

The “wholesome, rule-following hero saves undisciplined cool-chasers” is a plot line straight out of the Eisenhower era, which played well in 1986 when it was released. Reagan’s America was a reaction to the cultural domination of hippies that never outgrew their teenage obsession with being cool, a bunch of Peter Pan-style Lost Boys who refused to ever fully grow up even when they became rich and powerful. In The Lost Boys, and 80s America in general, it’s people who try to fit a particular uniform of outlaw cool to impress others who are losers; It’s people who loudly support corny, conformist white-bread values who are the “real” rebels.

But of course, we wouldn’t still be watching The Lost Boys if the bad guys weren’t really fucking cool. David and the gang sometimes channel schlocky second-tier Vincent Price—”You’re eating maggots, Michael”—but there’s a core of Cold War nihilism that’s directly descended from screen rebels like Marlon Brando and James Dean. And costume designer Susan Becker, who also worked on True Romance and the cult favorite Girlfriends, absolutely nails the vibe of L.A. punk at the moment where the goth style imported from London’s Batcave collided with the local psychedelic revival, somewhere around midway between the Gun Club and Jane’s Addiction.

And of course, the bad guys’ music taste is legendary. The Lost Boys was ahead of the curve in terms of how seriously it took its soundtrack. This being a Joel Schumacher joint, the selections aren’t exactly underground, but the ironic placement of hippie-era bands like the Young Rascals and the Doors in darkly ur-80s context was a definite precursor to Tarantino’s crate-digging soundtracks. Even the more straightforward radio-friendly cuts are at least dark enough to help point the way towards the goth-ier sounds an enterprising record geek could dig up at the local record store.

Which is essentially what The Lost Boys has been doing for the past 34 years: setting generations of young viewers down the path towards not just goth culture, but an exit from the stifling normalcy of places like Santa Carla. The heroes of the Lost Boys may be the dorks who resisted the vampires’ charms and used their obsessive comic book geekery to save a small town from slaughter, but the movie stays with Michael, the one who’s all too ready to join the side of evil, because we know that if we were in his shoes we’d do the same thing.

You can go see The Lost Boys with us this weekend at Riot Fest At The Movies on September 12 at the Chicago Drive-In. Tickets are still on sale—grab yours now and don’t miss a bloodsuckin’ second of action.