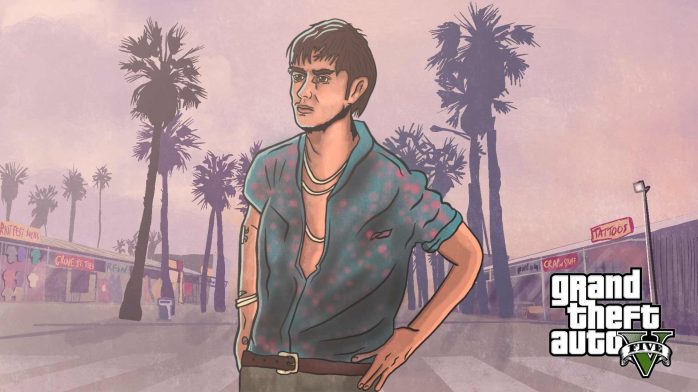 Grand Theft Auto has come to be known for a couple of things: deadly missions, heists, fist fights, drug lords, lots of guns, and all sorts of petty crimes. But arguably the most classic pastime in a Grand Theft Auto game is the simple pleasure of carjacking (in other words, literal grand theft auto). Picking a car you like, ripping another person out of it, taking off and speeding into the sunset is a key experience found in every iteration of GTA—and what makes it that much more exceptional is the soundtrack often found on the radio when driving said stolen car.

Rockstar’s Grand Theft Auto series has had some pretty iconic tunes inside the various radio stations found in-game: Mobb Deep, LCD Soundsystem, and The Smashing Pumpkins are just a few. I can vividly remember stealing a sleek, bright blue convertible in Grand Theft Auto: Vice City, “Billy Jean” immediately blaring through the virtual stereo as I drove around aimlessly. The sound of the game is such a necessary part of the overall mood of it—and for the most recent update to Grand Theft Auto Online (the online add-on for Grand Theft Auto V launched in 2013), the mood has been set by none other than Julian Casablancas.

Featuring guest appearances from David Cross and Mac DeMarco, Casablancas has curated an entire radio station—K.U.L.T. 99.2 FM, a play on Casablancas’ own indie record label, Cult Records—for The Cayo Perico Heist, which adds a huge island to the game’s map. It offers not only an excellent blend of genres and artists, but a brand new song by The Voidz made specifically for the game. This was one of three stations the add-on included—others feature sets and mixes by artists such as Moodymann and Flying Lotus.

Aptly titled “Alien Crime Lord,” The Voidz have stated of the track: “We wanted to make a song that sounded like Jean Claude Van Damme standing up on a speeding motorcycle while firing perfect bullets through the windshield of an oncoming nemesis, then finishing the job with a controlled flip over the top of the vehicle that ends in a maelstrom of denim and flames”. So, the quintessential GTA song—and it worked.

The entire mixtape (which you can find alongside other GTA music via Rockstar Games’ Spotify) is exactly 2 hours in length, and is every bit as gritty, energetic, and exciting as the aforementioned single. The overarching mood is an erratic, violent, but equally cool, somewhat romantic, blissful ride—it feels like a playlist one would put on during a long drive, both in real life and in the game. Some heavy hitting songs include “Drab Measure,” an upbeat but aggressive track by the Canadian art punk outfit Crack Cloud, and the upbeat but emotional “Many Tears Ago” by Connie Francis, where the song’s lovesick melancholy and slow delivery by Francis highlight the brute decadence of the content of the game and adds a dreamy contrast to the overall themes of each mission. Other notable tracks include classics like Joy Division’s “She’s Lost Control,” The Stooges’ “Down on the Street,” Misfits’ “TV Casualty,” and a Strokes fan favorite, “Hard To Explain.”

The Voidz, and almost anything Julian Casablancas touches, are a musically vast and varied band—braving into experimental and genre-bending territories while retaining the beautiful, ear-grabbing melodies that have made earlier releases by The Strokes so incredibly enduring. Music of his—especially when flipping between The Voidz and The Strokes—evokes both a nostalgia for the past and a feeling of already being in the future; in many ways, there was no one better suited to curate a playlist for this specific game.

All in all, Casablancas weaves a satisfying and fitting mosaic of sound ranging across genres and time periods, adding immensely to the musical side of Grand Theft Auto V and its online counterpart—a feature many fans of the game hold near and dear as at least one thing guaranteed to accompany them throughout the entire wild ride.