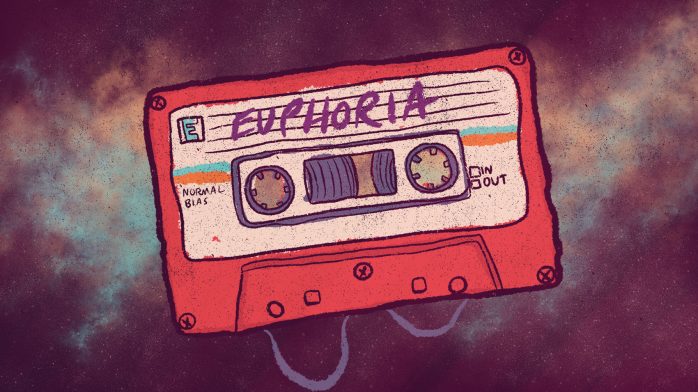 The Soundtrack to ‘Euphoria’ is a Stellar Coming-of-Age Mixtape

When Euphoria creator Sam Levinson came to Timothy Lee McKenzie (better known by his stage name, Labrinth) to sculpt the soundtrack to his show, he already had a concept of what the show should sound like. In one behind the scenes video, Levinson said, “[A]s I was writing Euphoria I kept hearing Danny Elfman meets YEEZUS meets gospel.” In another interview, Labrinth also listed Depeche Mode, and specifically Elfman’s Edward Scissorhands as sonic inspirations for the show. The creators hoped the music would reflect the journeys of the characters and underline the themes of the episodes, and that it would resonate with contemporary viewers in a unique way. Levinson and his team of music coordinators crafted playlists for each episode and character. These playlists and Labrinth’s compositions play a key role in setting the tone and building the tension that drives Euphoria forward, and won its star, Zendaya, an Emmy.

Euphoria’s first season uses music to create a mixtape that captures the rocky waters of the coming of age experiences through which the characters attempt to navigate. He succeeds in embedding the characters into the music, creating more than an overscore, but another sensory layer of emotion. Rue (Zendaya) served as Labrinth’s first inspiration for a character’s song in episode one with the song “When I RIP”, which sets out to express the sensation of being high, both lyrically and sonically.

Episodes such as “Shook Ones Pt. II” prove the show’s ability to plant emotion in the stomach of the viewer. In this carnival episode, Labrinth’s “Euphoria’s Funfair” mimics the unsteadying sensation of the rides, but also that of the relationships between the characters. The bouncing strings subtly stir excitement, while the echoing percussion foreshadows the menace of what’s to berevealed in the episode’s finale.

Then there’s the haunting and thrilling “Still Don’t Know My Name”— another song written for the show— which re-emerges within multiple episodes to capture the characters varying experiences of varying characters. Kat’s (Barbie Ferreira) internet persona vs. how she conducts herself at school, Rue’s insecurities about Jules’s (Hunter Schafer) feelings for her, and Jules’s romance with someone fabricated by antagonist Nate Jacobs (Jacob Elordi). The reverberating instrumentals behind Labrinth’s voice in “Still Don’t Know My Name” effectively communicates the characters’ longing.The breathy yet elevated background vocals incorporate the gospel influence for which Levinson hoped, making the song even more noteworthy. After its release via Euphoria episode, it received trending attention on TikTok.

The show also utilizes previously heard tracks to convey the character’s experiences. In the season one finale, viewers accompany the characters to the high school dance, but also gain access to flashbacks in which Cassie (Sydney Sweeney) endures a harrowing doctor’s appointment. For the span of these scenes, tension builds in the moments that lack music. The boppy, rhythmic music of the dance is juxtaposed with the clinical quiet of Cassie’s procedure. When she puts in headphones, the audience meets her in her mind’s eye, and Arcade Fire’s “My Body is a Cage” articulates the divide between her mind and body for the span of the song.

The music rises in moments of intensity, such as in the last few minutes of the episode and the season. Labrinth draws from Rue’s heightened emotional state to produce “All for Us,” which fully realizes the gospel influences to which Levinson aspired (and which features Zendaya’s vocals). The choir is present both on screen for the finale as well as within the track. The voices of Labrinth and the choral singers mixes with a Kanye-esque synth just before Zendaya’s voice enters. The song reflects Rue’s pain in being abandoned by the woman she loves, as well as the relief and elation in her relapse by emphasizing both the low registers of Labrinth’s voice and the rise of Zendaya’s. Again the scene takes place inside a character’s head. The chaotic dance number causes an unsettling feeling. It begins as Rue thrashes against a wall, knocks objects over, and falls to the ground while cast in neon. The choir emerges to physically uplift her when she stumbles outside. The choppy motions of the singer’s synched choreography maintains the sense that something has been unleashed. The scene beckons the viewer into Rue’s head and heart spaces. This is where the first season comes to a close, amidst the beauty and awe of the song.

The special episodes of Euphoria that premiered earlier this year remind viewers not only of television’s ability to depict authentic struggles and pain, but of the power of music in creating tangible pathos. Rather than attempt to further develop the plot lines of each and every character, or act as a placeholder for season two, the special episodes devote space to the struggles of just two characters: Rue and Jules.

The song selection in the specials are as careful and limited as the episodes themselves. With so few tracks at work, the ones that do play are afforded more weight and significance. Only four songs make up the hour “Euphoria Special Part 1: Rue” or “Trouble Don’t Always Last”, but those four are potent and intentional. The special opens on a new scene between Rue and Jules, but otherwise consists of a conversation between Rue and her sponsor, Ali. By entering the episode with Labrinth’s “All for Us”, the creators remind the viewer of where Rue left off, back in the throes of her addiction. Labrinth’s melodic, “I’ve Never Felt Alone”, which immediately follows the echoes of “All for Us”, speaks to the nuance of Rue’s relationship with Jules. The juxtaposition of the sentiment of loneliness captured by the first song and the collective vocal nature of the second reminds the viewer that though Rue has friends who love her, she is alone in her addiction. When Ali steps out of that conversation halfway through the episode, Moses Sumney’s “Me in 20 Years” foils the sentiments that Rue has expressed about her own life. While the speaker in the song looks forward to the future, Rue believes that she will not “be around that much longer.” This juxtaposition is coupled with Ali’s phone conversation outside, which contains both tangible awe and unspoken regret. The choice of song might even indicate that Rue sees Ali’s relationships with his loved ones as a prophecy for her own future. “Ave Maria,” performed by Labrinth, soundtracks the final moments of the episode. The song reinforces Ali’s assertion of faith in Rue, but simultaneously maintains the mood of longing and near despair one might sense in Rue as the episode closes on her face through a rain splattered windshield.

“Euphoria Special Part 2: Jules” or “F*ck Anyone Who’s Not a Sea Blob” turns its attention to Jules. Like Rue’s episode, most of Jules’s consists of a conversation between Jules and her confidant. Part two opens with Lorde’s “Liability” — giving Jules a theme in the way part one affirmed the connection of “All for Us” to Rue. The entire track spins as scenes from the first season play out in the reflection of Jules’s eye— loving and sweet moments with Rue, as well as painful and near violent ones with Nate. The montage strikes home not only because it carries on for the full length of the song, but because it literally occurs in the eye of Jules.

The songs that follow within the episode maintain the complexity established by the first. Billie Eilish and Rosalía’s “Lo Vas A Olvidar” portrays Jules’s longing for Rue, and her heartbreak associated with her mom. The ethereal quality of the song resonates with Jules’s fear that Rue, too, will break her heart. Music is used only for flashbacks. The luring flutes and the operatic vocals color one memory of a phone conversation with Nate’s created persona. The song, “Van den Budenmayer: Concerto en mi mineur”– which is borrowed from the French drama The Double Life of Veronique– colors the memory in a sense of unease, which is informed by the knowledge Jules has gained over the course of the first season. These tracks allow the viewer to sink into the emotions of the episode. Part two also reveals pieces of Jules’s relationship and past with her mother, who struggles with an addiction not unlike Rue’s.

Like Part 1, Part 2 concludes on a shot through the rain. The viewer leaves the character’s point of view in favor of a moment of near omniscience: through a window. Flute music rises as the shot retracts, moving further from the window. Once again, the final notes of the show leave the viewer with a melancholic sensation, but still leave room for hope.

Euphoria effectively captures the reality of living with mental illness. Furthermore, it reminds adult viewers of the emotional highs and lows of the teenage years. The music made for the show achieves its creators’ aspirations by combining synths that recall those of Kanye, chilling choral vocals, and Labrinth’s melodic voice. The pathos of the soundtrack demands the attention of the viewer and captures the emotional ascensions and dives of the characters. Sensations of sadness and elation in the characters embeds in the tracks to which the scenes are set. Gut wrenching and I daresay unforgettable, the music of Euphoria adds nuance and poetry to the storylines of the characters.