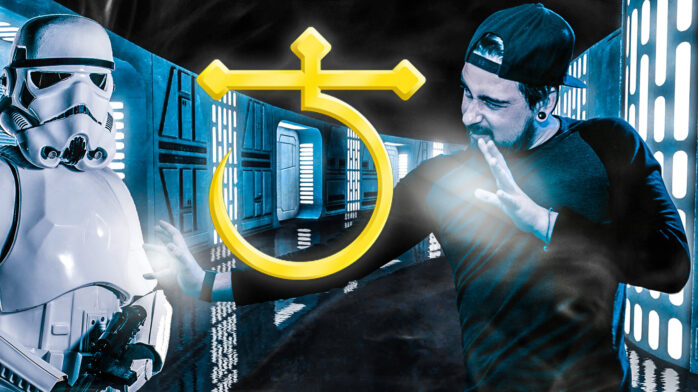 The Guy Who Started the Church of Jediism, Interview We Did

Church of Jediism leader Daniel M. Jones is focusing on the positive. The 32-year-old Holyhead, Wales native co-founded the Church with his brother (who has since left) in 2007 with the endgame of “creat[ing] a New World in which there is no discrimination, no violence, no cruelty, and no poverty.”

With membership purportedly eclipsing 500,000 members worldwide, Jones — who has been diagnosed with Asperger syndrome — certainly has an audience for his book, last November’s Become the Force: 9 Lessons on How to Live as a Jediist Master,  in which “each of the nine chapters concentrates on an area where Daniel experienced a profound lesson, followed by important Jediist teachings and practical living guidelines designed to empower the mind, body and soul.”

Solo may well be the first Star Wars film that doesn’t have any Jedi elements. Does that make it any less exciting for you?

That’s a good point, but I feel like the Jedi are about 70 percent of Star Wars anyway, the rest of the time you’re seeing space hustle, pirates and all the political nonsense… and I think all that stuff is really important to the integrity of the story of Star Wars. So, it doesn’t really bother me. I found that with Rogue One. You wonder whose idea it was to commission the Death Star, and how they built it. Then you see all that stuff, and I think it’s cool… so I’m not worried about it at all. I think it’s going to be really cool.

Last year, the Church of Jediism celebrated its 10-year anniversary. What aspirations do you have for the next 10 years?

[laughs] Look, the first 10 years were a whirlwind. I went from being absolutely nobody, trying to get this idea off the ground, to being featured on every radio and TV station you can think of, and in countless newspapers and tabloids, all around the world; having a book out in three different languages, hosting events… it’s just nuts. From growing up with nothing to creating this huge magnet of popularity for Jedis all across the world — I think that’s kind of triumphant.

So, my aspiration for this year is have a less hectic time. The more organized I am, the better it will be. I would like to get another book out with different content. Then I’d also like to have meet-ups and more events. We did a couple events this year and they was really, really fun. It’s always exciting, and ever-changing.

With the release of Become the Force last year and various paid training courses available on your site, I would imagine this is your full-time occupation.

I’m a bit of an odd person. [laughs] I do a lot of things, but this is partially my full-time occupation. The Church of Jediism takes up a lot of my time. Then I have the book, for which I’m doing a promotional tour; I also do a lot with YouTube, where I’m an award-winning content creator.

What were your career ambitions prior to founding the Church at age 20?

I wanted to be a scientist when I was growing up, but my learning potential hadn’t been achieved in school because they didn’t know how to educate people with autism back then. Then I thought about music, and realized that I can play any instrument you give me. I was teaching myself to play a violin just today, so I can play that now. Everybody in my band is like that. So, I was like, “This is it. This is what I’m gonna do. I’m gonna change the world of music.” I always wanted to help change the world. I love the message you can portray with music, because music entertains and also moves people emotionally.

Then, founding the Church gave me another kind of avenue to go down where I could actually talk to people on an intimate level about something that’d interest them.

I wanted to be a scientist and musician. Now I’m both, as well as a philosopher, and anything else you want to call me. Change comes around full circle; I think life just does that to people.

The concept of Jediism appears to have entered the public consciousness following the census phenomenon (a 2001 grassroots movement that urged practitioners of the Force to list their religion as “Jedi” or “Jedi Knight” on their national census forms). Do you have a relationship with other Jediism practitioners like the Temple of the Jedi Order?

There are a bunch of other ones on the internet, and we have an affiliation with every one of them except the Temple of the Jedi Order. The reason being is [sighs], for some reason its founder, John Henry Phelan, has some kind of beef with us. I have no idea why. A lot of his followers don’t agree with it, and have defected to our website and registered here. It’s very childish and bizarre.

Regardless of that, I’m not gonna dwell on it, because I always tell John that if he ever wants to come and hang out and work together, the offer is always there. He never picks up on me, though. Instead, he puts all this slander about me on the internet and tries to downplay what I do, saying that I’m an idiot. He compared me to Donald Trump once, which was the biggest insult in the world, because I can’t stand Donald Trump.

That’s unfortunate. It seems like so much of the foundation of the religion is positivity.

Absolutely. Look, I worry for John, because if he’s acting like this, there’s obviously something wrong. Nobody’s acts that way just because they feel like it. Things happen to people, their lives change, and they get into, emotional distress, and then it reflects on their reality. That’s what we all are: Reflections, and we reflect everything that we are. So, if you surround yourself with happy people and you have a happy environment, you’re a happy, positive person; but if your environment is falling apart, then there’s something that needs to change internally.

This is one of the teachings: You project your own reality — which is a very typical Buddhist/Zen kind of idea. With John Phelan, I feel like there’s something he needs help with, and I’m always here if he wants it. Like I said, nothing against the guy. I just wish he would kind of come around a bit.

[I’m] very, very interconnected with the other folks. Alethea Thompson from the Jedi Realist Foundation, Opie McCloud — he did a movie called American Jedi and has a radio show called Jedi Living — is a really good friend of mine. They’re all lovely, some of the best people you’ll ever meet.

Each successive film adds something new to official Star Wars canon. You founded the Church well after The Phantom Menace, but how did that movie’s incorporation of midichlorians as a biophysical explanation for the Force affect your overall philosophy?

We wondered how could we relate midichlorians to reality: Is it a biological thing? Is it a psychosomatic thing? We tried to get an explanation for it so we could have a relativity between us and the films, but you can’t really do it, unfortunately.

Our idea is that everybody has the ability to become a Jedi master, and Midichlorians would exclude certain people. We couldn’t force it into reality, so we just left them out. [laughs]

Is Chirrut Imwe’s mantra in Rogue One (“I am one with the Force and the Force is with me”) something more relatable that can be worked into Church doctrine?

Yeah, that is absolutely right. That rings really, really true. The new movies have definitely helped to back up what I’ve been saying for a while. Obviously, we’ve had Episodes I-VI, where the Jedi comprise only percent of what the movies consist of. We’ve only gotten little clips of the Jedi in those movies. Since there’s not a full Jedi movie, we’ve been having to try and fill those gaps in, and it’s a bit of a guessing game.

Now that new [Disney] movies have come out, you kind of see that we were on the right track with these kinds of predictions, and I think that’s really cool.

One of Star Wars fans’ favorite pastimes is debating the series’ continuity and consistency. How much thought do you give to, say, if Luke were to strike down the Emperor in anger in Return of the Jedi, that would cement his place in the dark side, whereas in The Phantom Menace, Obi-Wan does the same to Darth Maul after Qui-Gon’s death and suffers no obvious consequences?

Well, I feel like every franchise has the right to put out inconsistent data. You see this with Star Trek — the Klingons change, the story of the Vulcans changes. I think when you’re dealing with a franchise of fantasy like Star Wars, you have to suspend disbelief at times… But in reality, you ask yourself, “What is the principle of it?”

What is a real-world example of the dark side of the Force at work?

Well, this is highly controversial, so I have to be careful with it: There are definitely dark forces at bay every single day, and they’re winning overwhelmingly at the moment… and you can see this within everything. It’s geo-economical, it’s political, it’s educational, it’s in your food, it’s medical — it’s everywhere, man. People call it the devil, or the Illuminati, but it doesn’t matter what you want to call it. It’s there, you know?

For example, a McDonald’s cheeseburger, which is loaded with carcinogenic chemicals and the worst quality meat, is about two dollars, while a bag of organic vegetables will costs 15 or 20 dollars for less than a kilo. That is a real-life reflection of the dark forces at play here. You ask yourself “What’s going on here?” and you see what’s happening, but until you analyze it, you won’t really know what’s going on.

Have you ever had to communicate with Lucasfilm or Disney about trademarked material?

We never had any direct conversation with Lucasfilm before they were bought by Disney in 2012. We’ve since had connections with them, and they don’t much care for it. They brush it aside, but not after sharing legal guidelines with us. I think what they’re probably saying is, “Hey, if this guy turns a profit of, like, six billion dollars…” [laughs] Since it’s not about profit, I think we’re in the clear.

Are the other guys in Straight Jacket Legends members of the Church of Jediism?

Yeah, all of them are.

Has your notoriety as the co-founder of the Church helped or hindered the band in any way?

I give the band some kind of spotlight, so whenever I do interviews with anything music-related, I say, “Hey, I’m in this pop-punk band,” and they go, “Oh, that’s cool,” and they want to talk about it. It does help, I guess. It does shed some light on the fact that I do music.

One thing I find quite interesting is that while you have plenty of Christian rock bands, I feel like we’re the only Jedi rock band, which is freaking cool. We’re really good friends with MC Lars and MC Frontalot; in fact, we did a song with MC Lars recently. You’ve got nerdcore, and then there’s super nerdcore, but this is Jedi core!