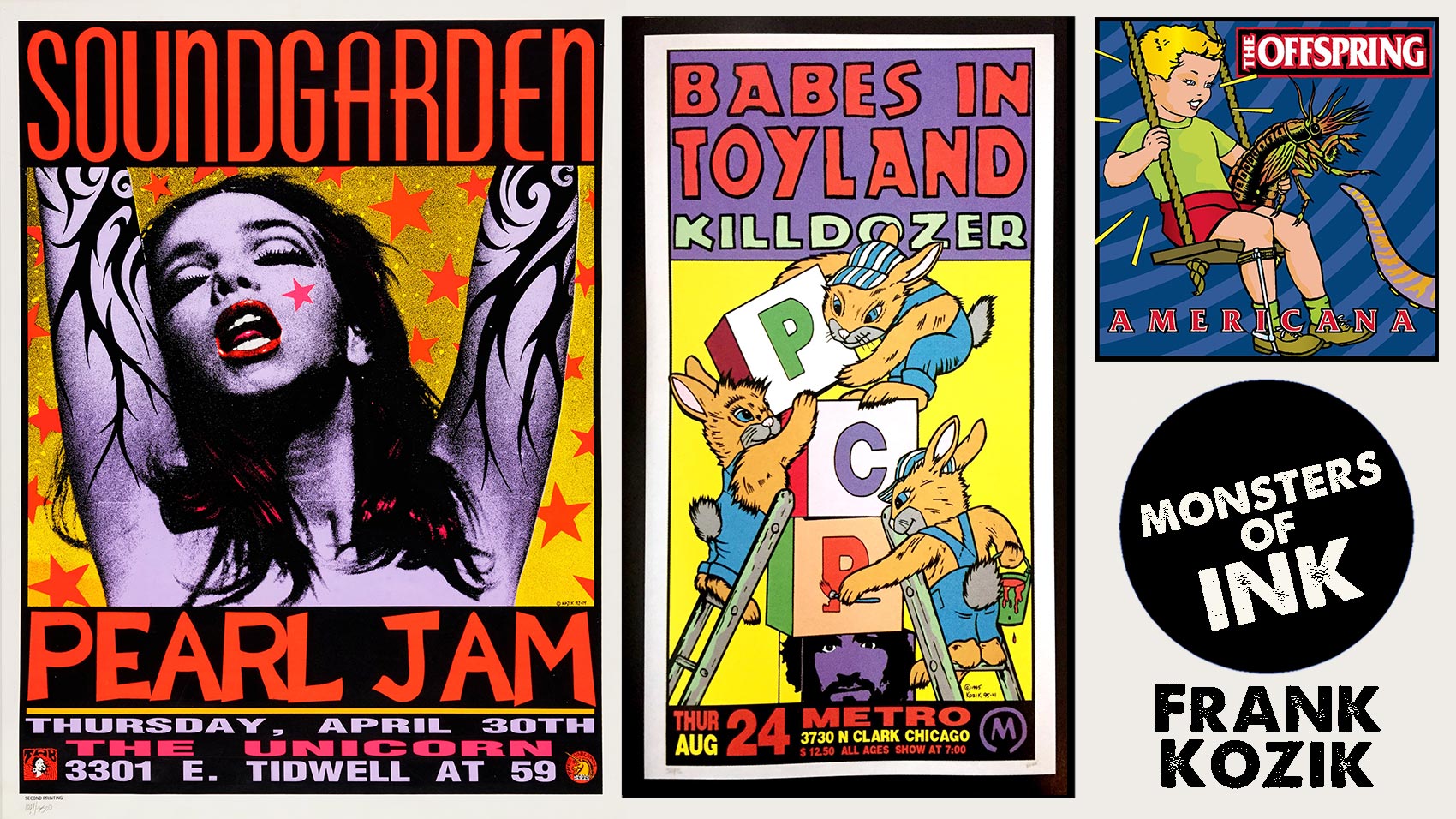 FRANK KOZIK…
started making fliers for punk shows in Austin, Texas in the early 1980s, after cutting his teeth in the then-flourishing mail art underground. Around the same time that alternative music first started creeping into the mainstream, Kozik got his first regular access to a full-service screen printing rig… and his work became exponentially bigger, bolder, and more willfully garish as a result. His posters from that time depicted American pop culture through a filthy-ass carnival funhouse mirror, attacking the senses with gross washes of fluorescent color and cute cartoon characters doing horrible things. Kozik would also go on to design album covers for the Melvins, the Offspring, and Queens of the Stone Age; the latter’s first single was even released by his own Man’s Ruin label, itself the stuff of skeez-rock legend.

Around the turn of the century, Kozik all but stepped away from rock ‘n’ roll to focus on designing toys, for Kidrobot and many others. Still, we’ll always remember him first and foremost as the poster artist whose work always creeped us out in countless subtle ways, most of which we’re still trying to unpack two decades later.

Which came first: art or rock ‘n’ roll?
FRANK KOZIK: I hesitate to call it art, but I’ve been drawing crap since I was a kid. I was going to see shows and stuff, but my first efforts were in mail art (a thing from back in the day that nobody knows anymore, where collectives and artists would send weird shit back and forth in the mail). I got involved with some of those people; there was a group out of Portland back then called The Art Maggots, and they had ties to the Throbbing Gristle people and all that, and we’d hang out and draw, collage weird crap, and send it around. Then, we started making xeroxes of that stuff and putting it around town, weird posters and things. We did a calendar that was peddled around at the local record stores. Some local bands saw some of this stuff, and started to ask us to do fliers.

Why so fucked up?
I have a dark sense of humor. My stuff has gotten nicer as time has gone by, because I’ve grown to have a great, enjoyable life. But I was a frustrated, fucked-up nerd/punk rock loser person, and got really entranced by the empowerment that this kind of industrial RE/Search vibe gave you, that whole thing of sort of hating on everybody. That worked itself into my work. I’m also a big fan of ambiguity, so I think where my stuff resonated was in that I was able to step outside that box a little, and instead of being persistently negative, I was able to turn it on its head a little bit, to make fun of itself. I hit on a formula early where, if it was a massively evil band, I’ll do something that’s insanely cute, and that’d make it weird. Conversely, if it’s something more normal, I’d insert some secret dark element. That was always for personal amusement, but it turned out that if I thought it was interesting, so did X amount of other people.

There was this artist around back then who’d just put a big cock on every poster. So yeah, you’d get your shock value, there’s a big cock there, then the story’s over. I’m more into inferring that a big cock had just been in the scene somehow. Then people would make up their own story, and get into looking at it all the time because they’d put their own thing into the visual. I’ve screwed around a lot with that, portraying a subject just after or before something weird happens.

For the love of trash…
I was part of the trash world. I was a no-education loser person, and was definitely into hedonistic experiences. While I have an appreciation of fine art and I understand it, I was going to punk rock shows, not college nor museums. All of the stuff that really turned my crank was that stuff, and it was all stuff that we could kind of reproduce in our own lives; we could get a shitty car and drive around real fast, and we could hang out with fun people and party… and a lot of that stuff is really visually arresting. It’s all power imagery, and it really gets basic impulses across: sex, drugs, violence, weird shit.

Normal stuff was really bland in the late-70s to early-80s: Yuppies and fern bars and shit like that, so going to the flea market or the used bookstore and finding old pulp magazines and trashy shit like that from the past was really exciting. We all mined those things, because back then it was really hard to find. Back in the 80s in particular, we were trying to be super weird, and it worked because we were just a bunch of idiots in Texas and it was all novel. Now, reality is weird. CBS made Hannibal, the most insane thing ever, and it was just a regular television show. So, that thing is kind of over. It was a golden age of exploring pop culture debris for a few years there, I would say from the late-60s to the 80s.

Now, we have a punk rock president, a total insane GG Allin-type running the country. Be careful what you wish for! Punk has informed everything, from low to high, in that everything is now atavistic, and that’s completely normal to the point where punk itself is the least interesting thing ever. It won. That dark side, the hedonism and anti-intellectual, physical component of entertainment, the raw impulse, has completely dominated every aspect of our society. It’s kind of ruined everything, really, in that it’s hard to find interesting stuff anymore.

Where are you now?
In a weird way, my work probably has more reach than ever, it’s just in different genres. I’ve been working with toys for awhile. If I were starting out today as a poster artist, it would be nearly impossible, just because the internet and digital technology make it so easy. Back in the day, there were like 50-100 people who were really able to do it and make a half-assed living. Now, it’s just endless… there’s always someone willing to do kind of the same thing for a little bit less, so unless you’ve already established a name, getting paid is gonna be fuckin’ hard.

Even in the 90s poster scene, I was an outsider. I was involved, but I had another life, so I was able to step out of the music ghetto a little bit. To be honest, about 15 years ago I made a point to stop even referring to my old stuff; I only do it when people ask me. Those days were fuckin’ fun, they were great, and they set me on a great trajectory, but it was only part — I’m gonna sound like a hippie here — of the journey for me. I don’t do a lot of looking back. I don’t even have any of that stuff anymore, I sold it all.