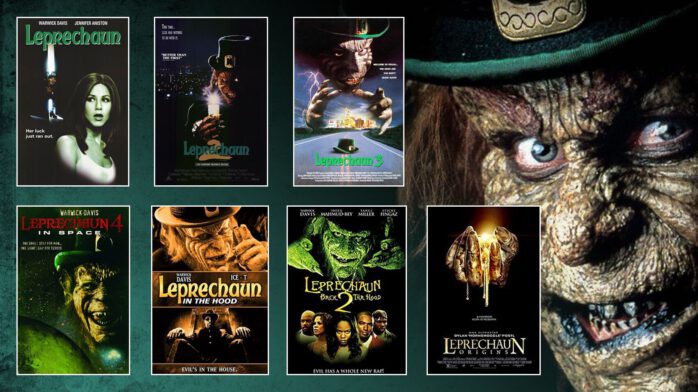 We Ranked The Seven Movies In The ‘Leprechaun’ Film Series

For those who aren’t familiar with the Leprechaun film series, it began with 1993’s Leprechaun in which a malevolent and murderous leprechaun tries to reclaim his stolen gold by killing a shit ton of people. This was followed by five sequels and a remake. All but the final film stars Warwick Davis as the leprechaun. You might also know him from such roles a Willow in the movie Willow, and Wicket in Return of the Jedi.

So yeah, they made seven of these movies. You can check out the rankings below:

7. Leprechaun 4: In Space (1997)
Maybe it’s because I’m not a huge sci-fi person or it was just too over the top (is that a even thing in this franchise?). Either way, space plus leprechaun equals… scratch that, any horror movie character plus space equals no.

6. Leprechaun: Origins (2014)
I’m generally a huge fan of origin films, but this one just didn’t cut it for me. While I missed Warwick Davis, the real issues are that the film lacks laughs and, most importantly, a leprechaun. Here’s one of the only attack scenes… Enjoy!

5. Leprechaun: Back 2 tha Hood (2003)
So sad… This was the last Warwick appearance in the franchise. Though he did not disappoint with a solid performance, the film just followed the same old story line: A group of friends in the ghetto find gold, get greedy, spend it all, and a killer leprechaun comes after them for revenge. Note to self, don’t want the Leprechaun to murder you? Get him really, really high.

4. Leprechaun 3 (1995)
I’m surprised it took the Leprechaun three whole films to realize how much fun he could have in Sin City. This movie may not top my list, but his rhymes are pretty top-notch in this film. Especially, “Didn’t you hear, bigger is good, but jumbo is dear… I’ll give you boobs that come out to here.” He’s quite the bard!

3. Leprechaun 2 (1994)
The Leprechaun falls in love! Yes, this is a love story. The romantic storyline makes for a fun watch, but I’m partial to the scene where the Leprechaun eats a finger and follows it with the witticism, “Finger licking good!”

2. Leprechaun in the Hood (2000)
This is Ice-T’s first foray into the series, so you know it’s not shy of hilarious one-liners. Plus, if you oft-dreamed of seeing a Leprechaun rap to background dancers, it’s time to wake up.

1. Leprechaun (1993)
Two words: pogo stick. I don’t want to spoil for anyone, but any movie where a Leprechaun hops out of a safe, chews on an arm, and pogo sticks on a lung while singing a song is definitely going to top any list of mine.

Leprechaun rankings were sent to us by our friend Lindsay Macdonald who works with CACC and sends us all our amazing Adoptable Puppies of the Week. In addition to being a dog lover, she is also a lover of the Leprechaun film series so she decided to rank them from worst to best.