A green mohawk, a virgin until the age of 25, a population in decline since the 1970s, breathes through its genitals. Yep, this endangered turtle is punk as fuck.

In another instance of humans ruining this planet, the Mary River turtle—able to breath through its cloaca and totally punk as fuck—is now on the endangered species list. 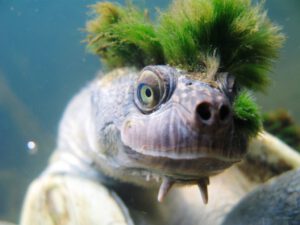 This punk rock turtle sports a green mohawk and spikes on its chin, and is found only on the Mary River in Queensland, Australia. Not only does this turtle look punk as fuck, but the gill-like organ in its cloaca allows it to stay underwater for three days; as a bonus, this multi-purpose organ is also used for mating and pooping.

What else makes the Mary River turtle so punk? It rarely mates before the age of 25 and its population has been in steep decline since the 1970s.

Why is this badass turtle with an algae mohawk and spikes on its chin who just wants to live its life and breath through its dick going extinct?

Because of you. That’s right, you. These kickass turtles were taken from the wild by the thousands because asshole humans wanted to keep them as pets. Now along with pollution and all the other things humans have done to this planet, the Mary River Turtle is in danger of becoming extinct.