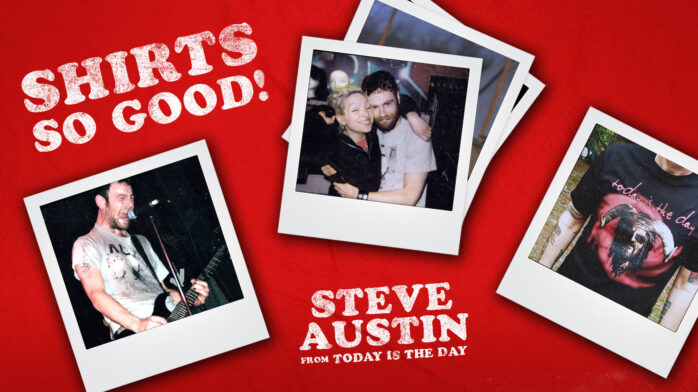 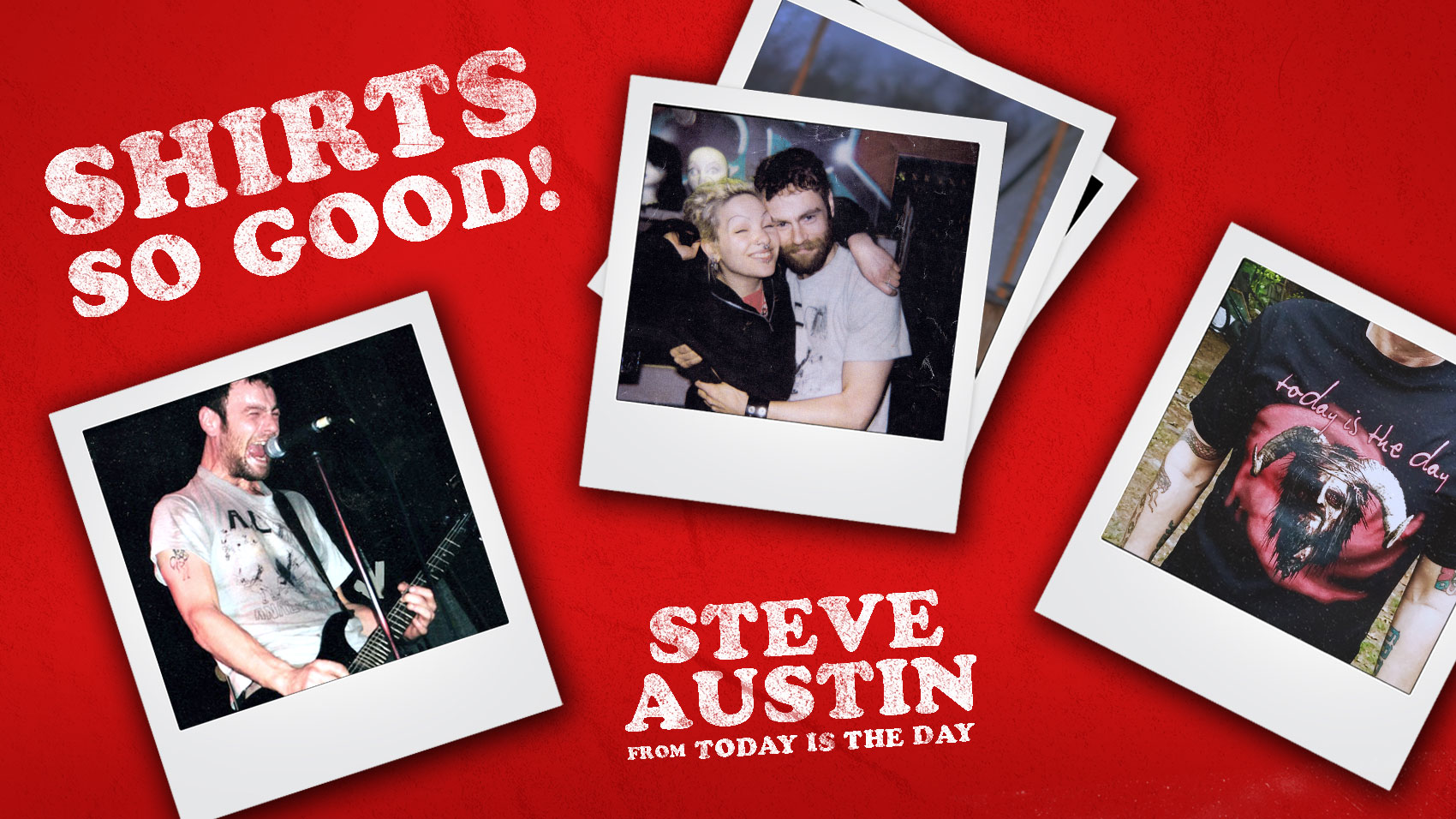 You have a favorite band T-shirt. You know you do. Maybe it’s cheesecloth now, so tattered with holes that it’d be borderline obscene to wear it in public. Maybe you’re one of those people who doesn’t gain or lose weight, and it still fits just like it did in high school. Maybe you see nothing wrong with rocking it five days in a row, from work functions to smoking bars to wedding receptions.

With this new series, Shirts So Good, we explore the lifelong affection that the coolest musicians have for their top-drawer tees.

RIOT FEST: Which A.C. shirt specifically is your favorite? The one depicting the 40 More Reasons to Hate Us cover?

STEVE AUSTIN: It was a gray homemade shirt that Seth did that said Bullfuck Tour 1988: Life Insurance Necessary. He told me he’d only made 11 of them.

Why is/was it your favorite shirt?

After I met my wife Hanna, she gave the shirt to me. It meant everything, and I wore it for like 36 days straight on tour… maybe two tours. I was massively head over heels and crazy in love, and the shirt was symbolic. A.C. was one of my favorite grind bands, and the woman that I’ve spent the last 20 years with happened to have this sick rare shirt that she gave to me.

I’d recorded an album and some 7-inches for Seth and A.C. We both lived in Massachusetts. We’d played shows together, but I really got to know Seth and became his friend after I moved to Massachusetts. After getting to know him, I realized what a true savant genius he was. He was the Lenny Bruce of extreme metal.

He lived in the most pretentious and politically correct area of Massachusetts: Wellesley. He lived in a house that his parents owned that looked like a cross between the Addams Family and Amityville Horror houses. It was a scary-looking old dump smack-dab in the middle of million-dollar homes. Must have been weird growing up poor in a Volvo-driving rich neighborhood.

So, he rebelled against it. He made songs that were offensively humorous, trying to show the absurd nature of extreme political correctness. It went way over most people’s heads, but not mine. Seth had balls, and the music and lyrics of A.C. pushed the limits of extremity. He was a metal punk with a genius mind and hyper imagination… dangerous.

I had a huge amount of respect for him. He was a total mess of a human, seemingly trying to kill himself with drugs and alcohol all the time. He knew he could get his ass kicked for his lyrics, but instead he fearlessly delivered his music and took beatings for it. He was one of a kind. I miss him.

A friend once told me that you accidentally left it at a venue and drove at least a hundred miles back to retrieve it. Tell me that’s true, and please fill in the blanks!

We were playing a storage facility space, and in the middle of jamming “Pinnacle,” I headbanged down onto a broken crash cymbal. There was a big chunk knocked out of it, with a jagged edge, and it stuck into my skull. I had to wrestle it out of the bone in my forehead. Blood went all over me when I pulled it out. It got all over my A.C. shirt. I finished the show and went to a shitty bathroom, took off my shirt and put on another.

Next day, we were riding, and I realized I don’t have my A.C. shirt. We were 120 miles and two hours away. Hanna had given me that shirt, so I said, “Fuck it,” and drove back. The shirt was gone. I dived in the dumpster outside of the bathroom and couldn’t find it. I was broken for life over that fucking shirt.

What’s your favorite Today Is the Day shirt? I’m partial to the Temple of the Morning Star-era short-sleeve with a woman impaled by an axe on the front and THIS LIFE NO LIFE on the back.

In the Eyes of God is probably my favorite. Along with “Wolf/Crow” from the Animal Mother era.

Do you have a favorite T-shirt artist?

Jef Whitehead and Stevie Floyd are my two favorite artists.

Now that you no longer have the A.C. shirt, what’s the current favorite in your rotation?

I think my favorite T-shirt for a while has been my Celtic Frost To Mega Therion, with artwork by H.R. Giger. I love the album, and in general just dig anything that Giger did.

Today is the Day hasn’t released an album since 2014’s Animal Mother, so it’s about time for another.