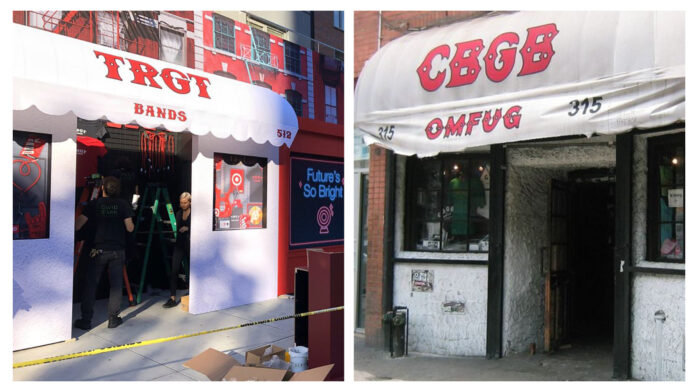 Since selling Ramones swag wasn’t enough, Target recently opened a new location in New York City’s East Village last week, and somebody thought it’d be cool to make the facade look like it would’ve in the late-1970s. It’s not cool.

Of course, where there’s Lower Manhattan nostalgia, there’s a butchering of CBGB’s. In a questionably-guided tribute to the legendary defunct punk rock club—whose name is short for Country, BlueGrass, and Blues, Other Music For Uplifting Gormandizers—Target is now calling itself TRGT, and OMFUG is now BANDS. However, according to our research, the only bands they have at this dive are store-brand Band-Aids and exercise bands… which they were giving away free at the opening. Isn’t that adorable?

Jeremiah Moss says it best in his blog Jeremiah’s Vanishing New York, which documents the decay of Gotham City:

To see the artifacts of my own life—my cultural and spiritual awakening, my home—displayed above the cash registers in a Target store is to be cast into a state of confusion and dystopic dysphoria.

What am I seeing?
Who are these people?
What happened to the world?

What did happen to the world?