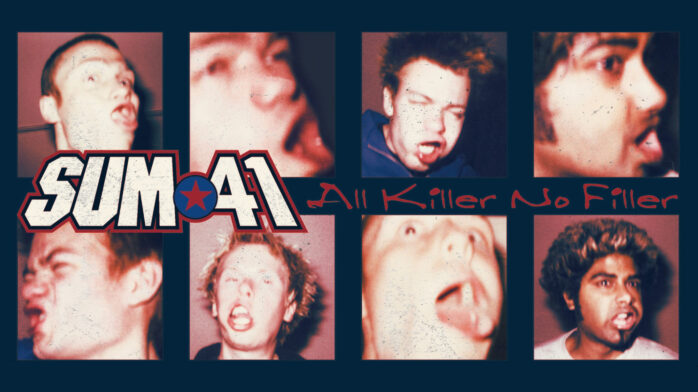 The year 2001 was a charmed time in musical history. Destiny’s Child was still together. Outkast was pleading for Ms. Jackson’s forgiveness. Christina Aguilera, Mýa, Pink, and Lil’ Kim were giving out French lessons with “Lady Marmalade.” Mary J. Blige first perplexed us at to whether she was saying “dancery” or “dance soiree,” and it remains a mystery that listeners debate to this day. Throwing a wrench into all this was Canadian quartet Sum 41.

Hailing from the Avril Lavigne’s home province of Ontario, the band had just hit the mainstream with All Killer No Filler. With a runtime just over thirty minutes, it’s gone down in history as a skate punk classic, thanks to unforgettable songs like “In Too Deep” (‘Cause I’m in too deep / And I’m tryin’ to keep / Up above in my head / Instead of going under) helping the record attain platinum status.

At the time, pop-punk was still in the midst of its early-oughts golden age… which was built upon the legacy of 1990s Bay Area bands and brought us something snottier—and somehow more radio-friendly—than ever. Hugely influential albums like Blink-182’s iconic Take Off Your Pants and Jacket were getting slotted next to Saves the Day, New Found Glory and Alkaline Trio in our zippered CD wallets, lead singers across the nation were adopting Southern California sneers, and every high school boasted its share of students gelling their frosted tips stiff in dedication to their new favorite bands.

Despite all this, pop princesses and troupes of unthreatening hunks with synchronized dance moves ruled the top slots of MTV’s Total Request Live with an iron fist. TRL, as it came to be known, was a hugely successful television program modeled on the 1950s-era American Bandstand. Poodle-skirted Annettes doing the mashed potato to Frankie Lymon were replaced by glitter-covered Jennifers swarming in New York City’s Times Square, while the premise remained the same: bringing young people the Top 40 hits they demanded.

Carson Daly, our generation’s Dick Clark, presided over a daily top ten list, playing clips of the most popular music videos by audience vote interspersed with live performances, celebrity visits, and shots of the screaming hordes outside. During the very first countdown show, the Backstreet Boys’ “I’ll Never Break Your Heart” and ’N Sync’s “Tearin’ Up My Heart” filled the top two slots, thereby setting the formula for the rest of the show’s run.

When videos from outside the bubblegum canon, like Korn’s “Freak on a Leash”—and its 1998-style Matrix-inspired visuals—reached the upper echelon of the countdown, it was considered to be a major upset. For the most part, TRL’s top three slots were a rotating list of pop singles so static that producers introduced a new rule: once a video spent 65 days at number one, it was retired to allow other songs a chance to capture the glory of the brass ring.

Though pop-punk was finding landmark success via radio play and record sales, fans brushing their floppy bangs out of their eyes to request songs were no match for legions of ’N Sync, Britney, and Backstreet Boys fans with their speed dial at the ready… and then, out of nowhere, they got a big ol’ “Fat Lip.”

In contrast to their DIY forebears, who lacked the budget or technology to create and distribute popular music videos, Sum 41 had Island Records, and therefore the resources to create their own early-2000s pop-punk music videos.

“Fat Lip” opens in a convenience store, where the band beatboxes and raps for oddly appreciative clerks. The rest of the video takes place during a Sum 41 concert in a skatepark that any decent concert promoter would shut down due to insurance liability. Inspired by then-popular MTV show reality show Jackass, unsupervised teens sled down hills in Rubbermaid tubs, shave each other’s heads, and skateboard with fireworks in hand.

Producer Jerry Finn, who cut his teeth engineering Green Day’s Dookie and worked with numerous pop-punk bands (such as Blink-182, Alkaline Trio, and the Smoking Popes) during the early-’00s, helped the band discover the power of a poppy hook. Hip-hop influences like DMX helped inspire the rap-rock rhymes the band members trade off. Deryck, Dave, Cone, and Steve-O’s well-documented real life destructive streak was felt in all the performative adolescent mayhem they’d managed to cram into a three minute runtime.

The video clawed its way past Justin Timberlake and Nick Carter, all the way up to TRL‘s number one spot not once, but seven times. Thanks to fan fervor, it became such a chart mainstay that Sum 41 even appeared on show to perform it live.

As a result, MTV expanded their efforts to court pop-punk listeners. Everyone from the Used to Simple Plan to the Donnas graced the TRL stage in the years following the success of “Fat Lip,” proving the top ten show wasn’t the sole bastion of teenyboppers.

Total Request Live would run for over a decade, culminating in a three-hour farewell episode titled Total Finale Live. MTV revived the series last year, with a parade of YouTube stars, musicians, and other celebrities stopping by to help film new episodes. Much like they used to, boy bands and pop starlets dominate the conversation.

If we’ve learned anything from 2001, it’s that Sum 41 doesn’t want to waste anybody’s time, and that pop stars shouldn’t ever get too comfortable.