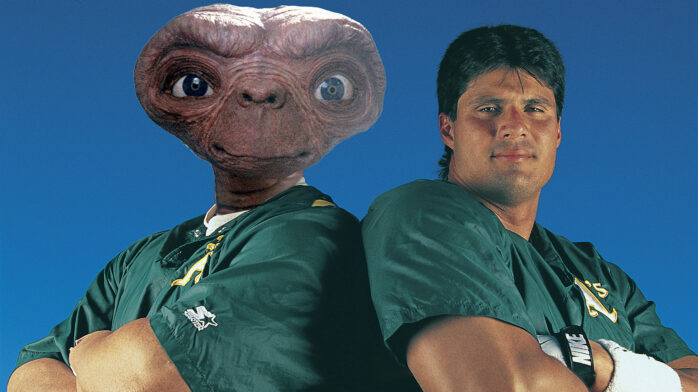 For $5,000, You Can Spend The Weekend With Jose Canseco Searching For Aliens And Bigfoot

The truth is out there, and Jose Canseco want you to come along for the ride. The former MLB home run basher, who was the first player to hit 40 home runs and steal 40 bases in a single season and was at the center of the steroid controversy in the 2000s, has invited anyone who wants to join him to call the number of Morgan Management and go hunting for Bigfoot and aliens.

A message from Canseco’s manager Morgan Strelow says: “Spend the weekend with Jose for $5,000 cash. Only five lucky individuals will get a golden ticket. Oompa Loompas ain’t got nothing on Bigfoot. Travel in his custom RV to authentic alien sightings and proven Bigfoot habitats. Camp out in the wild. Tell stories and maybe meet a real Bigfoot. You never know what’s gonna happen with Mr. Canseco. Food included. Only serious inquiries please. I will help you book your flights to Vegas and set itineraries.”

But don’t worry, “We are squatcher conservationalists. No harm will be done to any Bigfoots.”

We just want to sit out in the desert of Las Vegas in lawn chairs with Jose Canseco and a cooler staring at the stars together.

Is this just some marketing stunt? Probably, even we wrote about it, but he claims you can meet a “real alien“. And if we had $5,000 we would definitely to go alien and Bigfoot hunting with Canseco, who has described himself as an “expert with nunchakus”.

We don’t know if he’s still on the juice, but at the very least we’d get some crazy stories out of it. Like that one time he shot his finger off and then lied about it falling off at a poker tournament.

Winner of the Rookie of the Year Award in 1986, MVP in 1988, World Series Champ in 1989 and 2000, and 4 time Silver Slugger Award, Canseco’s most remembered highlight happened on May 26, 1993, during a game against the Cleveland Indians when Carlos Martínez hit a fly ball that Canseco lost sight of at the warning track, hit him on the head, and bounced over the wall for a home run. And now we have an excuse to show one of the greatest plays of the 1990s.