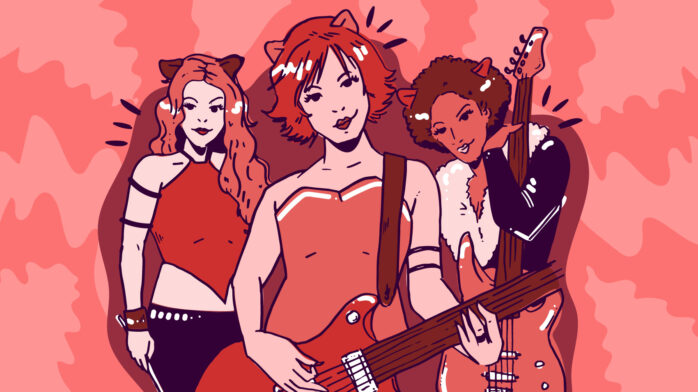 The Lasting Influence of The Fictitious ‘Josie and the Pussycats’ Band

I sort of lived the dream of every elementary schooler: I had a landline in my bedroom. Mind you, it was almost totally non-functional, but it was clear blue and had the ability to record a customizable ringtone, so its mere presence as a set piece in my room was more than enough to make me feel like the second coming of Melissa Joan Hart.

At the time, I was obsessed with Josie and the Pussycats—the 2001 movie starring Rachael Leigh Cook, Tara Reid, and Rosario Dawson—so naturally the phone’s vestigial ringtone had to be a song by the fictional band. I scrubbed through the DVD I’d borrowed from the Cook Memorial Library and recorded snippets of “Spin Around,” “Pretend To Be Nice,” and “3 Small Words,” each then doomed to play in 15 second loops of atrocious, diegetic phone audio for the rest of eternity (at least until I got bored with the phone). It was, in a word, jerkin’. Even though the phone never realized its purpose by receiving a call, the sheer potential of a call announced by Josie was good enough for me.

Of course, it wasn’t actually ‘Josie’—it was Kay Hanley. The Letters to Cleo frontwoman was responsible for the cult classic band, along with a baffling assortment of contributing musicians: Kenneth “Babyface” Edmonds, Adam Duritz, and That Dog’s Anna Waronker to name a few. The movie itself was a poorly-received box office bomb, but the soundtrack was a hit, reaching 16 on the Billboard Soundtrack chart and going gold with over 500,000 copies sold. Howard Stern, per Babyface in The Fader’s 2017 oral history of the soundtrack, even once called it “one of his favorite albums.” The fake band’s infectiousness was widespread, but girls were patient zero; Hanley’s voice, crystal clear with a subtle jaggedness, defined the girl-power pop sound that would come to influence a generation of millennial musicians.

Beyond the array of soundtrack contributors, I personally consider artists like Veruca Salt, Juliana Hatfield, and Tanya Donelly’s Throwing Muses contributions to be proto-Josie and the Pussycats-core. Each share incredible, basically pitch-perfect voices that somehow avoid sounding Disney Princess-y, vocals that slap every note straight in the face. In terms of musical style and theme, Hatfield’s line “a heart that hurts is a heart that works” is a fitting thesis statement for the genre. Over punky, power-pop melodies is a sardonic, weaponized form of girlishness. They crush openly and brazenly, armed with a laser-focused takedown ready for anyone who’s shitty to them. To simplify the genre’s aesthetic to a basic ethos: If you’re a girl, you have to fend for yourself, so you might as well try to have fun doing it.

While the movie was part of a larger influx of female-led power pop in the early 2000s (and probably responsible for Lindsay Lohan’s fake band in the 2003 remake of Freaky Friday), artists like Sadie Dupuis of Speedy Ortiz, Eva Hendricks of Chary Bliss, Mitski, and Emily Reo have cited Josie and the Pussycats as a direct influence on their respective starts in music. Per Mitski, “I studied the way they performed. The little gestures and facial expressions they do in those music videos, how they would rock out. I’d be like, Oh that’s how you do it! That’s how you rock out! That’s how you perform, that’s how you hold a guitar.”

The ‘girls to the front’ ethos of the riot grrrl movement was partially intended so that girls at punk shows could see the exact mechanics of the women playing their instruments on stage; they’d see how easy it was, and hopefully start their own bands. Similarly, Josie and the Pussycats’ mainstream-ification of being in a “girl band” was something of a universal call for ‘girls to the front.’

Though it came a few years after both, Josie and the Pussycats is the bridge between the riot grrrl and Spice Girls brands of “girl power.” It empowered a generation of women to become musicians. It was also just so good and fun—so much that I felt some primal compulsion to not only re-watch the movie on a continuous loop, but also record short snippets of it and listen back to the wildly shitty audio over and over again. I don’t know if there’s an articulate reason for why I love this movie, its music, and the art it’s inspired so much; really, I think it’s just that it’s fun pop music, the kind that makes my heart beat a little faster and makes me wanna dance and run laps around my bedroom like I’m 10 years old. As with so many women my age, Josie and the Pussycats got my little fire going, and it’s never gone out.