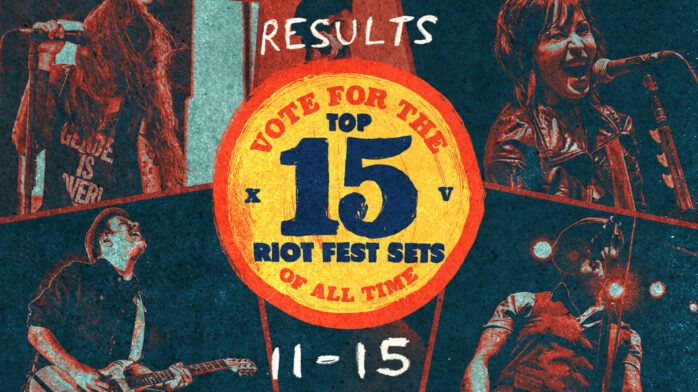 The results are in. For our 15th anniversary, we asked fans to vote for the top 15 Riot Fest sets of all time, and the response was overwhelming. We’ll be sharing the results over the next few days, focusing on five sets at a time until the #1 voted Riot Fest set is revealed.

Each show is paired with a handful of fan testimonials remembering each set—after all, it wouldn’t be Riot Fest without our fans. Read on below, and check back tomorrow for the next five performances.

I was 16 at the time, and I sold my phone so I could buy tickets for Riot to see my favorite band (FOB). It was the first time I was allowed to go to a concert and that night I felt alive.

My #1 Riot Fest set of all time. It’s always great to see a Chicago band and for them to be able to achieve the goal of getting the Stanley Cup to Riot Fest, that was amazing. They put so much heart into their Chicago sets that I still get chills thinking about that show.

I thought they were broken up forever. Seeing them back together was so nostalgic. They played all the classics. How many other Riot Fest bands brought the Stanley Cup with them on stage? They did a great job representing Chicago.

Against Me! it was my first time seeing the band since Laura’s transition, and I made it a point to see them so I could see Laura perform as her true self, singing her truth. Seeing her on that stage, I could tell she was truly happy. It was also my first time hearing the electric version of their then-new song, “Fuckmylife666.” I was proud of the whole band that day, and the crowd was spectacular.

When Laura Jane Grace sang “Black Me Out” I couldn’t stop jumping. It put the entire rest of the weekend at a high. It was the first time I saw them after she came out as trans and their whole set was just a statement inclusivity and acceptance to me.

#1 was definitely Against Me! in 2013. Just as Pints of Guinness was starting, the rain started coming on down a little bit and it was just the most fun and incredible mosh pit of wonderful people smiling and laughing and dancing together, and it was the same afternoon I met one of my now best friends who lives several states away. Just amazing. Can’t wait to see them again this year.

She is an absolute embodiment of a Riot Grrrl. A true rebel who didn’t go away when people tried to make her leave. Her music is rad and her attitude is something to feed off of.

They played one of the smaller stages in the corner early in the chilly evening. It became jammed packed as more and more people gathered. You could you feel the energy of the crowd anticipating the start of the set. The band exploded when they they began their set with the first power chord of “Bad Reputation.” It was non stop excitement, movement, crowd surfing and song chanting there on out, start to finish! Joan, the Blackhearts and the audience were on fire!

Joan Jett is the definition of rock star. I still remember the energy of the tightly-packed crowd as she played “Cherry Bomb.” Her music gets me in the gut. It felt amazing to be a woman in that audience!

Dropkick Murphys music gives us an historical account of where we’re from, a thought provoking look at where we are, and an honest opinion of where we’re headed. And the kids today need the optimism and energy of loud guitars.

Was my first time in a mosh pit. As a female, they always scared the shit out of me. But it was actually one of the best experiences I’ve ever had. A bunch of guys even helped to protect me when my shoe came off. It enforced that the punk community is in it together, looking out for each other.

The Dropkick Murphys in 2012 for sure. I attended the festival that year with my dad, and this was the first time he had seen the Dropkick Murphys perform. Seeing his reaction when they hit the stage was priceless and I will never forget it.

Social Distortion in Chicago 2014. I loved my first Riot Fest, but this was the best moment. I rode the Ferris wheel the whole time and it was badass. They killed it.

Seeing Social Distortion live was a huge thrill. I remember when Tim, a friend, brought Mommy’s Little Monster over when we were in college in the 80s and I couldn’t get enough of it. It opened a whole new genre of music to this day.