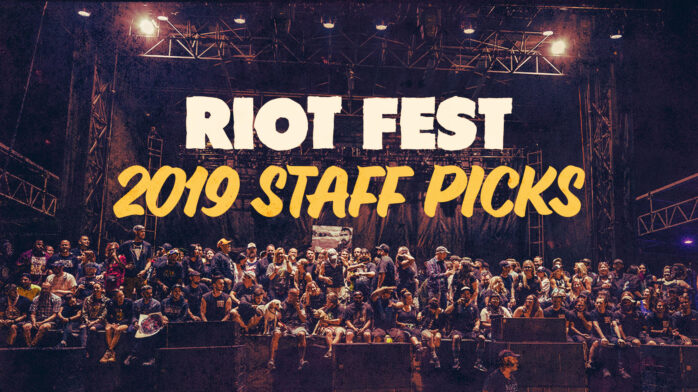 2019 Staff Picks: Who The Heck Should I See at Riot Fest?

With Riot Fest rapidly approaching (is it just us sweating?) comes the time-honored tradition of crafting a day-to-day festival schedule. We asked the Riot Fest staff for their most anticipated performances ahead of the festival to help you plan out your weekend—and, of course, because we genuinely love the artists on our lineup.

Read up, clean up, and be sure see at least one band you’ve never heard of! We’ll see you next weekend.

White Reaper shreds really hard. Their new single, “Real Long Time,” sounds like Thin Lizzy, which is a great thing in 2019. Their most recent album, The World’s Best American Band, is such a fun, nostalgic tribute to all of the best elements of 70s and 80s rock—dueling guitar leads, lyrics about being awesome, going to the beach, girls, and rocking out, plus most of the songs are under 3 minutes for all the ADD kids. If their new singles are any indication, we’re in for a rock ‘n’ roll nostalgia trip of a new album with all the benefits of a major label mixing budget without sacrificing any of the sick guitar solos or attitude. Slick mixes, sick leads. My kind of stuff. I will most likely be wearing their t-shirt by the end of the weekend.

If you’re into teenage anthems that’ll empower you to raise a sword and create a space for yourself, The Beaches might be for you. They hooked me in 2016, after listening to their song “Give It Up” only once. The powerful drums and gritty guitar riffs kept me coming back throughout the years, so I’m pretty stoked to see them on this year’s lineup. They’ve been opening acts for bands like Eagles of Death Metal, Death From Above, and even The Rolling Stones which means their power shouldn’t be underestimated.

So make some time to check ‘em out and don’t underestimate them. Or do, it’s your loss.

The Mollusk is one of my favorite records, so I’ve been riled up for Ween’s set ever since I found out Deaner and Gener would play the record front-to-back. On the surface, it’s a nautical-themed concept album with some choice toilet humor and “Ocean Man,” the one song you definitely know. But dive into the record and you’ll find a stunning trove of songwriting that transcends a single idea. Title track “The Mollusk” sounds like a lullaby for fish. “The Blarney Stone” is the drunken sailor anthem of the century. Rarely performed songs like “It’s Gonna Be (Alright),” performed a mere 6 times live, feels like it’d be a setlist staple for any other band. Not Ween.

You can’t put a label on Ween—the band will never sit still enough. Riot Fest is built around a variety of musical tastes, so it only makes sense to go check out a band that covers all the bases and more. They’ve got a whopping 2-hour set to make room for the jams, the covers, and the deep cuts; for any followers of the mighty Boognish, this is a once-in-a-lifetime set that you can’t miss. But for anyone unfamiliar with the brownest band on the planet, you won’t be disappointed.

When it comes to The HU, you either know or you don’t. (Or you think Roger and Pete are crossing the pond for another reunion show.) If you’re among those who don’t know, The HU is a Mongolian heavy metal band that celebrates its members’ rich history by incorporating traditional lyrics, instruments and throat singing into their musical stylings. All of that translates into some of the most badass shit I’ve laid eyes or ears on in quite some time.

I remember the day the submission came through; we all gathered around Jake’s computer to see what was up. By the end of the video, everyone had shifted from “sure whatever” to “holy shit this is legit.” I am genuinely stoked that they are playing Riot this year and have been telling all my friends it’s gonna be a “can’t miss” set. That includes you, dear reader. Don’t snooze on this one. Get your tush out of bed, shake off your hangover, and come watch some epic Mongolian hunnu rock.

When the summer‘s sun quietly changes to autumn air—with the inevitably of shorter days and coldness fairy approaching— I always find myself finding solitude with one band in particular: Manchester Orchestra. Their music has always been a staple for this annual transition. Whether I’m walking in the park or watching the city streets touched with the first snowfall, I naturally scroll through my phone and find Manchester. Art replicating life, at least in these instances.

From the full album debut of I’m Like A Virgin Losing a Child to the more recent releases, Andy Hull’s voice has remained raw and impactful. Natural and real. And years later, a song like Sleeper 1972 continues to impress chills on people who listen. So while I’m working Riot this year, light a cigarette, grab a 312, and enjoy their set for me.

When I was first discovering punk and learning its basic ground rules, I was confused as to why the B-52s were included in the canon. I thought punk was supposed to be nihilistic and aggressive and at least a little unpleasant to listen to, whereas I knew the B-52s from “Love Shack” and “Roam” and gaudy Technicolor music videos. They were silly and un-self-serious and cartoonishly kid-friendly.

But in the same way as I started to figure out how many cartoons I’d grown up on were a way to secretly plant subversive, anti-establishment messages in the minds of young children, I eventually figured out that the B-52s were (and still are) actually way more revolutionary than the average anarcho-crust band. Nihilism and self-destruction only play into the hands of the greedheads who make up the ruling class. What the B-52s campy, ecstatic eccentricity gives to listeners is something much more dangerous: a few minutes at a time of true liberation.

I know everyone is excited to Blink-182 but I am VERY excited to see them. I’m sure everyone was disappointed when they dropped out last year, as I was, but I think because of that, they are going to make sure this show is epic and worth the wait.

My dad used to play Blink all the time when I was growing up and they really became a music staple for me. I was so excited when I finally got to see them in 2009 and that show was mind blowing for me. Because of that show, I found my love for live music and overall music for me. To this day, that is still one of my favorite shows. Now I get to see them, 10 years later, finally being of age to see a show alone. know Blink has gone through a lot of changes since starting their career but I think they have evolved with the culture and have managed to still be still be one of the best bands all these years later.

I don’t think I could ask for a better present than getting to see one of my favorite bands, Blink-182, on my birthday at my favorite festival (yeah, I work there and miiight be biased, but Blink is one of the best bands and Riot Fest is the best music festival out there.) If for some reason you’re trying to me at Riot Fest on Friday night, you’ll find me singing along to Blink somewhere in the crowd.”

The Flaming Lips aren’t a band I listen to often these days. When we were booking the festival and trying to think of awesome bands to play awesome albums the idea of The Lips playing Yoshimi came up. I thought they’d never go for it but a pretty quick “Yes” came back from their camp. I was stoked. Nostalgia hit me hard.

My twin sister introduced me to The Lips when we were in high school. I loved listening to their jammed out instrumentals alongside beautiful songs with existential and conceptual lyrics meant to evoke emotion and provoke intellectual discovery. The perfect band to listen to for a kid making the attempt to transition into adulthood.

Lollapalooza 2006 had perhaps the best lineup they’ve ever had (seriously, look it up). The Flaming Lips were on said bill. I had just completed my freshman year of college and was at the peak of my existentialism kick. My mother had actively begun supporting my and my sister’s live music habit and regularly attended concerts with us. I was hanging with my those two during The Flaming Lips set when they began to play “Do You Realize??” off of Yoshimi. In that song there’s a line that goes, “Do you realize that everyone you know someday will die,” and it hit me in the heart harder than any other musical moment had before.

Caroline Rose is not to be missed! Her 2018 album Loner is varied, catchy, and excellent front to back. If she’s not on your radar already, don’t sleep on this great Friday afternoon set!

Not one band embodies the soul of Riot better than Rancid.  With an innate ability to seamlessly transition from ska to Oi! to street to hardcore without losing identity, Rancid has been one of the few bands that has pushed the definition of punk rock.

Surely, one can hear whispers of their past melodic loyalties—2 Tone, Sparrer, Sham, The Clash and so forth.  But unlike other punk bands, they proudly stood on some broad shoulders, pivoted, and composed music that’s distinctly and uniquely Rancid. Because of that, they’re almost impossible to categorize. Just take a second and play “Hooligans” into “It’s Quite Alright” and you’ll hear it… you just know it’s fuckin’ Rancid.

Looking for a little more reading material ahead of Riot Fest? Read about this year’s full album performances here, essays on this year’s artists here, and interviews with the talent themselves here.