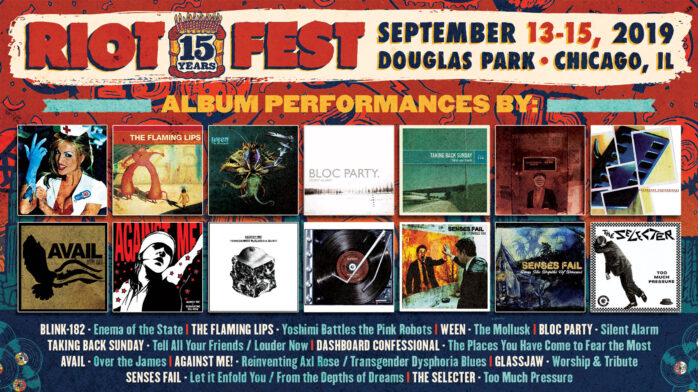 It wouldn’t be Riot Fest without a dazzling array of full album performances, and this year will be no different. This year’s selections will give fans the rare opportunity to hear some unforgettably classic records at our 15th anniversary festival—with a few bands carrying double duty, too.

✶ AGAINST ME! – Reinventing Axl Rose + Transgender Dysphoria Blues
✶ AVAIL – Over The James
✶ BLINK-182 – Enema of the State (20th Anniversary)
✶ BLOC PARTY – Silent Alarm (15th Anniversary)
✶ DASHBOARD CONFESSIONAL – The Places You Have Come To Fear The Most
✶ THE FLAMING LIPS – Yoshimi Battles the Pink Robots
✶ GLASSJAW –  Worship and Tribute
✶ THE SELECTER – Too Much Pressure
✶ SENSES FAIL – From the Depths of Dreams + Let It Enfold You
✶ TAKING BACK SUNDAY – Tell All Your Friends + Louder Now
✶ WEEN – The Mollusk

Tune in to the playlist below to listen through this year’s album plays, and read below for some insight about why these 14 records are so damn special. 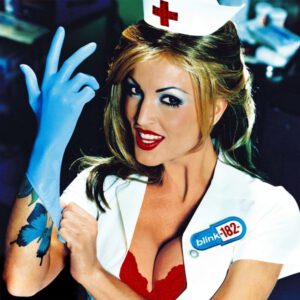 Enema of the State is the album that defined a generation of teenagers, a perfect snapshot of the looming shadow (or lack thereof) of maturity mixed with a trademark dose of sex-driven lyrical toilet humor. Veteran punk producer Jerry Finn, who’d return for the following two records, was brought in to give the record a more polished sound; It was also the first time we’d hear Travis Barker on drums, whose mix of intricate fills and varying tempos would complete the trio’s sound.

Enema of the State ultimately catapulted the band to fame, turning Blink-182 a household name as tracks like “Adam’s Song,” “All The Small Things,” and “What’s My Age Again?” dominated MTV, radio airwaves, CD players, and cassette decks everywhere. Selling over 15 million copies worldwide, it’s one of the most pivotal pop punk records ever made—and you’re going to hear the whole thing performed front-to-back at Riot Fest this year. Get ready to party to “The Party Song.” 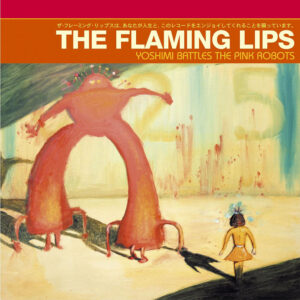 Wayne Coyne and company always put on a wildly imaginative show, but the return of The Flaming Lips to Riot Fest this year feels extra special with a rare performance of Yoshimi Battles the Pink Robots in the cards. It’s probably the most beautiful rendition of karate chopping, robot fighting action ever heard, one that deals heavily in musings of mortality and the passage of time.

While tracks like “Do You Realize??” and “Yoshimi Battles the Pink Robots, Pt. 1” are setlist staples for the band, deeper cuts like the trickling electronic melody “Ego Tripping At The Gates Of Hell” are scarcely heard live, making it a show not to be missed. 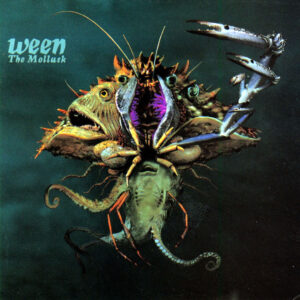 Ween is one of those bands that can never be properly encapsulated. They do whatever the hell they want—whether it be psychedelic, funkadelic, even slightly prophetic—and that’s the magic behind The Mollusk. That, and that the charming underwater theme carries some of the most oddly beautiful genre-bending songs to ever surface. It’s a cult classic with a pillar of admiration—the record was a central inspiration for late Stephen Hillenburg when creating SpongeBob SquarePants, and it’s often cited by Dean and Gene Ween as their favorite record they’ve ever made.

Worshippers of the mighty Boognish know that going to a Ween show carries a completely different setlist every show, filled with crazy covers and surprises. From the drunken sailor shanty “The Blarney Stone” to the lazily cruising “Pink Eye – On My Leg,” it’s the chance to hear a handful of rarely played, gorgeously weird songs that seldom leave the ocean floor.  This is the only time The Mollusk will be performed in its entirety, so it’s truly a once-in-a-lifetime opportunity. 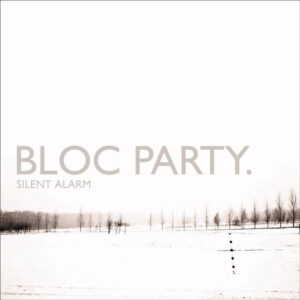 Silent Alarm, the debut record by British rock band Bloc Party, is a true indie post-punk masterpiece. It’s one of those first records where everything feels perfectly locked in place right off the bat; Razor sharp guitar riffs like those in “Helicopter” sound like a well-oiled machine operating at double the speed. It’s stood the test of time (on top of selling over a million copies), and feels just as energetic as it did 15 years ago. Riot Fest fans are in for a serious treat with this set. 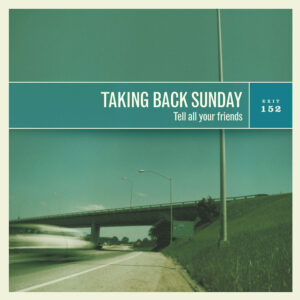 Taking Back Sunday is a Riot Fest regular, so it’s extremely fitting to see them back for our 15th anniversary with two full album performances planned. Tell All Your Friends is adored by its fans, and rightfully so: “Cute Without The ‘E’” and “You’re So Last Summer” are quintessential TBS tracks, all written and demoed in a small rented room in Lindenhurst, New York. 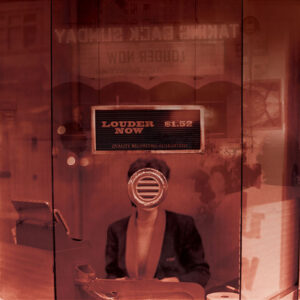 After the release of Tell All Your Friends, John Nolan (who would eventually return in 2010) left the band, and Louder Now was recorded with a more rock-oriented sound in mind, once again written in a small rented room. The work paid off, as heard on standout tracks “Makedamnsure” and “What’s It Feel Like to Be a Ghost,” and both records were later certified gold. You’ll hear both at this year’s Riot Fest. 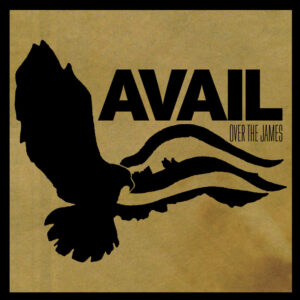 Richmond, Virginia punk heroes Avail are something of legends to their hometown, and Over The James is the record where it all came together. The ferocious melodic energy of Tim Barry’s songwriting was fully realized with the band’s 4th LP, celebrating a 21st birthday this year. Avail never officially threw in the towel, but it’s been over a decade since they last performed live. We couldn’t be more stoked to see them reunite at this year’s Riot Fest. 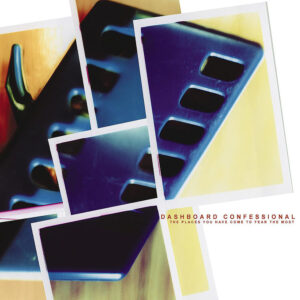 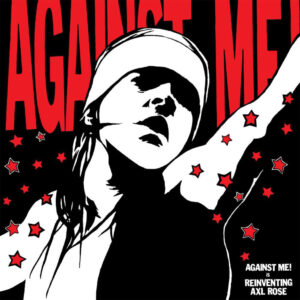 Against Me!’s dual album plays reflect both the beginning and the future of the band. Reinventing Axl Rose, its debut album, showcased the first fully formed iteration of the band; five of the LP’s songs had previously appeared on EPs made solely by frontwoman Laura Jane Grace. 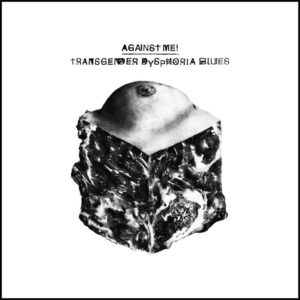 Over a decade later—after working on two albums with Butch Vig—the band expressed uncertainty in continuing. Grace had struggled with gender dysphoria since her childhood, until meeting a trans Against Me! fan inspired her to come out in 2012. The following year saw the exit of the band’s drummer and bassist that caused a cancelled tour with Bad Religion.

Acting as both the record’s engineer and producer, Grace projected her energy and struggles with gender dysphoria into the autobiographical Transgender Dysphoria Blues, a powerfully brave record now hailed as a fan favorite. 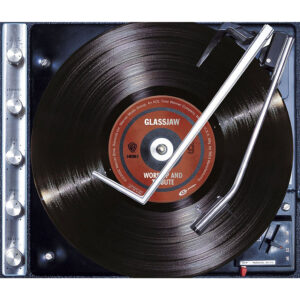 After a nasty breakup with their old record label, Glassjaw signed to Warner Bros. Records in 2001 and recorded their second LP, Worship and Tribute, considered by many as one of the greatest post-hardcore records of all time. The record showed off a more optimistic side of the group’s songwriting, incorporating shades of jazz and post-rock into its sound.

Whereas Glassjaw’s first record felt more like a collection of songs written in different places, Worship and Tribute was made with continuity in mind, and feels just as intense 17 years later. It’ll be a rousing time in the pit hearing it all the way through. 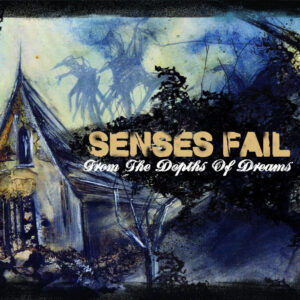 Senses Fail will be serving up two album performances this year, starting with From the Depths of Dreams. Technically an EP, the debut release saw a remastered reissue in 2003 with some extra tracks in hand. It was a pivotal point for the band’s beginning; Dreams caught some major label interest, which led to said reissue as a result of Senses Fail signing with Drive-Thru Records. 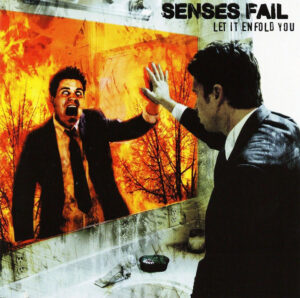 The same year, Senses Fail began work on what would become Let It Enfold You. The result was a very sleek, refined addition to the mid-2000s post-hardcore scene, one that went on to sell 500,000 copies—quite the feat for a frontman that was only 19 years old at the time. They’re super excited to finally return to Chicago after a cancelled show in January, and we’re thrilled to have them playing through two solid entries in their discography at this year’s fest. 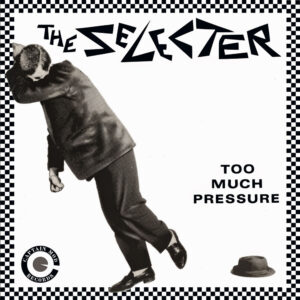 THE SELECTER
Too Much Pressure
1980

In honor of the band’s 40th birthday, The Selecter will play their debut album in full. It’s a ska-punk crossover blend of tracks that were born out of the success of the 1979 hit single, “On My Radio,” which topped the charts at the time. 2 Tone bands that weaved racial and social themes into their lyrics weren’t that common back in the day, and it feels even more uncommon to hear a record like this fully realized live 40 years later.