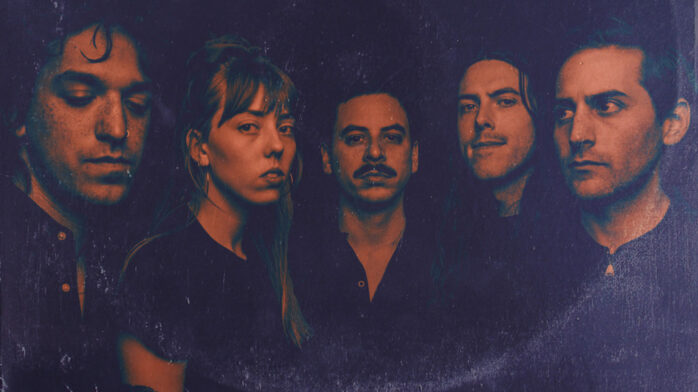 To Michael Santana and Adam Schubert, Cafe Racer has all the time in the world. The co-vocalists/guitarists are safely sitting six feet apart from each other at a public park as they talk to me over the phone about Shadow Talk, a record they’ve spent the last three years writing and recording. Despite the circumstances (and show cancellations), they’re both decently relaxed, working on creative projects at home. “It’s a good time to absorb music, culture, and ideas,” Santana says.

It has, without a doubt, been a struggle for many adjusting to the lack of live music around the country. (The cancellation of Cafe Racer’s opening slot for Deeper’s record release show here in Chicago, for one, especially sucked.) Thankfully, the best elements of a Cafe Racer gig have been well preserved on Shadow Talk, the band’s third full-length album. The two tracks released so far—“Faces,” a shimmering anthem with a massive hook, and “Zenith,” a sweet yet bristling upbeat rhythm—dish out perfect doses of the group’s live energy. The rest of the album, due out May 8, is worth the wait.

“I’m a lot happier with the product, having sat on songs that we literally recorded a year and a half ago,” Santana reflects. “We were able to give ourselves some space and breath from each song.” The songs on Shadow Talk were recorded in bursts of three or four tracks over a day or two, often fleshed out during studio time. It’d usually be a few months before they’d find the time to return to track more. “It was a more expansive way to go about songwriting,” Santana adds, but notes that the gradual stockpile of album-ready tracks was ultimately worthwhile.

The slower production pace proved beneficial in shaping the differences between Shadow Talk and the group’s last release, 2017’s Famous Dust. For one, Elise Poirier joined the band on drums shortly before they began writing the record, strengthening a rhythm section that includes bassist Rob McWilliams. As a whole, the group began to write together during rehearsals, lending each other’s influences into the record’s sound. “We have a wide range of pallets,” Santana says, citing his bandmates’ influences as everything from drone music to freak folk to psychedelia. “You can really hear the amalgamation of all five of our tastes on this record.” Schubert cites Wire as an undeniable influence; Santana’s a fan of the long, drawn-out song structures embraced by the likes of Sonic Youth and The Dream Syndicate.

Since we’ve all got nothing but time on our hands, Cafe Racer made us a playlist of twelve songs for you to completely space out to at home. Each track is at least five minutes in length in an effort to help you kill some time—so get comfy and don’t skip anything!

MICHAEL SANTANA: Amazing band. Crazy Rhythms… that album is spectacular. That band came out of the formation of punk music in the late 70s and very early 80s doing like, expansive versions of classic punk sounds. A lot of my musical past has been related to punk music, and I think that album—and this song, particularly—really blends a punk rock sound with something a little more visceral.

MS: There’s so many Sonic Youth songs that I could put on this list. They’re one of my favorite bands. The album Sonic Nurse was recommended to me by Brian Case (of the bands FACS and Disappears) when we worked together. He was the bar manager where I worked when I was bartending for a little bit—I was like, kind of starstruck when I found out I was gonna be working with Brian. [Laughs] He’s a huge influence in Chicago music and where my taste kind of lies. We’d talk about music all the time, and [one time] he was like, “You have to listen to Sonic Nurse. It’s my favorite later-era Sonic Youth record.” And then I just got super absorbed into it, particularly “Dripping Dream.” I think that it definitely inspired a lot of songs on Shadow Talk.

MS: I wanted to throw a nice ambient record on there. It’s a 10-minute-long track I really like to meditate to. I use it as kind of like a refresher… it’s a nice, soothing hyper-drone record. The whole record is probably like, 35-40 minutes, but it seems like it goes by so quick. It’s something to get lost in thought to—especially in a time like this where we’re passing the time and reflecting. Using music to meditate is a great tool in a time like this.

MS: That record is extremely inspirational to me, it’s a record called The Days Of Wine And Roses. I’m really just super into the first record—I can’t really get into their other stuff as much, but that first record is incredible. It’s like paisley punk inspired by The Velvet Underground: that loud, encapsulating wall of sound I love.

MS: Spacemen 3 was a big, big influence on Cafe Racer and multiple members of it. I think I really started delving into Spacemen 3 and Spiritualized when Andrew [Harper, guitars] came into project and started showcasing to me a lot of this music that I was like, “Wow, I know about this music, but I never took all the time in the world to really dive into it.” It’s just the perfect space rock. “Laser Guided Melodies” by Spiritualized is such a space rock masterpiece. Sonic Boom from Spacemen 3 actually mastered our last record, Famous Dust.

MS:  Today is like one of my favorite records of all time. Opening for Luna at Lincoln Hall six months ago, whenever we did that, was such a monumental milestone for me personally and for the band. The whole record is a banger. Like, every single song on that record is incredible. I could listen to it all the way through and not want to skip a single song. It almost sounds like Dean Wareham is like, stream-of-consciousness singing lyrics. It’s perfectly unperfect.

MS: Speaking of bands that jump around their influences and sounds: Yo La Tengo is one of those bands that I immediately think of. On that album specifically [I Can Hear The Heart Beating As One] there’s all kinds of sounds and styles of music. “Deeper Into Movies” is such a cool shoegaze nod—the vocals are so low and unintelligible and the guitars are so loud. I love that.

ADAM SCHUBERT: It’s got a lot of freaky folk shit going on in that record.

MS: Freaky folk, noise rock… It’s perfect. You can get lost in it, almost. It has that drone element to it.

AS: One of the first songs I ever heard by The Velvet Underground, from when I watched the movie Brick. It just has this very raw intensity that I really love. His lyrics are extremely aggressive, a no holds barred kind of feel.

AS: She’s from Chicago. She makes like, industrial techno music that I like skating to and biking to—really, doing anything to. It’s has a really solid house-y, trance-y thing to it, and it’s just done really, really well. She’s perfect at creating this sense of nostalgia that still feels new. It’s really amazing.

AS: The first song by Brian Jonestown Massacre I ever heard; I really liked how the vocals matched the guitar melodies, and that was a thing I was working on back when I first heard “She’s Gone.” It just goes on forever, this line gets stuck in your head like constantly over and over again. There’s no change. There’s no first chorus. It’s one thing for like, eight minutes. When you’re younger you think that music has to be verse-chorus-verse, so this song was really important for me growing up.

AS: This one’s like a sample with background noise. “Harm reduction” is a common term when you’re in a treatment program—when that record [I Had To Feed Larry’s Hawk] came out, I had just gotten sober, and it’s about getting sober in a way. I really related to it. The song reminds me of a newness, like an unforeseen change that’s pretty, but a little scary.

AS: I could have picked any one of their songs. It’s like the best “working” songs, I just will put it on when I—well, when I was working I would put it on at the store I worked at. One of their songs is like, 35 minutes long! I think for people who’ve never heard them, this song is the most accessible: it’s got a really good beat to it, a good rhythm, good melody lines, and it doesn’t go on for that long. You can really get into the drone feel but without having to listen to like, 30 minutes of just an organ.

Cafe Racer will unveil Shadow Talk to the world on May 8 via Born Yesterday Records. You can preorder a copy of the record on vinyl via BandCamp.
(Photo credit: Daniel Delgado)