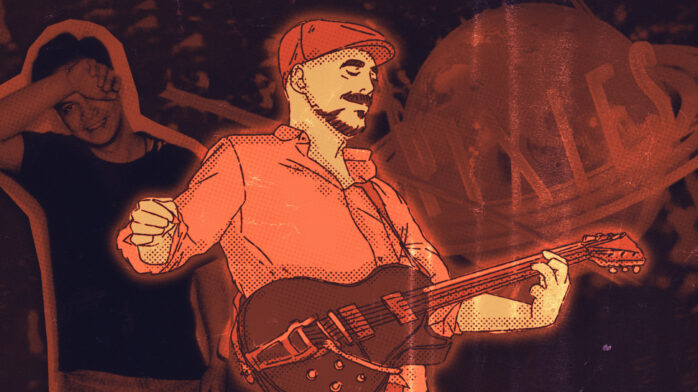 Pixies have long held the reputation of that band some bigger band emulated, to put it kindly. To Joey Santiago, the Pixies’ calculated lead guitarist, the secret recipe—the one pretty much every loud alternative act rolling into the 90s looked towards for inspiration—didn’t completely formulate until the band’s third full-length album, Bossanova, released 30 years ago today.

When Bossanova landed on August 13, 1990, fans and critics alike were mostly expecting another Doolittle, a wild success that was the product of a long, exhausting and nearly self-destructive recording experience. Bossanova was nearly the opposite: it lacked any pre-production going in (and lyrics, for that matter—Black Francis famously said he would scribble words on napkins just minutes before tracking them), and few demos were made ahead of time. The lack of planning going into the studio, as it turned out, broke ground for a Pixies record unlike any other.

With Bossanova, the band had cracked their own code—and on their second partnership with producer Gil Norton, they moved to scramble it rather than chase the tail of chart-toppers like “Monkey Gone to Heaven” (a song Santiago still doesn’t understand the hype around). By choice, the Pixies tweaked their formula to include elements of surf oldies and space rock fantasies, lyrically suffused with UFO sightings, desert delusions, and winding drives along the Great Salt Lake shores. Theremins waver through tracks like “Velouria” and “Is She Weird” where, despite the fury of tracks like the blistering “Rock Music,” the record explores a softer, chilled side of a band typically beholden to screeching mid-song outbursts.

Of the Pixies’ original four full-length efforts between 1988 and 1991, Bossanova is perhaps the most often looked over. 30 years later, it’s well worth revisiting. It’s not just a portrait of a band that was eager to delve deep into the unknown, far away from any set of rules: It’s a capsule of everything that makes the Pixies the lawless, influential rock group they remain today.

To celebrate the 30th anniversary of Bossanova, we caught up with Santiago on why it’s his favorite Pixies release, the surf groups that influenced it, and even touched on where the next Pixies record sits.

RIOT FEST: You’ve called Bossanova your favorite Pixies record more than a few times. What makes this record stand out to you from the rest of the Pixies catalog?

JOEY SANTIAGO: I like the variety of songs and the departure from the formula we had. It was evolving on this one, with “Velouria” for instance, and “All Over the World”… it had more of a soundtrack-y kind of vibe to it. The sonic aspect of the record I really like, it’s really lush and warm—and selfishly, I like the clean guitars I got out of it. I would say it’s the most melodic album from the old catalog that I’ve done guitar-wise.

Do you have a favorite track on the record?

I like the weird ones, like “Is She Weird.” I would say my favorite is “All Over the World.” It goes through different acts, through this crescendo… it’s got this little story at the end about a train derailing, and goes through a storyline that the music lifts up.

What was it like going back into the studio with Gil Norton for Bossanova after the success of Doolittle and the exhausting tour that followed it?

It was different in the sense that we didn’t do pre-production on this record. If we did… I forgot. [Laughs] A lot of the songs were put together in the studio, as I recall. We still managed to make a great record—and it said something about our chemistry, no matter if we got along or not. We’d established this factory that we go through: you do this, I do that, you do this, boom. That’s the sound of the Pixies. [Bossanova] is probably the first record I just said, “Oh, okay. We do have a style.”

There was an effort to include more of a surf influence on the record. You and Charles have a real soft spot for surf rock; Bossanova came out very much as the surf-y Pixies record of the bunch. What surf groups influenced your playing style?

Link Wray, The Ventures, Shadows, Dick Dale… those are the ones I could name on the top of my head. I guess the reason why we got into surf rock is because we both have guitars, and subconsciously, I suppose, it’s the most interesting way two guitars could react with each other. When we play, I veer off into some other space with a riff or a guitar line that’s not playing the chords, and that lends itself to surf rock. I try not to play the chords at all.

Maybe my favorite piece of the record is that it starts with a cover of an excellent surf oldie: “Cecilia Ann.” To me, it’s the “BEWARE OF THE DOG” sign that’s hanging on the front of the record; a huge, twisted surf riff that guards the rest of the record, which is much more tame in comparison. Where did the idea come from to open Bossanova with a Surftones song?

It was Charles that heard the song. If you’re into surf music, “Cecilia Ann” is like the B-side that should have been an A-side. I’d never heard of them until he presented it. It’s a great song. I don’t know if we immediately had the idea of opening up with an instrumental, but it seemed like the obvious choice.

At some point, everyone came up with a sequence for the record just for the hell of it. I’m pretty sure I chose “Cecilia Ann”; I’m pretty sure Charles chose it, and Gil chose it. Kim and Dave might have done the same, I don’t remember. It was a majority though, enough to make “Cecilia Ann” the first track.

Despite that massive opener—and the beastly chords on “Rock Music” right after—Bossanova strikes a sweeter side of Pixies, in many ways. “Ana” comes to mind, of course. “Havalina” at the end of the record sounds pretty different from anything you’d done before. There were a lot of soft gems mixed into the record.

Yeah. “Havalina” is a great ending to the album. It was Charles’ experience looking at the javelina in Sedona [Arizona], literally. That’s what the song was about, that moment in time where he saw that.

As far as the guitars are concerned… all I could really talk about in any interview was that “Havalina” is when I discovered double-stops. Fuck, who’s Elvis Presley’s guitar player? That wasn’t the influence, but he did it. I was listening to Albert Lee and he was doing a lot of those double-stops where you pick two notes at the same time—you kind of pluck them, rather than strumming them one at a time—and it just gives it a different flavor makes you think about the guitar a little differently.

Do you feel like there’s any major skill you’ve picked up as a guitarist from the start of the Pixies all the way to last year’s Beneath the Eyrie?

I’m at that position where I’ve embraced the people saying there’s a certain style I have. I always try to run away from it, but in the end it corners me again. But on that last one, Beneath the Eyrie, I was practicing a new way of interacting when we’re jamming where I just had to figure it out on the spot. Usually I need the chords, and then I need to go back into my room and analyze the fuck out of it—too much, sometimes. It started taking a toll. I tried a different approach to coming up with stuff, and hey, it worked.

You’re not the type of band to always have a plan, necessarily—but when you think of the immediate future of Pixies, what’s there?

Well, prior to COVID-19, we were in New Zealand recording demos for the new record. Well, it was already happening. This was in February. We had about ten days that we had to fill when [our dates in] Japan and Hong Kong were canceled, so we went to New Zealand and decided to book studio time. I had my nannies in place for my kids—they were already prepared that I was going to leave—so it was psychologically the right time and place to do that. We were going to kick off the next show in New Zealand in Auckland, so we just stayed there.

So the immediate future right now would probably be the record. That would be something that’s doable—I mean, we could practically social distance doing that. We could just pretend we’re making Trompe le Monde and go in one at a time. We definitely were social distancing making that record through just the tension. [Laughs]