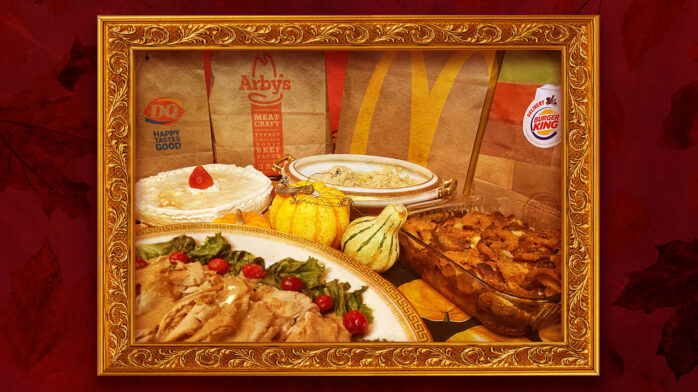 How to Disguise Fast Food as Your Own Thanksgiving Cooking

Thanksgiving—a day centered around eating two days’ worth of food in under an hour—is not a pandemic-proof holiday. With cases surging once again, many public officials are pleading for people to cancel their Thanksgiving meals and stay at home instead. And while it’s totally the safe thing to do, it’s a huge bummer for anyone who can’t cook to save themselves (see: me).

So if a fully-cooked turkey with the works isn’t something in the realm of possibility for you this year, all hope is not lost. There is a quick and easy way, and it’s (probably) right around the corner: fast food.

You read that correctly. Inspired by that legendary Simpsons scene where Principal Skinner serves his boss  “steamed hams” from a nearby Krusty Burger, we’re going to serve ourselves an unforgettable Thanksgiving dinner—using nothing but fast food to create a turkey dinner with mashed potatoes, stuffing, and dessert. Bust out your finest silverware and your cleanest-looking plates, folks: it’s time to fake up a feast.

For our main course, we’ll be fixing up a special lil’ something I like to call Arby’s Turkey Dinner Delight—because after all, who makes a better turkey sandwich than Arby’s? (You’re not allowed to answer that.) 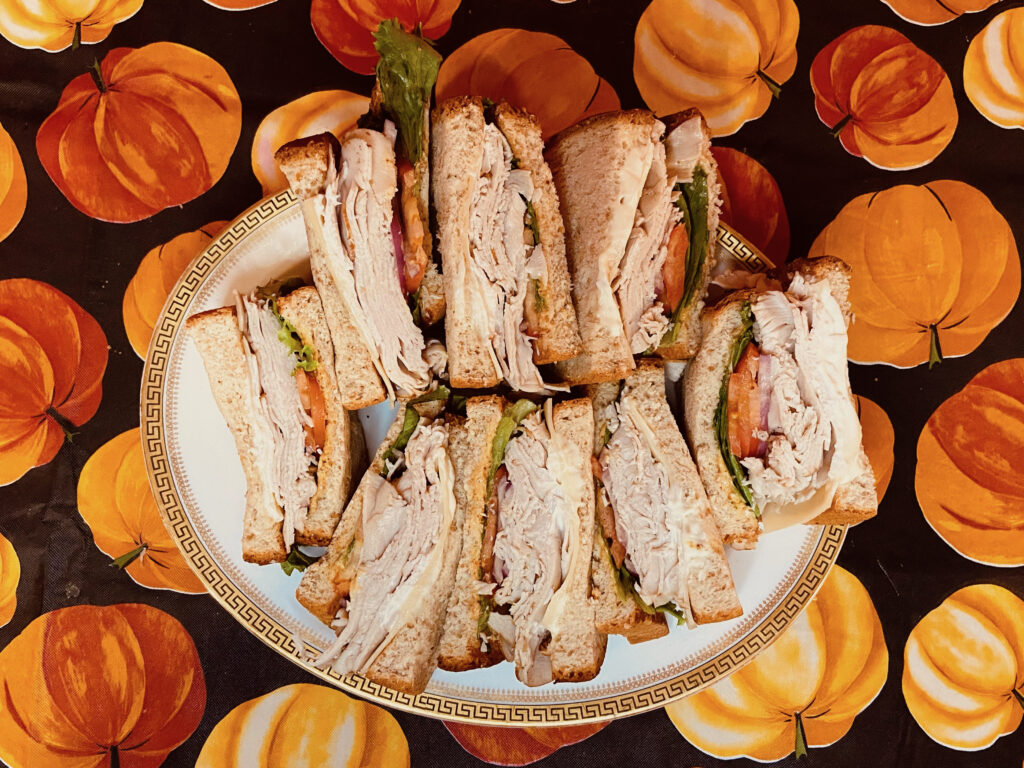 You’ll need four of Arby’s Roasted Turkey & Swiss sandwiches (Arby’s has an actual Thanksgiving sandwich with cranberry sauce, but sadly it wasn’t available at my local meatery). Take your four sandwiches and strip out all the turkey, saving nothing else but the lettuce. On the nicest serving platter you can find, carefully stack your meats in a long neat row to create the illusion that you actually cut a turkey.

Next, decorate the edges with your soggy Arby’s lettuce and anything else that feels right—I myself happened to find a bag of freezer-burnt cranberries stuffed in the back of my fridge. Smother that bird with some gravy, wipe off any leftover spicy brown honey mustard from the sandwich bread, and… voilà! 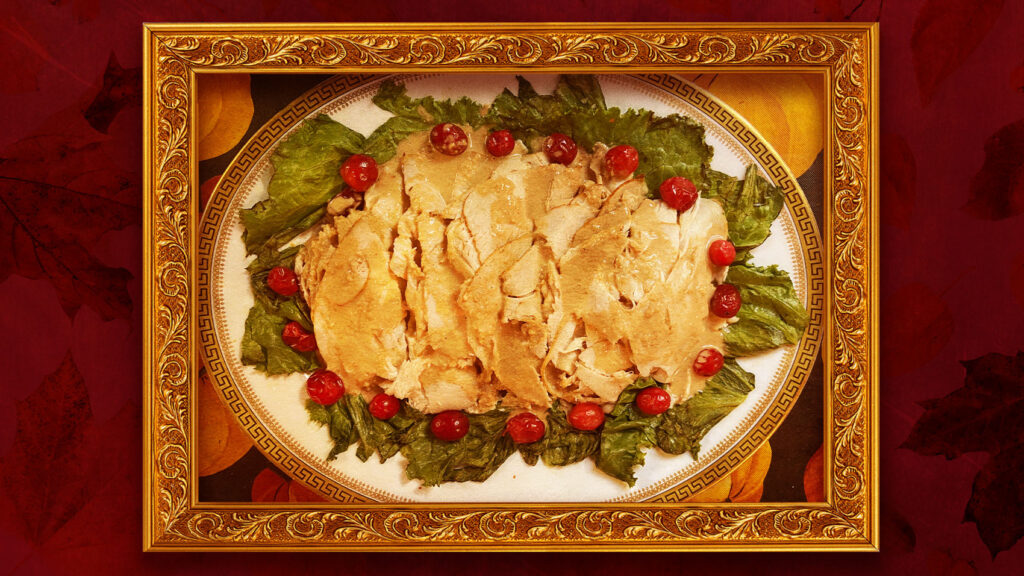 I should mention my one grave(y) mistake: I somehow completely forgot to order gravy. So instead, I used some of the “zesty sauce” that arrived with my Burger King order. Close enough!

I’ve heard a lot of talk this year about that White Castle stuffing recipe. White Castle, however, is the only restaurant that’s made me actually vomit solely due to the food being that bad. So in the spirit of good health and originality, we’ll be making a first-in-history (as far as I know) dish: The Whopper Jr. Stuffing. 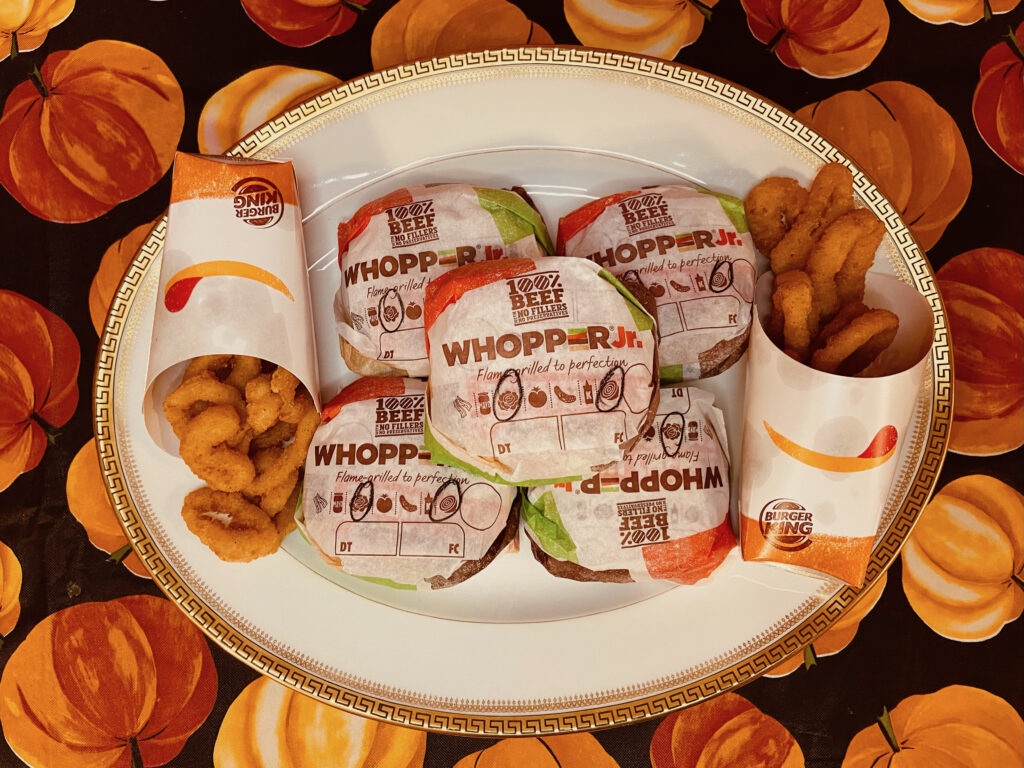 For a medium-sized dish, five Whoppers (with just onions and lettuce on top) should suffice—and since all great stuffing comes loaded with onions, why don’t we throw in two orders of onion rings in as well? Dice up your burgers into cubes and dump them in a square, oven-ready dish. 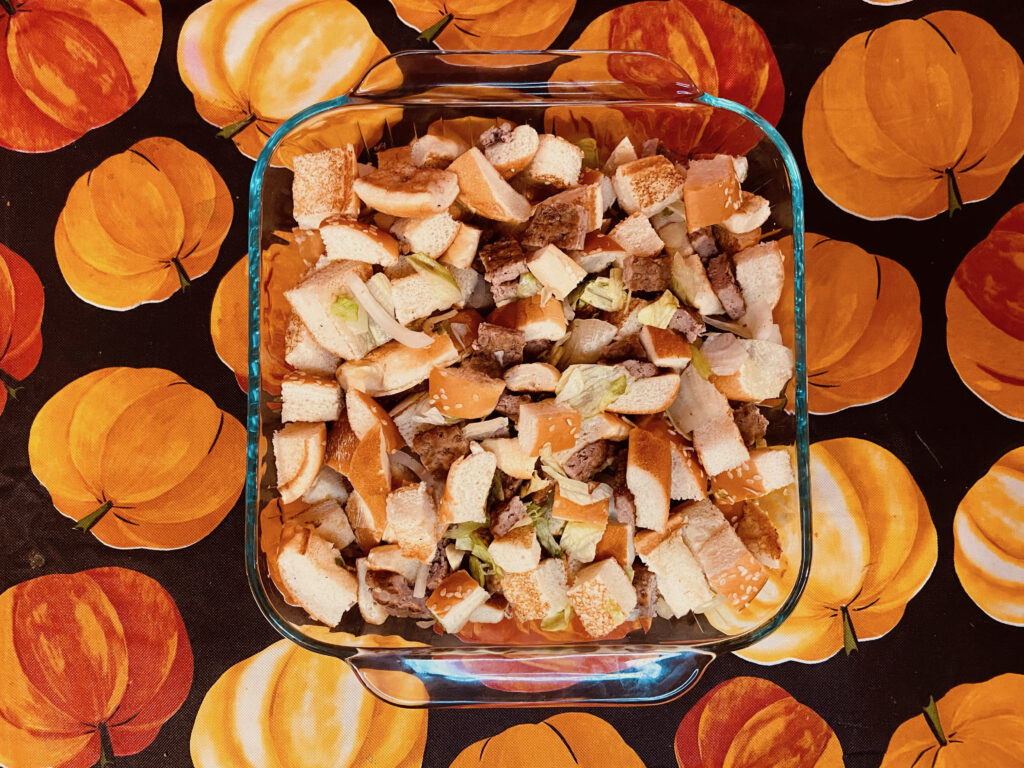 Then, you’ll want to garnish it with some chicken broth to help it cook. I didn’t have any, so I used Campbell’s cream of chicken (which, let me tell you, looks nasty). I think you’re supposed to put other things in stuffing, but I can’t really remember, so it’s probably nothing important. Stick it in the oven and let it cook for 45 minutes at 400°, or until it looks crispy and brown like this: 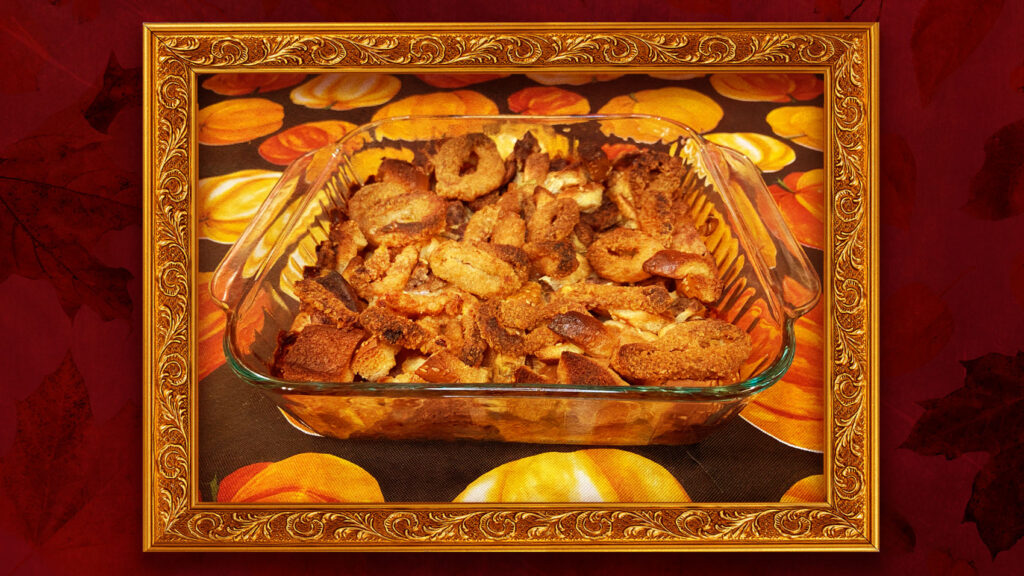 Over at the Riot Fest headquarters, the “best fast food fries” argument pops up at least once a month. Some of my coworkers—who will remain nameless—have some truly terrible takes on this topic (namely, defending Burger King’s cardboard flavored fries). Regardless, I think most can agree that McDonald’s fries are a timeless salty side. We’re going to dump those in a blender to create our next fast-erpiece: The McMashed Potatoes.

Basically, you’re just going to dump three large orders of fries into a blender and go buck wild. It sounds really fun, and that’s because it is really fun. Just make sure to add a little water or milk whenever the fun (AKA the blender) stops. Once it’s all nice and soft, scoop it all into a fancy serving bowl and soak those spuds in as much butter as you can handle. Lastly, garnish your McMashed Potatoes with anything green in your kitchen cupboard—it doesn’t really matter how it tastes so long as it’s stylish, right? Right. 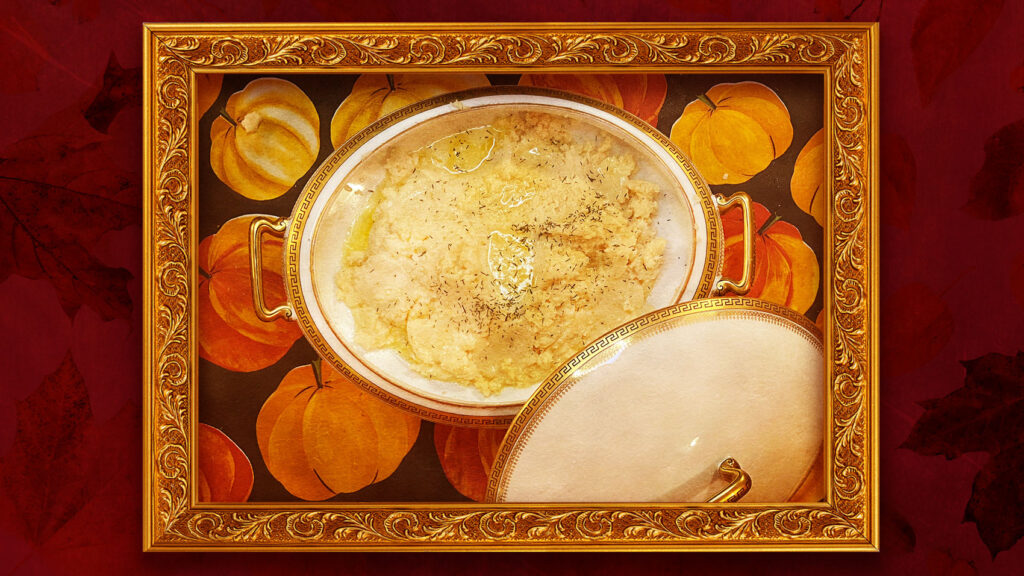 The Blizzard Pumpkin Pie is our last (and longest-taking) recipe to seal the deal on this grease feast. Unsurprisingly, not many fast food plates do pumpkin stuff, but Dairy Queen sure does: real pumpkin pie pieces, whipped cream and nutmeg make up these bad boys. 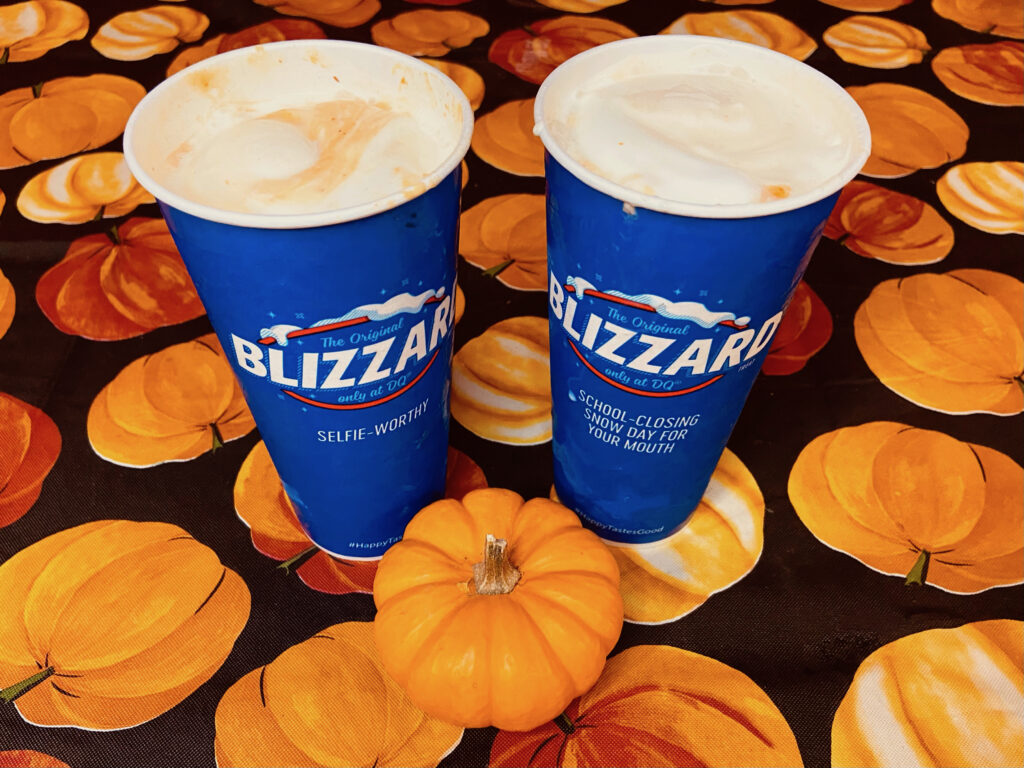 We’re going to turn two large Blizzards into an ice cream pie. Using a spring form pan (you have one of those, right?), pour the Blizzards into the tray and let it freeze overnight. 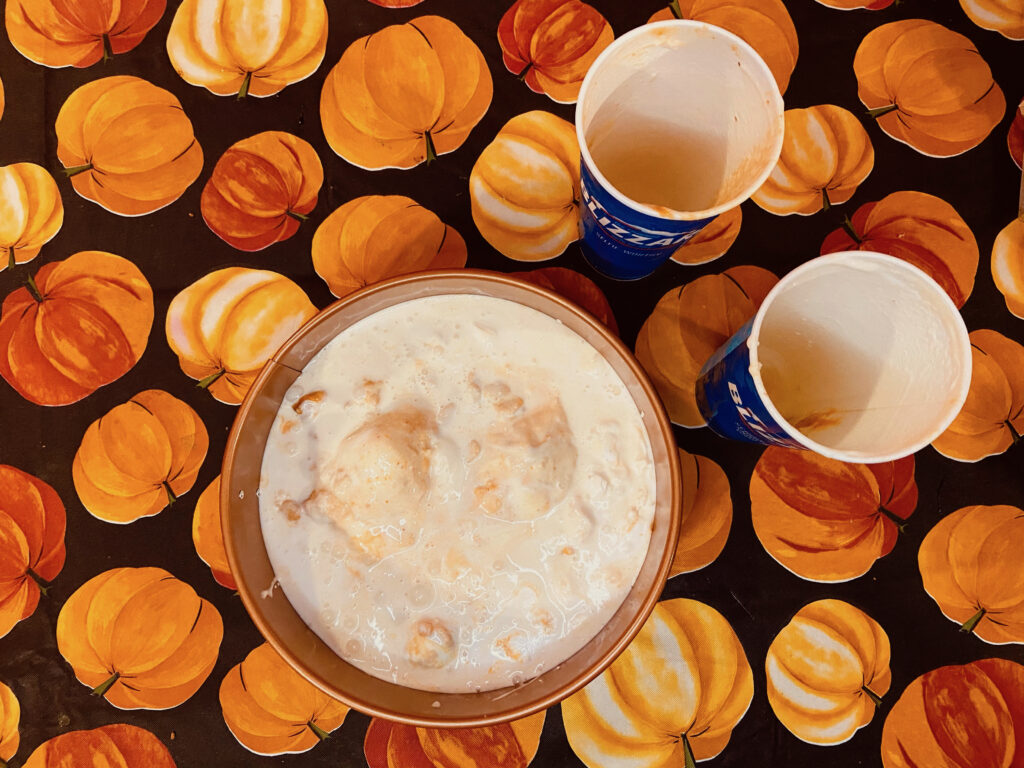 Once it’s removed from your freezer, carefully pull the sides of the pan off to reveal your perfectly shaped frozen pie. Decorate it with whipped cream, strawberries, or whatever else you’ve got laying around. The result: 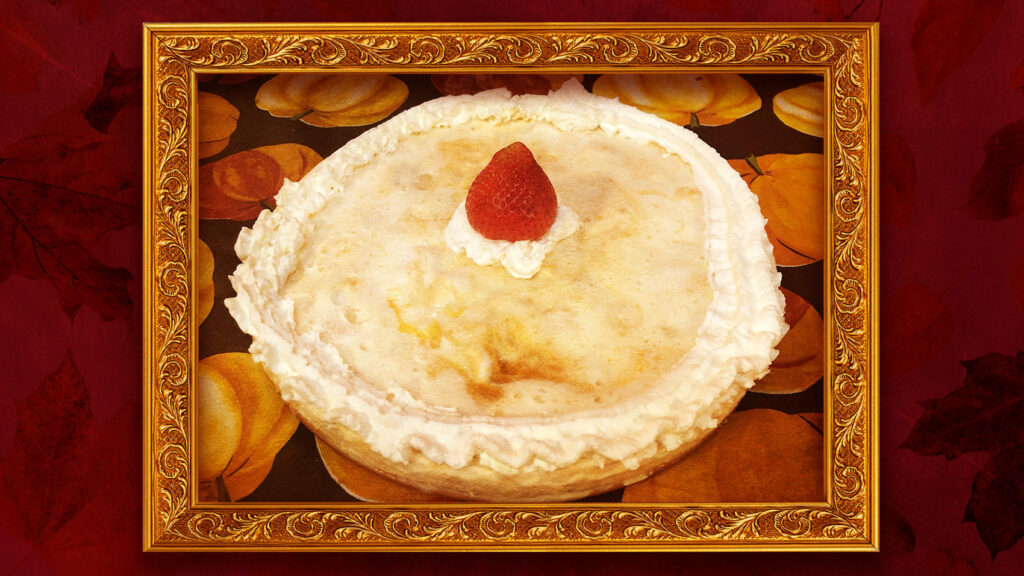 And with that, you’ve done it. You turned an ungodly amount of drive-thru food into a palatable, presentable four-course dinner. Your parents will be proud when they see what you “cooked” all by yourself—just be sure to actually taste it before you eat any of it on a Zoom call (because we totally didn’t taste any of this). Enjoy!

Want to see those fries hit the blender? Of course you do. We’re on TikTok now—you can watch the magic happen below. Happy Thanksgiving from everyone here at Riot Fest!

@riotfestNo clue what to make for #thanksgiving? Feast your eyes on this fast food cooking guide we made for you. #fyp #FamilyRecipe #foodtiktok #riotfest