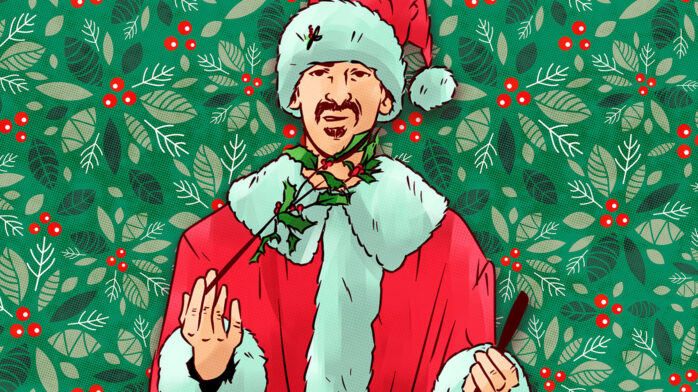 An unexpected Christmas combo—and a few words from the guy who discovered it
By Emily Reily / December 9, 2020 / Holiday, Music

As we near the blessed end of 2020, let’s revisit the time Frank Zappa and the Mothers of Invention inspired some fans to combine the group’s experimental music with a fragment of America’s decaying pop-culture symbolism: Santa Claus. Gather ‘round the computer and burn some incense—it’s time to experience “Twas The Night Before Christmas” through the twisted mindset of Zappa’s avant-garde song “Absolutely Free,” thanks to one fan, his brother Bob, and a little help from the Yippies.

First, a little background: “Absolutely Free,” from the Mothers album We’re Only In It For the Money, just so happens to sync up nearly perfectly with a black-and-white short from 1946—a visual narration of the traditional Clement Clarke Moore poem “Twas The Night Before Christmas.” The nine-minute short blends live action with animation, and features an uncharacteristically giddy moon, humanized eggs dancing over sleeping children’s heads, and a mouse who looks more like a rat. The mashup itself—discovered nearly five decades ago—is the work of Zappa fan and Oakland, California resident Richard McQuillan (plus his brother, Bob). See it for yourself:

“It all started when our oldest sister was seeing one of the founding members of the Youth International Party (the Yippies),” McQuillan told us, referring to the counterculture group founded in 1967 by political activist Abby Hoffman. Richard says the boyfriend was eager to share his stash of Zappa materials. “He did us the tremendous favor of loaning us his Mothers of Invention albums, for which [Bob and I] remain eternally grateful.”

McQuillan says the fluke mashup idea likely occurred in the summer of 1968, when he was 14 and Bob was 8. The two—who would often listen to records with the TV on and the sound off—were watching an 8mm film reel of the aforementioned Christmas short when they discovered a section of the film synced up with the lyrics and beat of the Zappa track. McQuillan says Zappa’s “on Donner and Blitzen” lyric was an obvious sign that links both pieces of pop culture. The relationship is uncanny, right down to the image of Santa laughing like a bowl full of jelly. “The words seemed to fit the action almost precisely. Call it serendipity,” McQuillan says.

As for what  Zappa really thought about the holiday itself? “Frank had to be dragged up from the basement because he hated Christmas,” confirmed Zappa secretary Pauline Butcher Bird once confirmed. Sounds about right.

There’s more than one reason to celebrate Zappa this Christmas, though: The authorized documentary Zappa—directed by Alex Winter, the “Bill” of Bill & Ted’s Excellent Adventure—treats fans to brand-spanking-new footage of the prolific musician. The film was released Nov. 27 and can hopefully carry you through the rest of the year; Watch the trailer to get a taste.