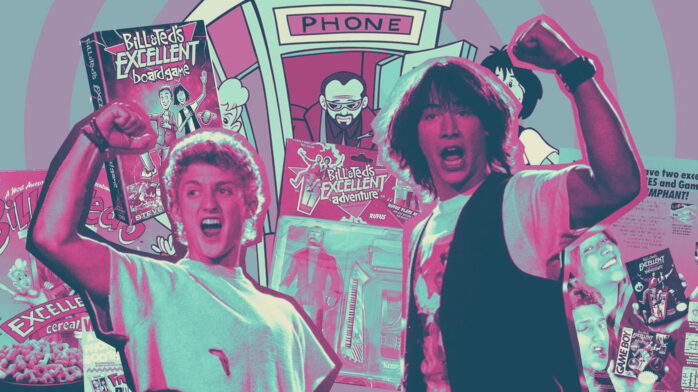 Bill & Ted’s Excellent Adventure (working title: Dudes) debuted 30 years ago, a film about two dim high schoolers traveling through space and time in a phone booth, picking up famous figures to help them pass their history presentation. Bill & Ted scored big at the box office, but promoters were prepared for the next step. They marketed anything they could get their grubby hands on and aimed it at unsuspecting teens: a breakfast cereal, a cartoon, clothing, a TV show, video games, action figures, and even a theme park.

The vast majority of these spinoffs have been thankfully lost to time, with most endeavors suffering quick and painless deaths. But as Alex Winter and Keanu Reeves—who play Bill & Ted respectively—recently announced a third Bill & Ted movie due next year, marketers have another reason to crack their knuckles.

Hollywood’s perception of what a “teen” is has changed drastically since 1989. From the 80s into the 90s, teen movie characters were often portrayed as “bad seeds” or “dumb” (with the exception of all John Hughes teen movies). Their preconceived lack of intelligence was reflected in the way they dressed—ripped jeans, oversized plaid and Ted’s weird black vest—and for the way they talked, using phrases like “Excellent!” and “Party On!” You get the idea.

The guys in these comedy/adventure movies (who were almost always guys) were also garden-variety slackers who, as best buds, were thrust into extraordinary circumstances. Marty McFly was one of the first famous modern teen slackers in the movies, given that rap by Principal Mr. Strickland in Back To The Future in 1985. Just like McFly, Bill & Ted were slackers—along with Pauly Shore and Sean Astin in Encino Man, Romy and Michele in Romy and Michele’s High School Reunion, and just about everyone everyone in Clerks and Wayne’s World. These slackers were pitted against the bad guys: any and all adults, the teacher who wants to fail them, or the Grim Reaper in Bill & Ted’s Bogus Journey.

High schoolers had good reason to be wary of adults—they were usually the ones calling the shots, and did seem responsible for teens’ miserable existence. Kids of any generation feel like their life is shit—they’re stuck in class, or dealing with a bully, or failing math, or maybe just can’t talk to that one girl. Teens are outsiders, and they need an outlet. Seeing Bill & Ted in the theaters was a fantasy, an escape route away from a dull existence. But why were teens attracted to Bill and Ted’s particular escape mechanism, which was traveling through time and grabbing historical dudes?

Perhaps it’s simply because Bill and Ted were just likable guys. They were easygoing, friendly teens who happened to have no clue about history—they called Socrates “So-crates,” for one thing. Their chosen adventure, the film’s escape route, just happened to be flying through time in a telephone booth. It wasn’t about the journey; it was about two high school kids and the badass historical figures they stumbled across.

The aforementioned badasses in Bill & Ted’s Excellent Adventure were rebels themselves. Joan of Arc claimed to have visions of different saints who told her to help save France in the Hundred Years War. She was burned at the stake at 19. Billy the Kid was a robber and an outlaw in the Wild West who killed eight men. He was shot to death when he was 21. Socrates went against the grain and was a critic of those around him—his questioning of people who were considered wise at the time made others look bad, and led to his punishment of poison. Bill and Ted were our allies, in a sense; they may not have done anything as dramatic as those famous figures, but at least they got to meet some heroic people and actually learn about them a little bit.

But as time went on, slackers became slayers. Teen comedy sci-fi franchises from the 90s through today still put an emphasis on clothing and teen slang, but high schoolers have since been portrayed as more intelligent and, dare we say, more clever.

Buffy the Vampire Slayer, the original 1992 movie with Kristy Swanson and the late great Luke Perry, lacked the bite that creator Joss Whedon originally intended, but he was able to make amends with his hugely successful TV show spinoff. The television incarnation of Buffy, about an average high school student with the singular power to annihilate bloodsuckers, made Sarah Michelle Gellar a household name and spawned a vampire social media culture that’s still running strong.

Buffy also showed teens actively working alongside adults to solve serious crimes, such as finding out which vampire bit the biology teacher this week. Buffy and her clique getting the chance to work in tandem with adults must have been seen as a triumph for teen viewers, since that meant there was a chance they could be respected for who they were. And though adults were seen as older and wiser, their willingness to listen to a younger generation of millenials was a sign to the teens that they weren’t alone—they had more allies than they realized.

Bill and Ted, in a way, get their wish fulfillment by passing their history test and showing the teacher they’re not stupid; Buffy and her friends solving crimes (and therefore, their problems) was wish fulfillment in a more forensic sense.

Riverdale, a teen drama based on characters from the long-running Archie Comics, also portrays high school kids as intelligent, thoughtful people with a maze of emotions. Again, like Bill and Ted, Jughead, Veronica and the guys are going through what can be the best and worst years of their lives. But Bill & Ted’s Excellent Adventure was meant to be a comedy, not a drama, so going too deep into teen existential crises would have defeated the purpose of the movie.

These days, Hollywood doesn’t seem so afraid to get dark. The pressure and responsibility on teens to make good in the world has only accelerated since 1989. Last year’s Ready Player One pitted geeky teen Wade Watts against the future decline of Western civilization and the onslaught of global warming, further stoking a harsh dystopia (not unlike what we’re going through right now). The movie even has Wade role-playing Matthew Broderick’s character in the 1983 film War Games.

Still, the further we get from Bill & Ted’s Excellent Adventure, the more difficult it would seem to draw connections between those two and modern characters like Wade. Leave it to Steven Spielberg to acknowledge and fix that so-called age gap: Spielberg, Ready Player One’s director and producer, went to painstaking efforts to make sure that time-honored pop culture references were properly represented. Bill & Ted is mentioned by OASIS co-creator James Halliday in the movie, hinting at how to win a race challenge: “Why can’t we go backwards for once? Backwards, really fast. Fast as we can. Really put the pedal to the metal, you know! Bill & Ted did it.”

It’s clear that teen films lean on previous classics and sound bites to create a kaleidoscope of memories for new generations. But will Bill and Ted still be relevant to today’s youth when the third movie is released? Is the slacker generation really dead? Only time—and the ever-growing limits of moviemaking—will tell.

90s back to the future bill & ted's excellent adventure film