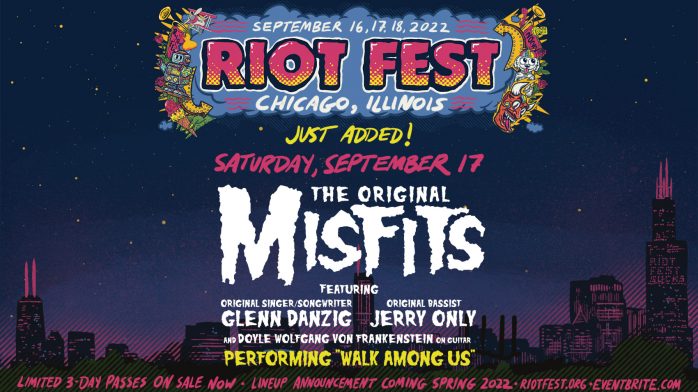 JUST ANNOUNCED: The Original Misfits will headline Riot Fest 2022, performing their landmark first album Walk Among Us in full for its 40th anniversary! They’ll be joined by the long-awaited return of My Chemical Romance, September 16–18 in Chicago, IL. 3-day passes for next year’s festival are ON SALE NOW.

The Misfits’ 1982 debut Walk Among Us, celebrating its 40th anniversary next year, is a debut hailed as one of the greatest punk records of all time. There’s no doubt that all hell will break loose when Glenn Danzig, Jerry Only, and Doyle Wolfgang von Frankenstein take the stage to play it front-to-back at Riot Fest.

Single-day passes for 2021 will go on sale this week, alongside more band announcements for 2021. (Ticket transfers to next year, as well as refunds, are now available.)